NEW YORK — Sustaining success in the fine jewelry industry is hard work, but few before designer Robin Rotenier had ever compared it to a boxing match.

“When you jump into the ring for the first time, you exhaust yourself,”... 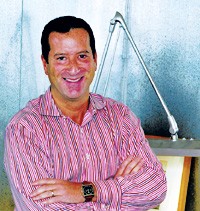 NEW YORK — Sustaining success in the fine jewelry industry is hard work, but few before designer Robin Rotenier had ever compared it to a boxing match.

“When you jump into the ring for the first time, you exhaust yourself,” said Rotenier, sitting in his office on 45th Street here. “After 15, 20 seconds you’re on the canvas and can’t breathe because you’ve got your stance up and you’re busy, busy, busy. With experience, you learn to relax your arms, your legs, move around, breathe, catch up. I make a parallel [with fine jewelry]. If I did this without stopping I would exhaust myself and be the most miserable person. But over the years, I’ve learned when to apply pressure, when to relax, and when to enjoy myself.”

Approaching his 10th year as a designer, Rotenier, a boxer by hobby, is focused on strengthening the business he has developed.

The Paris-born designer started his career in advertising when he moved to New York 20 years ago, but took jewelry-making classes on the side. Eventually he began freelance designing for other jewelers, but soon realized how he needed to direct his efforts.

“When it was time to make a matching piece for a collection,” he said, “I had no problem. But within weeks the jobs evolved into, ‘Why don’t you design an entire group?’ And that’s when I could not emotionally do it. I could not create something for somebody else and not put my name on it.”

He started his handmade collection in 1994 with earrings and necklaces featuring his now signature brushed silver and 18-karat gold squares and discs with tiny stones in the middle.

Retail prices of his collection range from $185 for a sterling silver earring up to $20,000 for a limited edition or one-of-a-kind item. Seventy percent of the line, however, falls in the $500 to $2,000 range, Rotenier said.

Most of his time now is split between designing and making personal appearances — last week he was at Neiman Marcus stores in Chicago and Houston and spent a day or two selling at Bergdorf Goodman and Saks Fifth Avenue here. In the last two years, the brand has seen 30 percent growth due to a focused yet expanded distribution, Rotenier said, though he declined to disclose specific volume figures. Currently the collection is carried in 100 doors, and he’d like to add between 20 to 40 accounts in the next five years. He has no plans of opening a store but wants to focus on bolstering awareness of the brand — and the man behind it.

“You want to create as many reasons for your customers to buy your link bracelets versus the other 20 link bracelets in the case,” Rotenier explained. “They need to know that it’s not made by a robot. So that’s the number- one thing, to constantly remind them there’s a human being behind this.”