NEW YORK — Fashion week ended with a bang — and with some quiet moments.

Late Tuesday night, for example, it was difficult to ignore the call of the siren looks — they were stalking Nick Morley’s Buddhist Punk... 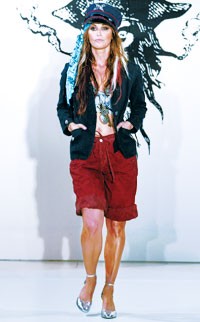 NEW YORK — Fashion week ended with a bang — and with some quiet moments.

Late Tuesday night, for example, it was difficult to ignore the call of the siren looks — they were stalking Nick Morley’s Buddhist Punk runway. In his first runway presentation, the London-based Morley provided what was probably the loudest, brashest, most rock ’n’ roll event of the week. Steven Tyler, Norman Reedus, Rosario Dawson, The Cult’s Ian Astbury, Patti Hansen and others watched as Lizzie Jagger, the Richards sisters and Gina Gershon walked out in buccaneer chic, worked-in mermaid prints and trimmed with seashells and spangles. Now four years old, the Buddhist Punk collection has long been a favorite with the old-guard rock set — it was the official uniform of the Rolling Stones’ tour last year. But Morley is looking to expand beyond his usual shredded-sweats-and-T-shirt shtick, thus the silver-edged caftans and slinky frocks. “It was the most feminine collection I’ve ever done,” he said. True, there were some pretty embroideries trimming flirty jackets and up the sides of silken knickers, but up close, they were actually a skull-and-bones motif.

Elsewhere, Sandoval’s Francisco Chaydez and Michael Carbaugh came through with an impressive sophomore effort that built on the sophisticated, well-crafted look of their fall line. By private appointment, they showed slim, tailored linen suits and pants, as well as a few intricately worked, sandblasted charmeuse dresses. They are clearly designers to watch.

Lynn Park may have called her spring collection “Goddess,” but she filled the runway with girls that were more reminiscent of the fairies in children’s books. Stovepipe jeans and jackets came in sharply cut mint and peach Ultrasuede, while floral-printed chiffon was delicately smocked into pretty dresses and tops. The chiffon-covered, charmeuse jagged-hemmed dresses in berry or sand were pretty for any latter-day sprite, but when Park used the second fabric on its own in dresses and pants, the results looked cheap.

Creative director Makiko Minagawa went into the woods for the spring HaaT line from Issey Miyake with a collection inspired by gardens. As always, textiles were the focal point — dyed, bleached and hand-painted with traditional techniques for that handcrafted appeal — in looks that included tweed jackets, wraparound skirts and jacquard skirts and pants. The Issey Miyake company also showed Me, a line created by a design team, which had a much younger feeling. Standouts included the Miyake version of the jeans jacket, made of bumpy “cauliflower” cotton cut to resemble denim.

Jada Marie Simons of Mariemarie sent out a collection featuring bright swaths of tissue cotton jersey and crinkled silk chiffon in the form of loose-fitting numbers, such as a chiffon strapless wrap top that doubled as a skirt. Barbara Harris also went bright with her Multi By Bree collection of separates and eveningwear — maybe too much so. No one, for example, wants to dress head-to-toe in mustard separates.

Lindy and Kathy Jones, meanwhile, took the rags-to-riches approach with their Palmer Jones collection, and it was the rags that worked, such as a black-and-white tweed, rag-edged jacket and the terrific, swingy rag dress in a black-and-white polkadot silk chiffon. And H. Fredriksson designer Helena Fredriksson twisted and draped the fabric du jour — jersey — into Ts, halters and skirts silk-screened with custom-made nature prints, while Persia’s designer, Persia Tatar, showed a spunky black-and-white-striped one-shoulder dress.

Toning it down a notch may be an improvement in itself for veteran designer B. Michael, but his spring collection of dresses was actually quite conventional. Designer Victor de Souza also showed rather ordinary looks in the form of draped, flouncy dresses and skirts for his de Souza line. And designer Laura Poretzky’s debut showing of feminine ready-to-wear looks for Abaeté was a bit middle-of-the-road, too, with the exception of a charming black shorts jumpsuit and a couple of pretty handkerchief skirts.