Streetwear label Buddhist Punk is making the most of its musical roots, from designing a line of rock T-shirts to putting its own spin on the Fender Stratocaster guitar. 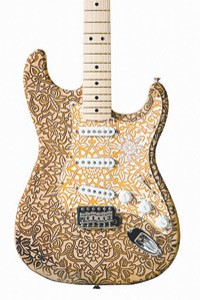 LONDON — Streetwear label Buddhist Punk is making the most of its musical roots, from designing a line of rock T-shirts to putting its own spin on the Fender Stratocaster guitar.

The six-year-old line first made its name creating a capsule collection for the Rolling Stones’ tour in 2002, complete with prints of the band on T-shirts, vests and dresses. Since then, the label’s higher-end line went on to show in Los Angeles and New York before returning to London for the fall 2007 collection.

Now Rupert Meaker, co-founder of the company, wants to honor the label’s punk spirit and democratize its appeal. Meaker has launched House of the Gods, a diffusion line of cotton and jersey T-shirts, denim vests and military jackets that previewed last week at Barcelona’s Bread and Butter Fair. The line’s wholesale prices range from $26 for a T-shirt to $33 for a jersey dress and $70 for a military jacket.

“A mainline Buddhist Punk T-shirt retails from about $110, which is out of reach for most consumers,” Meaker said. “The House of the Gods line will have simple pieces, but there are a lot of design features there — it doesn’t look like it has come off a production line. It has a hand-made feel.”

Meaker added that the diffusion line, which will launch a capsule range for fall, will also enable the label to produce more editorial pieces for the mainline collection, which is by British designers Adam Entwistle and Emma Hales.

The mainline collection, which for fall features stripy cotton dresses to metallic dresses and felt appliquéd skirts, retails in Harrods, Harvey Nichols and Selfridges in London and Dover Street Market, and Fred Segal and Kitson in Los Angeles. Prices range from $110 for a cotton T-shirt to $451 for a silk dress with sequined embellishment.

Along with continuing to collaborate with the Rolling Stones on their Bigger Bang world tour, the label was tapped to design a Fender Stratocaster for Rock Chic, a charitable program that raises money through collaborations with David LaChapelle, Philippe Starck and Hedi Slimane, among others. Buddhist Punk’s guitar, with an intricate Arabic print, was inspired by Jimi Hendrix.

“We thought it was perfect as he was the best-known Fender guitarist of all time. We even wrote a message to him inside the guitar,” Meaker said.