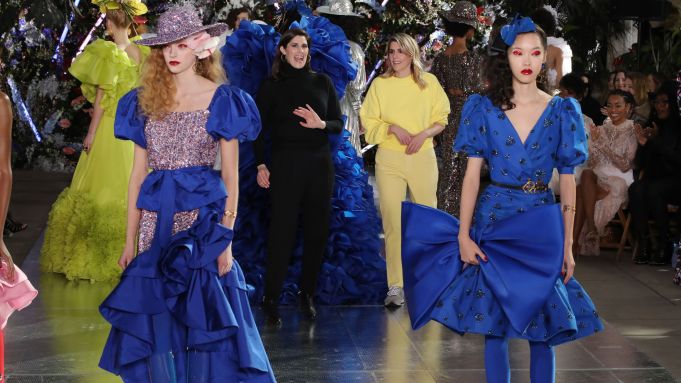 SAN MARINO, Calif. — It started with a bow, then a dramatic blue and the rest unfolded into what Kate and Laura Mulleavy presented Tuesday as their fall collection.

The gowns, high-waisted trousers, billowing blouses and wide-leg pants were as dramatic as the location at the Huntington Library, Art Collections and Botanical Gardens — a research institution containing a library, art collections and some 120 acres of gardens.

The setting brings the Mulleavys full circle having grown up in the area. Their grandmother also served as a docent there, with the two frequenting the property, sketching collections on site and being inspired by the gardens for their spring 2007 collection.

“We feel like everything for us is so California-inspired and there’s an ebb and flow to everything,” Kate Mulleavy said. “We did a museum show at the National Museum of Women in the Arts, and when we were going through our archive, we would see that [California] thread, whether it was nature or film, and it just felt like it would be amazing to do this here.”

To See Scenes from the Front Row, Click Here

It was a coup for the Huntington, with Rodarte representing the first fashion show held on the grounds established by California businessman Henry E. Huntington, president of the Pacific Electric Railway Co. and descendent of railroad tycoon Collis Potter Huntington.

“We’ve been talking with the Mulleavy sisters for years because they got a lot of inspiration from here as youngsters,” said Susan Turner-Lowe, the Huntington’s vice president of communications and marketing.

Musicals from the Thirties, Seventies and Eighties became the backbone of the season, taking the looks across decades, anchored by Jerry Hall-inspired hair on the models as they floated down the runway in two-piece sequined numbers and shimmering metallic looks. Other parts of the collection featured strong shoulders with plenty of volume and tiers of ruffles with the bow print across looks — sometimes exaggerated and in other cases more daintily woven in. That was all set against a palette of lipstick red, brilliant blue, cotton candy pink, black-and-white and floral motifs.

“I think we’re still feeling it,” said Laura Mulleavy backstage after the show of where their inspiration is derived from, noting how much the collection bounces from one era to another.

“I thought [the collection] was just like them: magical, romantic, inspiring and a moment that takes you away from the doldrums of life,” said Lynda Resnick, the billionaire businesswoman who, with husband Stewart, owns The Wonderful Co. (holdings include Pom Wonderful and Fiji water).

Guests sipped on her JNSQ’s rosé — which launched at the event — after the show as she went on to note, “[The Mulleavys are] from California; our wines are from California, but we both have this French accent about what we do. So it was just the perfect way to launch the brand.”

Tracee Ellis Ross managed to rush backstage as soon as the show capped to be one of the first to gush, “So beautiful” to Laura Mulleavy. Marisa Tomei held a similar sentiment, telling Kate Mulleavy, “It was amazing. It was wonderful.” Meanwhile, Jessie Ennis was one of several people snapping away on camera phones backstage of the model in the bright blue ballgown that capped the show.

It was that piece’s drama and glamour in particular that not only speaks to the collection’s aesthetic, but the influences of Hollywood for what defines couture on the West Coast, Kate Mulleavy said.

“Part of getting to do a show here is to think about the traditions that have happened in Los Angeles that have affected fashion,” Laura Mulleavy said. “My first love in fashion was probably costume design, so watching films and really loving Hitchcock films. It’s like the American version of contributing to the couture houses.”

California, and more specifically, the greater Los Angeles area has for some time lacked the collaborative clout for a fashion week that gets the same level of attention from even its own designers as other markets. Many of the more recent presentations here have served as full-blown productions.

About a year ago Opening Ceremony’s Carol Lim and Humberto Leon staged their spring 2018 fashion show in Mickey’s Toontown at Disneyland, creating an immersive, cartoonish, fantasyland for guests to traipse through. Made Los Angeles for its 2017 installation paired designs from Rochambeau, 424, Joyrich and Pleasures with performances from Snoop Dogg, Wiz Khalifa, Yung Jake and A$AP Ferg.

That the Mulleavys staged their fall presentation in a nontraditional setting and in California continues the conversation around what L.A. fashion could mature into, particularly as the city and its surrounding area sees more infusion of creatives from other parts of the country and world.

“Los Angeles has created some of the most iconic costumes in the history of film and it really has an amazing old-school couture factor for a lot of the designers that work in costume design,” Kate Mulleavy said. “In terms of ready-to-wear and fashion — talking about fashion weeks — I think the world’s just expanding and you can really do shows in the places that inspire you. There’s a freedom in that and people should follow that. It’s exciting to see things in different places.”