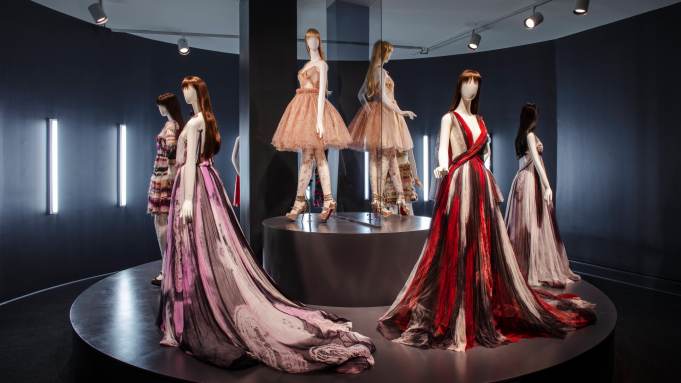 The National Museum of Women in the Arts in Washington, D.C., has never done a fashion exhibition. For its first, it chose to focus on two living American designers who have owned and operated their label independently from its inception. The exhibition, titled simply “Rodarte,” opens Nov. 10 and runs through Feb. 10, 2019, showcasing nearly 100 pieces from 18 collections by Kate and Laura Mulleavy, the sisters who started their California-based label 13 years ago.

This is not the first time a museum has come calling to feature the Mulleavys’ work — the Cooper Hewitt staged a show on Rodarte in 2010, as did the Museum of Contemporary Art, Los Angeles the following year — but the National Museum of Women in the Arts’ show is Rodarte’s biggest yet. Guest curator Jill D’Alessandro, who oversees costume and textile arts at the Fine Arts Museums of San Francisco, worked with the Mulleavys to break down their collections into recurring themes: Early Innovations, Magical Beautiful Horror, Woodshock, Black Swan, Texture, Northern California Roadmap, Light and The Garden. The pieces are displayed in full, original runway looks with hair by Odile Gilbert and an installation by Rafael de Cardenas/Architecture at Large.

In many ways, a museum feels like the ideal place to view the Mulleavys’ work. The displays allow for up-close viewing of the intense handwork that went into the clothes and contextualizes them in a way that the runway hasn’t, which crystallizes in the floral-themed Garden gallery in which three dresses from their first and second runway shows, fall 2006 and spring 2007, are shown with 13 other looks all from spring 2017 and 2018. The connection is clear. Then there’s the fact that none of the pieces on view were designed as casual everyday wear, a point that seemed to escape at least one attendee at a press preview on Wednesday. “I’m not familiar with Rodarte, and I don’t think it’s for me,” she said, before asking another guest, “What about you? Do you have a closet full of Rodarte?”

D’Alessandro said the NMWA chose Rodarte for its first foray into fashion because it considers the Mulleavys cutting-edge, and their collections have touched on themes suitable for an artsy audience. “When they’re introducing fashion, they were really interested in designers that deal with the same subject matter their audience is used to seeing in art,” D’Alessandro said. To that end, there are five dresses from the spring 2012 collection inspired by Vincent van Gogh’s “The Starry Night” and sunflower paintings, as well as the Hubble telescope.

The Mulleavys have been asked if they consider their fashion art before and it makes them bristle just a little. “This is a question that people have asked us for a really long time and I don’t think we ever come to a landing on it,” said Laura. “ I can only define what I am fulfilled by in fashion. Fashion for me is self-expression and about creating narrative. I think it’s a very artistic process. I think the people that make incredible fashion are artists. I don’t confuse the idea of saying ‘fashion is art’ as the same thing as you think you’re a painter and you’re making fine art, and you go to an auction and it’s going to be included with Van Goghs and Picassos.”

Asking if fashion is art seems to imply that it isn’t. “Why is design, particularly fashion design, talked about as the lesser of the design worlds,” said Laura. “That’s because it’s feminized and put into the female space, even though there aren’t that many women who have risen to the top of our industry and are idolized. It’s such a confusing dialogue because I don’t think people question product design and interior design as much. I think it’s interesting that it comes up in fashion.”

Whether fashion is or isn’t art, in this case, it’s being presented as an exhibition, so what did the designers want to convey and what do they want viewers to take away?

“It’s very important where it is, which is at the National Museum of Women in the Arts,” said Laura. “Women in the arts is a very important subject. It’s a marginalized space…it’s the same in fashion so hopefully that can translate and we can have that discussion within our industry. And it’s exciting for people to see the work up close.”

It’s impossible to pick up the details whizzing by on the runway or two dimensionally in a photograph. The Magical Beautiful Horror gallery is made up entirely of pieces from the fall 2008 collection, wispy dresses in swirled hand-dyed tulle and webby knits that are remarkably constructed. Kate pointed out that if you look closely, the prints from the Van Gogh-inspired pieces mix digital images of outer space with Van Gogh paintings. The layout also traces the evolution and through lines in their work. After Natalie Portman wore a dress from the fall 2008 collection, she recommended the Mulleavys to Darren Aronofsky, who directed “Black Swan,” for which Rodarte did the ballet costumes. It was around the same time they were designing the beautifully tattered black dresses from the spring 2010 California Condor collection. “It’s interesting to see what our interests already were and how we funneled that into projects,” said Kate. There are exceptions. The fall 2014 dresses bearing prints from “Star Wars” are filed under Light along with the Van Goghs, but they still feel out of left field.

The exhibition doesn’t include the Mulleavys’ very first designs or their latest collection, spring 2019, but it covers just about everything in between. It’s essentially their full body of work, though they don’t feel they’ve been around long enough to call it a retrospective. Not all of the collections garnered critical praise and the brand has never scaled commercially, but looking at it all together, there is an identity. “As human beings, we just want people to like us and unfortunately that’s not always the case when you’re making things,” said Kate. “The other side to that is that no matter what the response is, you have to figure out what drives you…I’m the most interested in design when I’m following who I am.”