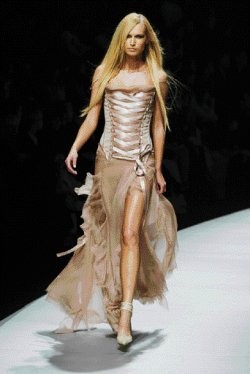 Versace: Was Donatella Versace cost-cutting at the couture? If so, she sure saved a bundle. Because the two-part ready-to-wear extravaganza (Versace and Versus) she staged on Tuesday was anything but a low-budget affair. As if to set the record straight in dramatic fashion, Versace rented a vast television studio on the way to Linate Airport, installed a huge elliptical runway and invited 1,000 or so people to watch her girls strut their stuff and then party hearty afterward. And oh, yes, Versace confirmed her fall campaign girl — Christina Aguilera, who will be featured in the ads for the main line, to be shot by Steven Meisel next month in New York, and possibly some other ads for the house. The petite pop princess was also featured in Donatella’s front row, sending the paparazzi pack into its typical celebrity-induced tizzy when she took her seat in all her red micro, platinum blonde glory.

The platinum blondness, of course, didn’t stop there. While Donatella takes her work and her glamour very seriously, she knows that her personal style holds a certain amusement factor for mere mortals who marvel at her ability to be perpetually tressed, lip-glossed and rocked out with major diamonds. Inevitably over the years, elements of her beauty look have made it onto the runway, but never as overtly as on Tuesday night, when she delivered her “ode to me” as Amber and Karolina opened the show done up in stick-straight blonde yardage and pale, lacquered lips. They looked great, and so did most of the clothes — sexy and dramatic, you betcha, but also wearable, with a range from chic to flamboyant, always with that distinctive Versace sizzle.

Before her show, Versace stressed that troubled times would not clip her wings. “It’s extremely important to make people dream about something,” she said. “They want to want something.” She said she was going to offer them a rock ’n’ roll-Western-biker chick fantasy, and she pulled it off like a charm. She kept everything tight, and heavily detailed but not overdone. Round-the-clock tuxedos were inset with the kind of swirls that do up a rodeo champ’s shirt; dual-fabric pants pilfered from chaps but stayed skin-tight, audacious coats swung with miles of fringe. But some of Donatella’s best pieces were in fur, shirred, ribbed or dyed, perhaps in a massive dose of pastel lynx or the discretion of fluffy sleeves on a tough-chic jacket.

Donatella believes that even the most brazen biker babe likes to soften up for big evenings — at least if she’s Oscar-bound. And if she’s not, well, honey, find another runway. But if so, why not a corset? Versace’s offered more laces than a tony Belle Epoque brothel. The point here, as there, was seduction, and Donatella delivered.

At Versus, she did her part for the intergalactic-sexpot mood of the moment. Her space wanderers drew from disparate style icons; clearly, this girl idolizes both Barbarella and Joan Jett, but gets coiffed by a graduate of the Finger-in-Light-Socket School of Beauty. But she has a good time in tight, sexy, colorful clothes that would turn heads anywhere, including where some of these playful looks might feel most at home — on Mars.

Missoni: The house of Missoni has been in business for half a century, and the big 5-0 promises to be a happy affair. That’s because, with all those years and countless melange knits, the company has set the right course to the future, one likely populated by a vibrant, multigenerational clientele. Certainly, no one makes the case better than Angela Missoni’s beautiful daughter, Margherita, who sat front row, as did another emerging It Girl, Anna Van Ravenstein, who watched with her mom, Pat Cleveland, and brother, Noel, after getting the star treatment from the paparazzi.

They all settled in for a show that proved once again Angela Missoni’s confidence keeping the family legacy current. First, she kept shapes clean, clean, clean, the better to have her way with those patterns without losing control. What latter-day jet-setter wouldn’t want to run about in sexy-sturdy coat-and-mini ensemble, or go clubbing in geometric halter mini? Whether pants in bright yellow or raspberry velvet will have many takers is iffy, but on the runway they looked appealing enough with Missoni’s racy printed shirts. No such issue with the lineup of lively coats and jackets, from a knitted number with big poodle-knit sleeves to jaunty furs inset with specialty-of-the-house fabrics. And speaking of fur, dyed fox stoles added an offbeat kick.

For evening, printed silk minis and dresses in oversized metallic scallops played smartly to a new generation of party girls. The experience of 50 years and the sweet bloom of youth — what could be better?

Miu Miu: Into every adolescence, a little gender confusion must fall, and that goes for cool girls like Miuccia Prada’s Miu Miu muse, too. It’s like gym class, there’s just no getting around it. But instead of running from reality, for chez Miu Miu, that heightened state of duality is a cause for celebration. Why not treat the girl who is a little unsure to a rosy pink leather jacket and matching bag as well as a slouchy man’s coat and matching clunky oxfords?

Miuccia played Fifties-era propriety both ways, borrowing some pieces from Ward and others from June, then layering them together. Out came delicate chiffon slip dresses tied with a sliver of leather and powdery webbed knits, but also a ton of mixed and matched tweeds, boxy and full of man power with extra sets of woolly lapels worn peeking out from beneath cardigan and coat alike.

But no matter how fragile she is or isn’t, the Miu Miu girl will always be fashionable — and warm. Prada wrapped the shoulders of cardigans, leather jackets and her most butch black trench with lush fur. And what a way to soothe those growing pains. Of course, Prada’s double message also means there’s something at Miu Miu for everyone.