Rodeo Drive, which Andy Warhol described as “a giant butterscotch sundae,” is a symbol of Hollywood excess, but it’s also big business. 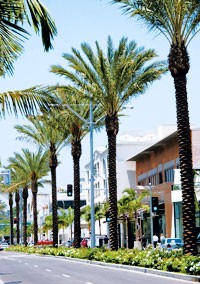 After an $18 million renovation that widened sidewalks, improved lighting and replaced aging ficus trees with leafy palms, Rodeo Drive is in the throes of a retailing blitz that includes newcomers such as Eres, Etro, Michael Kors and Roberto Cavalli. In addition, mainstays like Prada, Louis Vuitton and Dolce & Gabbana are spending millions of dollars on renovations and expansions.

Almost two-dozen stores on the three-block drive between Wilshire and Santa Monica Boulevards, a landscape of brightly painted boutiques and restaurants, glass facades and bougainvillea-covered trellises that complement celebrity sightings and tourists, are in the leasing or construction stages. The goal is to get them operating in time for the crucial holiday season.

“Luxury retailing is the one sector that never really got crushed and got quite strong during the economic downturn,” said Adrienne Tennant, a senior analyst at Wedbush Morgan Securities Inc., in Los Angeles. “We found that Hollywood and the media is fairly defensive in nature and can sustain these higher-name brands.”

“We’re looking at double-digit increases this year,” Cohen said. “You have a lot of pent-up demand, including the lower-end customer who’s buying luxury for aspirational and investment reasons.”

Increased activity in the luxury sector in L.A. is not unique to Rodeo Drive, ratcheting up competition. “It’s spreading out,” said Ron Herman, owner of Ron Herman Fred Segal Melrose. “But it’s really not a problem because we live in cars anyway. We’re a city of excess.”

But not every retailer finds gold on Rodeo Drive. Companies that have been subject to slower sales and other problems, including XOXO, Cerruti and Fred, have given up their storefronts.

“Rodeo Drive and Fifth Avenue are classic examples of putting up flagship showcases that may not necessarily generate revenue,” Cohen said. “For some manufacturers, that’s OK. It’s all part of image building. But if you’re paying big rent and going month after month of not making money after a while you say ‘this is not working.’”

Herbert Theodore Fink, owner of the 35-year-old Theodore boutique, one of the last independent holdouts here, said that Rodeo has lost its small-town ambiance, and that Beverly Drive, one block east, charges rents far lower than its better-known counterpart.

“These corporate stores are three-dimensional billboards,” Fink said. “They’re not neighborhood stores. They’re for the transients. We’re still busy because we’re in the business of making locals happy. They come into town to have their nails done or a shot of Botox and come in to gossip with the girls. It’s a hangout.”

Still, the value of having a Rodeo Drive outlet can’t always be measured in sales volume.

“Our Rodeo Drive boutique is of great importance to the company because it is our base in the world of Hollywood and its proximity to our loyal clientele in the entertainment world is necessary,’’ said Tod’s ceo Claudio Castiglioni. “Rodeo is not only an important piece of real estate for a luxury brand such as ours, but a retail outlet in which we have high performance expectations and results.”

Last September, Brooks Brothers opened what had been the largest store on the drive, a 22,000-square-foot space at 468 North Rodeo Drive that had been vacant for three years after Tommy Hilfiger closed.

Perhaps the most ambitious retailing plan is the Prada Los Angeles Epicenter at 343 North Rodeo Drive, a 24,000-square-foot, three-story building that was vacant for almost three and a half years. It will open to the public July 16. The estimated $14 million project designed by Rem Koolhaas and Ole Scheeren will have a hydraulic aluminum panel similar to a garage door that retracts during business hours, the company said. It will incorporate an air-curtain system that separates the inside temperature from the outside. The walls of the store will be lined with a sponge-like substance on which merchandise will be displayed.

Marco Pievani, general manager of Etro North America, chose Rodeo Drive for the Italian company’s third U.S. store after New York and Coral Gables, Fla. “We were ready as a company now,” he said, projecting more than $3 million in first-year sales. The store is to open this month, and Las Vegas and South Coast Plaza in Costa Mesa, Calif., are on Pievani’s radar next year.

Michael Kors in the fall is to debut his second U.S. shop on Rodeo Drive in a 3,500-square-foot space.

“When we opened on Madison Avenue, I said that I wanted it to feel like the chicest neighborhood dress shop in the world,’’ Kors said in a written statement. “We’ve had a huge success in New York, and I look forward to our opening in L.A….I love Beverly Hills, and am thrilled to have my second store on one of the most glamorous blocks in the world.”

Chuck Dembo, a partner at real estate firm Dembo & Associates who handles many Rodeo Drive deals, said business has increased even with annual rents of $275 to $300 a square foot, compared with rents of $216 to $240 about four years ago.

Dolce & Gabbana has doubled the size of its store at 314 North Rodeo Drive to 12,000 square feet. The space opened last month and is projected by analysts to bring in $14 million in sales its first year, or more than $1,200 a square foot.

The successful cultivation of local customers has prompted Louis Vuitton to gut its flagship after only five years, said Karen Watkins, vice president of stores in the western region. “Our locals have increased dramatically since 1999,” she said. The store will double in size to 13,000 square feet and will include a terrace with a glassed-in private shopping room. The shop is to open in September.

Rodeo Drive’s 123 retailers had $256 million in sales last year, or about one third of the estimated $1 billion in total sales for Beverly Hills, according to city records. The revenue is almost evenly split between tourists and resident customers.

Rodeo Drive also has more competition for the luxury shopper. Westfield Corp. announced a $127 million project to spruce up Westfield Shoppingtown Century City, Calif., with a second level and 30 new stores, including several luxury retailers. The project is to be completed by 2006. The mall, known as Century City, is less than a mile from Rodeo Drive.

Melrose Place is another hot spot. Already home to Tracy Feith and Henry Beguelin, the chic street is getting a Marc Jacobs compound with two stores and a press office as well as the city’s first Marni boutique. Representatives from London-based Paul Smith confirmed the company is honing in on a lease there for its first West Coast store.

“I normally shop on Rodeo Drive,” said L.A. resident Nancy Korek, who picked up a pair of pants and a coat at Stella McCartney on Beverly Boulevard. “I was here walking but, honestly, with a car, this is not out of the way.”

Rodeo Drive merchants are nonplussed. Thomas Blumenthal, president and ceo of Beverly Hills-based jewelry retailer Geary’s, opened his second store on Rodeo on Father’s Day. The 1,500-square-foot shop is one block from the 15,000-square-foot Geary’s flagship his family has operated on Beverly Drive for 74 years. He projects $5 million to $7 million in first-year sales.

“The tourists don’t get off of Rodeo Drive,” he said, noting he owes more than half of the store’s first-week sales to the Japanese tourists. “It’s that simple. Beverly Hills doesn’t have the exclusivity on luxury. It has just refined it.”