The first collection for the Italian brand by Roksanda Ilinčić bows for fall 2019.

A look by Roksanda for Marina Rinaldi

MILAN — “Everybody should have fun with fashion, no matter the size and age, there should be enjoyment and playfulness,” said Roksanda Ilinčić. The designer is spreading this message through a capsule collection for Marina Rinaldi, launching for fall 2019. This is the first of two capsules and follows the Italian brand’s association and collaborations with the likes of Fausto Puglisi, Ashley Graham, Joana Vasconcelos, Stella Jean, Tsumori Chisato, Amy Arbus and Claudia Losi.

“I am a woman designing for women, empowering in a feminine and delicate way, and Marina Rinaldi is doing exactly the same,” said Ilinčić, who will bring her fashion aesthetics to the brand. “Our approach is to make daily wear easier — and fun.”

“Our customers long to wear clothes that have a fashion approach,” explained Lynne Webber, managing director of Marina Rinaldi. “We have had a series of collaborators with different backgrounds, and Roksanda with her London background is also very stimulating. We want to put across the message that there are no barriers, no taboos and that everyone is free to express their personality and taste.”

Webber admitted that these collaborations help add more visibility to the brand, triggering “a lot of curiosity, to a world considered remote from fashion — this is a very important message.” Marina Rinaldi, part of the Max Mara group, aims to propose different role models in the industry and caters to curvy and plus-size figures.

Art was chiefly responsible for building the link between Marina Rinaldi and the designer. “It all magically happened, I was invited to a private view of Collezione Maramotti [the family owner of the Max Mara group], and it was such an inspiring moment — the family has always been a big supporter of modern art,” observed Ilinčić, who infuses her namesake collections with artistic references and sensibility. She added that she was impressed by the group’s know-how, having had the opportunity to view the factory building and observe the company’s artisans at work. “It was an incredibly inspirational trip and one thing led to another.”

To wit, the fall capsule was inspired by the late-20th-century minimalist artist Frank Stella and his dynamic and geometric colorful brush strokes. 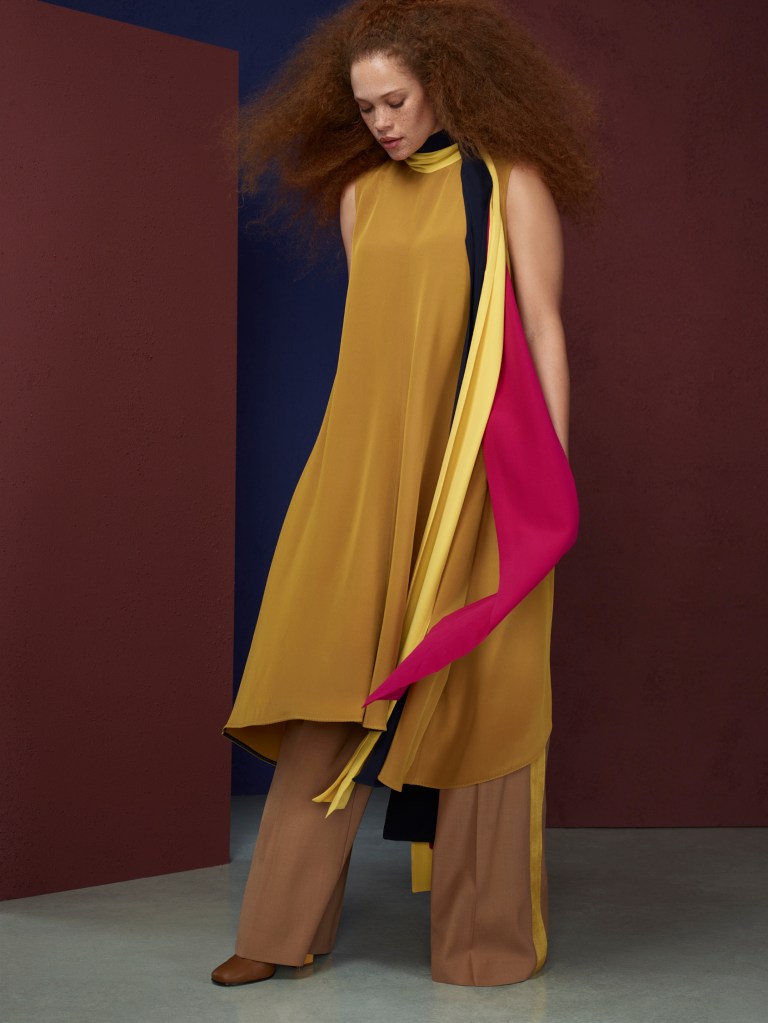 A look by Roksanda for Marina Rinaldi.  courtesy image

The fluid and willowy silhouettes are defined by intense shades of burgundy, ochre, pink red or black and there are soft, long flaps of fabrics that run from the neck to the hips, and silk is a key fabric, said the designer. There are cutout dresses and sculpted sleeves, as well as “fully fashioned” knitwear. The designer, who has a background in architecture, played with various textures and she created two pure, double-knit cashmere coats as a tribute to Max Mara’s storied expertise. She fully endorsed Marina Rinaldi’s take on “breaking away from certain looks society puts on us, all norms that are not good to anyone.” 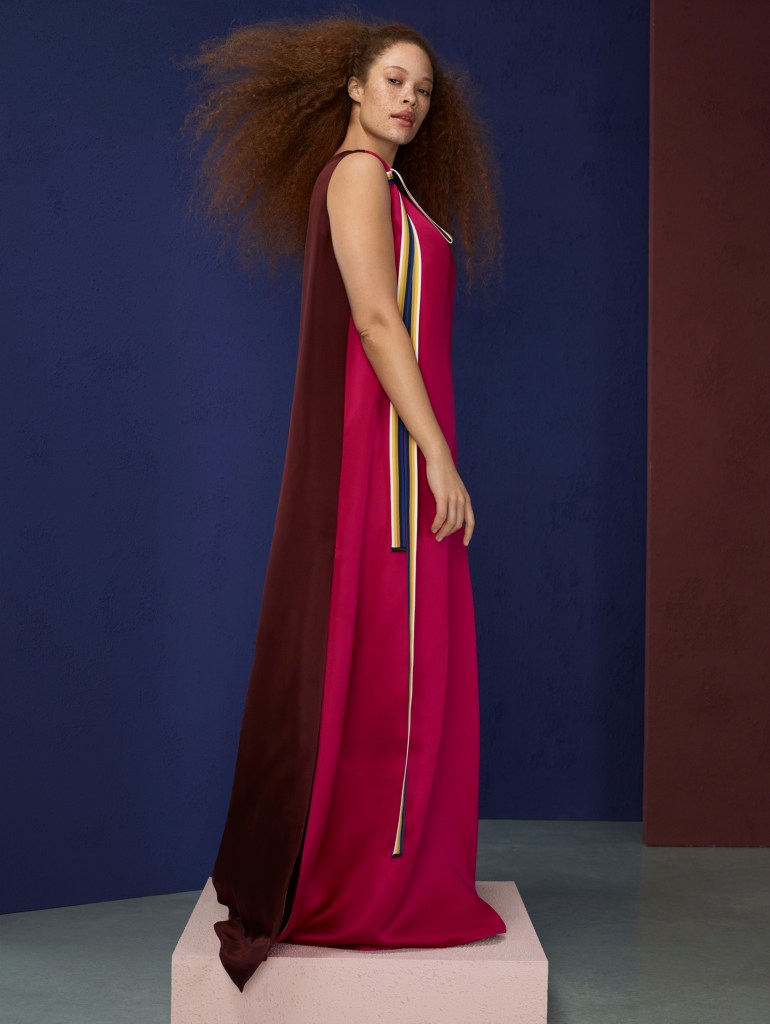 A look by Roksanda for Marina Rinaldi.  courtesy image

Webber said the company is planning a restyling of the Rome and Milan flagships with a new concept and that, as part of its development plans, in January it opened a banner at the Dubai Mall, entering the Middle East market. Marina Rinaldi has 250 stores globally. Sales in 2018 totaled 134 million euros, stable compared with the previous year, said the executive.