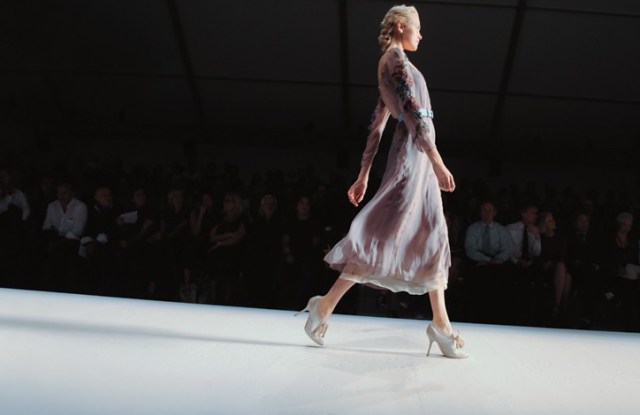 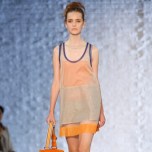 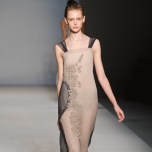 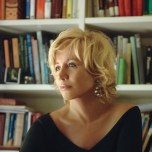 Upon entering Alberta Ferretti’s office in Milan, one’s attention is immediately riveted by rows and rows of metal-framed photos covering the walls. There are about 200 images of celebrities fabulously gussied up for red carpets over the years, showcasing the designer’s impressive Hollywood following, garnered slowly but surely, with neither fuss nor pomp.

There’s Scarlett Johansson waving in a teal tank dress; Diane Kruger swathed in an apricot feathered number; Drew Barrymore wrapped in blush pink lace; Reese Witherspoon in black; a supersleek Meryl Streep at this year’s Academy Awards in a taupe column with a twisted collar, and many more.

Whether blonde or brunette, tall or petite, established or on the verge, what these ladies share, at least in these snapshots, is a fashion sensibility that favors sensuality and elegant romanticism embodied by airy silks and discreet embellishments.

When that’s the case, there’s no going wrong with Alberta Ferretti, whose quieter approach serves women wary of overpowering wattage. Underscoring the point is her powerful spring collection—quintessential Ferretti, after a few seasons of trickier layerings and structure.

“This season I felt the urge to refocus on the Alberta Ferretti DNA, certainly recognizable in lightness and sensuality,” she says, her spunky blonde bob giving the designer an aura of both sophistication and youthfulness.

As spring’s ethereal evening gowns materialized on the runway, it was easy to imagine them swooshing down the red carpet against a backdrop of blinding camera lights.

Layered chiffons and organdies were adorned with Grecian drapes, soft bodices or pleatings. Some styles were embroidered with coral branches fanning across the skirt, while others featured three-dimensional tulle garlands. Whatever the decoration, Ferretti points out that it’s never “too brazen.”

“Especially in summer, I love a dress that moves, the sense of freedom it brings and the idea that a woman’s body will mold it,” she says. “It adds personality.”

Ferretti also worked an Edwardian angle with a dusty palette of blush pink, lilac, slate and lemongrass and a savvy mix of textures and weights. There were toffee pinafores over Fortuny-like pleated silk dresses or a gridlike apron with crocheted insets, layered over organza shirtdresses.

But as much as dreamy whiffs fill Ferretti’s work, her feet are firmly planted on the ground. In fact, she’s the first to note the need to be well versed on many fronts to stay ahead of the game. And lest anyone be deceived by fashion’s rarefied and mystical image, Ferretti reminds people that being a designer today is an arduous task: “We need to transmit poetry, romanticism, emotions, but we also need to talk business, know the economy, competition, the Internet, religions and so forth.”

Part of that burden is absorbed by her brother, Massimo Ferretti, chairman of Aeffe SpA, Alberta Ferretti’s parent company. Massimo lays out the business plans while she sketches and fits. “We share a real passion for fashion and our work, and it’s not for the money,” she says. The siblings are complementary, and they’ve honed a constructive relationship based on respect and trust. “I always show him the collections, and if anything, he’ll ask, ‘You’re not doing black? Are you sure?’ But he trusts me completely.”

Creatives, she adds, also face the challenge of new and evolving markets, not to mention savvier and more demanding women. “Fashion today speaks a universal language. If until recently there were two key markets—the U.S. and Europe—today, China, India, Russia, the Emirates, etcetera, all play an important role,” she says.

The publicly listed Aeffe released combined 2008 sales of 65.2 million euros, or about $97 million, for her signature collection and the Philosophy by Alberta Ferretti diffusion line, which launched in 1987 and is shown in New York. There are 57 stores between the two, plus 210 points of sales worldwide for Alberta Ferretti.

Ferretti herself lives and works in San Giovanni in Marignano, a small coastal town in the Emilia-Romagna region of Italy, where the brand is based. She lives on a hilltop, in a white-washed villa with sprawling grounds overlooking the sea.

Ferretti often sets sail on Prometej, a former Russian military icebreaker she completely refurbished and outfitted with raw linens, modern white sofas and carved, ethnic-looking furniture. At the Cannes and Venice Film Festivals, it’s transformed into a party boat, while in August, she uses it to glide across the Mediterranean.

At ease in her tranquil surroundings, Ferretti, who leads a low-profile life, scoffs at the stereotype that small-town life is less stimulating creatively.

“It’s all relative,” she quips. “Take me as an example—I love to travel and I’m constantly on planes between Milan, Paris, Rome and New York. Your brain acts as a computer, absorbing a ton of data that you then need to metabolize, and a quiet place is ideal.”

Self-described as “dynamic, energetic and whimsical,” Ferretti is the kind of person who will land in New York in the morning, work all day and then later kick off her heels to go jogging in Central Park. She also cherishes mental exercise, and often takes in art exhibitions. Recently, she hopped on a plane at five in the morning just to see a Francis Bacon show in Rome. Her art taste spans from Caravaggio to Vanessa Beecroft to Michelangelo Pistoletto. “Being locked in an office is useless because you don’t know where the world is headed,” she plainly states.

Given her friendship with actresses the caliber of Sandra Bullock, Marisa Tomei, Diane Kruger and Uma Thurman, the designer likes to attend as many events as her schedule allows. Ferretti recalls a story from many years ago, when she first met Thurman in New York. The actress was decked out in a cream Ferretti raw-edged skirt suit over a silk camisole. “I did something I wouldn’t normally do, which was to go up to her and say, ‘Hi, I’m Alberta Ferretti. You’re wearing my outfit,’” she chuckles.

A few weeks later, she received a letter from Thurman asking her to design a gown for the Oscars, which ended up being a red pleated number—romantic, of course.

“Romanticism is a great strength because it shows you’re able to declare your sentiments and emotions,” she says. “I’m very proud when people tell me I’m romantic.”