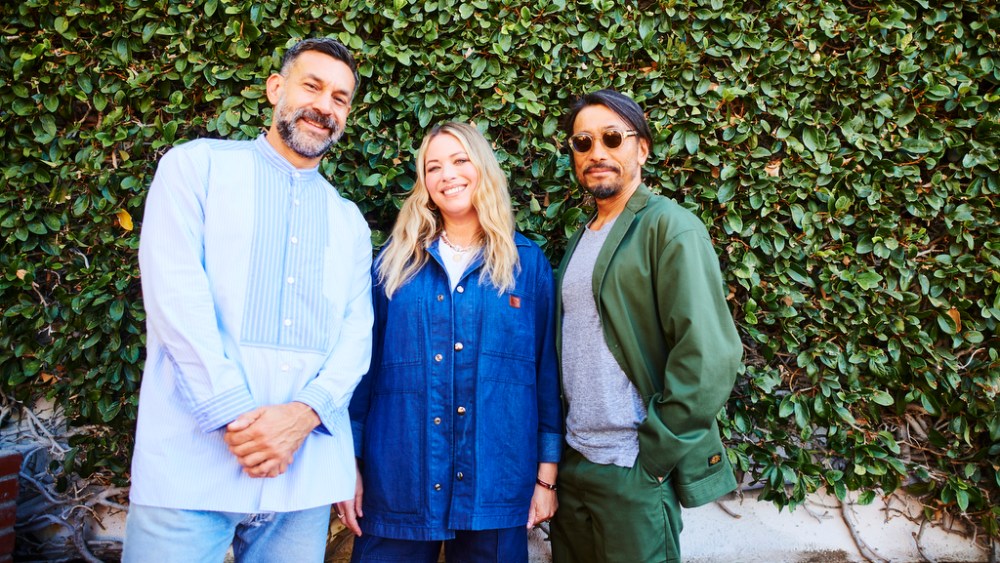 Speciality store retail is tough, but Ron Herman is 45 years young, as they say in Los Angeles, and the landmark store is revealing a few nips and tucks and an exclusive anniversary collection to celebrate.

Ron Herman opened his first store — all of 600 square feet — in 1976 at what was then known as the Fred Segal center at 8100 Melrose Avenue, the birthplace of boutique retail in L.A. Over the years, Herman’s space grew to 20,000 square feet, with other locations in Brentwood and Malibu.

The store has seen everyone from James Brown to Jennifer Aniston walk through its doors, shopping for board shorts alongside cutting-edge Japanese designers. It’s also the first place fashion people like Jenna Lyons and Mickey Drexler used to stop when they came to L.A. — to see what was new.

After selling his business for an undisclosed sum at the end of 2019, Herman stepped away entirely in 2020. Now the storied store is in a new chapter, under Japanese owners Sazaby League Ltd., which Herman first started licensing to 12 years ago. The conglomerate, which is also the Japanese distributor for Canada Goose, Wolford and many more brands, helped expand his presence in Japan to 27 stores, selling Japanese-only private label RHC and product like a Ron Herman Toyota FJ Cruiser vehicle.

“I’m not obligated to go to the stores; I have no landlord, employees or inventory. But I’m emotionally invested for the rest of my life,” Herman told WWD. “Fifty years I spent in those four walls….I will never be separated from the memories.”

When his children were not interested in taking over the business, Herman decided to sell to Sazaby because of his friendship with the person responsible for growing his business there, Koki Mine, whom he calls a son.

“Over the years, through the different evolutions of Ron Herman in Japan, I started to think of it like an oyster. Maybe I put the grain of sand in, but they grew the pearl and polished it…and we developed an adjacent brand and that’s really tricky.”

Since stepping aside, he’s gone to the L.A. flagship just three times. “The brand Ron Herman and the store has taken its first step into the future. I like the role of being a leader rather than follower. They are accomplishing that goal,” he said.

Annual revenues are between $100 million and $200 million, the majority coming from Japan and from the private label business.

In L.A., it’s no longer landlord Fred Segal, but Canadian real estate investor CormackHill that operates the 8100 Melrose cluster of retail buildings. CormackHill is owned by brothers Lyndon and Jamie Cormack, who founded the brand Herschel Supply, along with Brian Hill, founder and CEO of Aritzia.

After a protracted legal battle, the Fred Segal sign is now down. (No Fred Segal store has operated there for decades, and the intellectual property was sold in 2016 to another group, which opened up shop on Sunset Boulevard and other locations.)

The center’s other big tenant, Ron Robinson, has also moved out.

“Every time I come here, I feel connected to Hollywood from the 1970s to the present,” said Fujita, recalling how he bought his first Margiela jacket at Ron Herman and soaked in stories from salespeople about Joe Cocker drinking whiskey while shopping, and more.

In the age of stylists, celebrities aren’t out and about shopping as much as they once were, which was part of the  Fred Segal center’s allure. Many of the special labels that Ron Herman once had a lock on, Margiela for one, now have their own L.A. flagship stores, which when added to the rise of online shopping where anything can be discovered with the swipe of a finger, has made competition stiff.

The California dream that Ron Herman and others were selling almost exclusively from the 1990s to early Aughts has also now gone mainstream, with denim, hoodies and sneakers reigning supreme, even on high fashion runways.

So over the past year-and-a-half, Ron Herman has been going through a rebrand, spearheaded in part by consultant (and Outerknown cofounder) John Moore.

Walking in, the store seems lighter, brighter and less cluttered. It also seems more elevated than it had been over the last decade, when T-shirts, novelty sweaters, denim and sunglasses were the bread and butter.

A shoe department is new, now that the competing Fred Segal Feet store has gone out. And the buyers have kept a robust department of vintage, curated by Mothfood dealer Tommy Dorr.

“Ron Herman was our very first retail partner and integral to our global success,” said Audrey McLoghlin, founder of the L.A. Frank & Eileen clothing company, of wanting to be involved in the anniversary.

“Being a Los Angeles native, Ron Herman was always my favorite place to shop growing up. It’s such an institution here, true California style but always progressive and chic,” added Weird Bits jewelry designer Kimberly Senzaki, who created a pearl necklace for the anniversary.

In the men’s department, buyer Leal has recreated the denim bar that Herman first debuted when he started in the business as a merchandiser with Fred Segal.

Designer brands featured include everyone from Officine General, Isabel Marant and Dries Van Noten to up-and-comers like Stan out of Encinitas, Calif., maker of jackets from antique quilts, and other updates on American classics by Teddy VonRanson.

“We’re always working on finding new brands,” Leal said, adding that he’d also like to make space for more Japanese labels, fostering the kind of cross-cultural fashion exchange between L.A. and Japan that has been going on since the 1980s, and which helped the Ron Herman brand thrive there.

Indeed, Fujita began his career in fashion as a vintage dealer in L.A. “We brought U.S. culture and fashion back to Japan and vice versa,” he said. Even then, Ron Herman was his favorite store. “Great music, nice looking stylists, the newest fashion from Dries, Margiela — and vintage, this was my dreamland.”

Later, he met Mine, the Japan-based president of Ron Herman, who tapped him to be the liaison with the U.S.

Now that he’s in charge of the entire U.S. business, Fujita would like to open more stores, and grow the RHLA private label of denim, knitwear and wovens produced in L.A. and in Japan by Sazaby for the U.S. market.

“Now it is 10 percent of revenues, but we’d like to increase it to 20 or 30 percent,” he said, noting that Sazaby has been a good steward, offering financial and production support but also trust. “They don’t restrict what we try to do,” he said.

“It’s about getting the brand name out there and creating buzz,” said Lasser, who was a Ron Herman salesperson early in her career before launching into styling, and coming full circle back to become the women’s buying director last year. “I still believe in the magic,” she said.

Leal adds that improving the website is also a priority. “A lot of awareness comes from that. If we can get them to the website, we can drive them into the doors.”

And into the retail theater Ron Herman has been famous for since its former buyer John Eshaya was defining L.A. style by discovering Juicy Couture, BCBG and Earl Jean, among other brands. “We’d like to connect and be part of the community here,” added Fujita.

“Every time I’d come to L.A. — I worked at the Gap in San Francisco for years — this was the first place we’d stop,” Leal said. “A lot of ideas we’d take back and use for work. What Nina was doing with FreeCity, how the denim was laid out downstairs and how impactful it was, there was so much that inspired me. When I moved to L.A., I came in every few months to see what was going on. The environment is what always drew me.

“Everyone in this city knows this corner, whether they are confused or not, they know the place and probably have shopped here at least once,” he said. “That’s really powerful.”