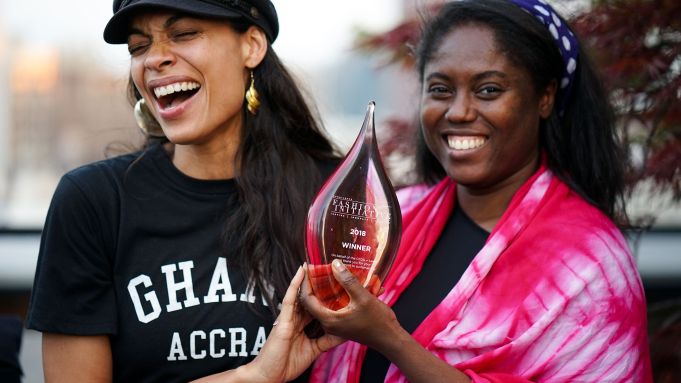 The second edition of the CFDA + Lexus Fashion Initiative came to a close last night at a cocktail reception to name the winner of the nine-month program designed to help fashion labels implement sustainable practices in their businesses. When the five participating brands embarked on the program in October, the idea was that they were competing for a single $80,000 cash prize, but CFDA chief executive officer Steven Kolb and Lexus’ Rachel Espersen revealed last night that there was a change: They added a runner-up prize of $10,000.

The top honors went to Studio 189, which was founded by childhood friends, actress Rosario Dawson and Abrima Erwiah in 2013. The collection is based in Ghana and New York and focuses on supporting and developing artisanal design communities in Africa. “We started with the idea of supporting the value chain and the idea of creating links between marginalized communities and market access through job creation and education for women,” said Erwiah, noting that their “blueprint,” as the proposals for the CFDA/Lexus program are called, was focused on mapping out the circular economy for the next 100 years and empowering the supply chain through innovation. Specifically, she mentioned the use of blockchain technology for transparency’s sake. “We already use organic cotton,” Erwiah said. “If you’re buying something from us how cool would it be if you could trace the entire process? We can do it, we can tell you about it, but what if we brought you on the journey with us?”

Nicole Heim and Chelsea Healy of Cienne, their sustainable women’s ready-to-wear collection, focused on fabric development and circularity of materials. Heim noted that Cienne was founded on a sustainability ethos, but as a small company, the CFDA/Lexus Initiative allowed them to develop practices they would otherwise be unable to afford. In January, each of the five brands participating in the program, which included Whit, M. Patmos and St. Roche in addition to Cienne and Studio 189, pitched a proposal for $20,000 in grant funding to further their sustainability efforts. “Then, today, we pitched the progress we made from that grant funding,” Heim said. “As a small brand, sustainability is more expensive [than traditional] processes, and the grant allowed us to have a little more working capital to actually put toward things we otherwise wouldn’t be able to.”

Asked what the judges were looking for in a winner, Espersen said, “One of the key things was to implement changes in their business but also something we could see implemented throughout the industry. The thoughts on disrupting the supply chain was why we wanted to award Studio 189.”

The second edition of the CFDA + Lexus Fashion Initiative was different from the first. The 2.0 version of the program was shortened from 17 months to nine months and the number of participants was halved from 10 to five. Kolb noted that this allowed for more focus, allowed for one-on-one mentorship and more experiences, including traveling to the Copenhagen Fashion Summit. The CFDA/Lexus program tends to draw small brands that were founded with sustainability in mind or are nimble enough to be able to pivot their practices. In terms of the larger players waking up to sustainability practices, Kolb said he’s encouraged. “What we’re starting to see are brands, like $100 million and up, who clearly did something very successful, and that success could just continue along — they don’t need to change it,” Kolb said. “But they’re coming to us and saying, ‘What do we do? How do we do it?’ We’ve been able to help a few brands privately. They’re not going to come to this program but they’re expressing interest.”