Diesel chief Renzo Rosso has reached out to yet another young designer, adding the Sophia Kokosalaki brand to his group, Only the Brave Srl. 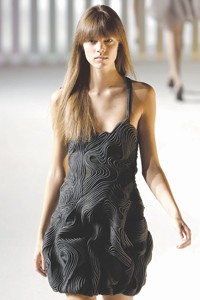 MILAN — Diesel chief Renzo Rosso has reached out to yet another young designer, adding the Sophia Kokosalaki brand to his group, Only the Brave Srl.

The acquisition of the London brand was made through Staff International, the manufacturing arm of Only the Brave, which also controls Diesel, Maison Martin Margiela and Dean and Dan Caten’s Dsquared.

The first Kokosalaki collection produced by Staff will bow for fall in Paris.

The Greek-born Kokosalaki, a graduate of Central Saint Martins in London, launched her namesake line in 1999 and is known for her romantic collections inspired by her Hellenic background, her intricate pleating techniques and sophisticated draped dresses. Last year, she was named creative director of the couture maison Madeleine Vionnet, which is being relaunched under new owners.

“Her take on fashion is new, fresh and modern, and the way she designs a dress is just incredible,” said Rosso in an interview. “I have never seen so much creativity in each single outfit. I am in love with her designs.”

The entrepreneur said he bought a majority stake in the brand, but declined to provide a specific percentage or reveal what he paid. But he did say Kokosalaki’s business has annual sales of about 500,000 euros, or $650,000 at current exchange. “It was not a big financial investment, but it will be further down the road,” said Rosso, citing retailing as one way to expand the visibility of the brand.

Rosso said he wanted Kokosalaki to become a “modern player in the world of contemporary fashion and a new luxury model.”

While praising Staff International’s “unique support system” and its “great hands-on organization,” Kokosalaki said she was attracted by the structure of the company, which she defined as “not too corporate,” and by Rosso’s respectful relationship with designers.

“I like to deal with people, not suits,” said Kokosalaki, who in the past has done a capsule collection for the Italian leather goods firm Ruffo Research.

“I’ve followed Renzo’s work for years, and I admire how he creates a very positive environment — for example, how he handles Margiela for what he is, encouraging him and not changing him,” she said, referring to the notoriously press-shy designer. “I’m more than confident that, with Staff’s support and expertise, I will get the perfect balance between growth and independent creativity.”

The designer added that she counted on the group’s “huge network” to expand the brand, attract new customers and provide prompt deliveries, but said there were no plans “to flood the market” with her products. “We are going to take our time and work hard to establish the brand,” she said.

The designer said she would continue to work for the Vionnet label. “This is not an issue with Renzo,” she said.

Rosso said he wanted Kokosalaki to be entirely involved with her collection. “I want a real partner who feels like a partner, responsible for the brand,” said Rosso, adding Staff will provide know-how, investments in technology and retail to grow the label, which does not have any of its own freestanding stores. Rosso said he also planned to develop Kokosalaki’s eveningwear division.

“I believe that part of my mission is the search for young, promising talents outside of the ordinary. I have never made any acquisition only to increase the profit of the group, but exclusively because I am passionate about the art and sensibility of certain designers,” said Rosso.

Kokosalaki’s collection previously was produced by Pier SpA, which Staff International acquired in October, but Rosso said this was “a coincidence.” “I had been keeping an eye on Sophia for the past two years.”