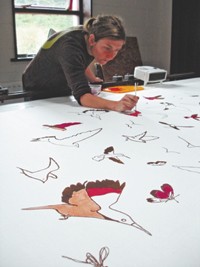 Lou Lou & Law is a 12-piece collection of jersey tops, silk skirts and cashmere knits, all printed with Law’s illustrations. The line, which will go on sale in the U.K. in June, will make its U.S. debut for spring 2007. It is the result of a long-planned collaboration between the two friends.

Law and Roswald designed the collection while holed up at Roswald’s house in the west of Ireland. The prints take inspiration both from the duo’s countryside surroundings and Law’s drawings, which are often of glamorous women in a state of undress. Prints range from nature-inspired sparrows and swallows to a naked woman’s silhouette in a repeat pattern. The detail of the naked woman can be seen only up close. Other prints are more simple, such as geometric knots in repeat on a jersey top.

Although Law has done illustrations for Harper’s Bazaar, the Sunday Times of London and the fashion label FrostFrench, actually designing a collection presented fresh challenges.

“This was completely different [from painting],” said Law, who is actor Jude Law’s sister. “First, there was a range of shapes to choose; then we had to decide how the designs would work with each one. I don’t know how designers do it season after season.”

The line will be introduced in the U.S. in August. Retail prices will range from $85 for a printed cotton tank to $442 for a cashmere silk cardigan.

As these are lower price points than those of Roswald’s main line, which is sold at Barneys New York in Manhattan and Beverly Hills, the designer hopes the collection with Law, which has a younger feel, will introduce her name to a new audience.

“The whole fun of it is that it’s not meant to be like my existing line,” said Roswald, whose own collection is packed with bold, colorful prints and proper, ladylike silhouettes. “This is more about a casual look that can be worn with jeans. It’s going to attract a very different customer.”

Law is also looking forward to the fresh exposure for her work. “It’s very different from a painting being sold — then, the image is taken away from the public gaze and into someone’s home,” said Law. “This way, the work gets to travel.”