The performance-artlike RCA graduate show was the London college's first under Zowie Broach, its new head of fashion. 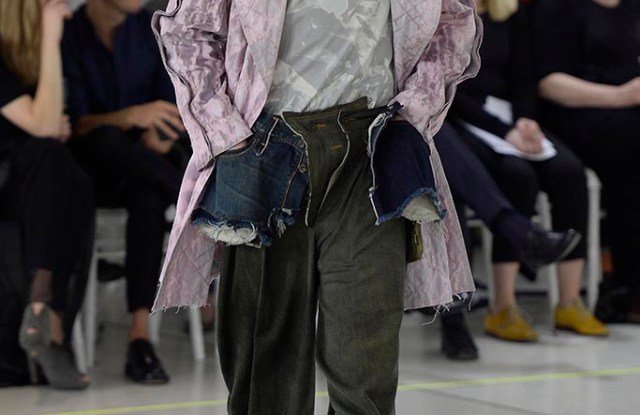 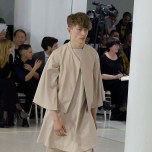 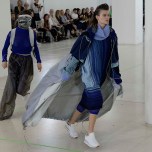 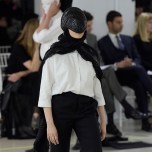 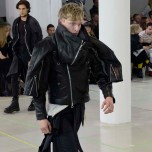 On Wednesday night, the Royal College of Art staged its first Masters runway show under the direction of its new head of fashion, Zowie Broach, who founded the experimental Boudicca label in the late Nineties.

And Broach’s influence certainly came through in the show, which had the air of a performance art piece, as models ran, skipped or stomped out into a white space en masse, creating a tableau of each designer’s collection.

The inventive production gave a strong impression of the students’ collections. Among the trends that emerged were looks that evoked urban armor, particularly among the men’s wear designers. They included Jae Hyuk Lim’s huge, down jackets in super-hero-esque silhouettes and Angela Syrett Roper’s fatigue jackets and shredded jeans, done in murky shades of acid-washed denim.

Click Here for Full Coverage of the Fashion Class of 2015 >>

Other designers, meanwhile, picked up on the trend of blurring gender lines in men’s wear, as in Mark Glasgow’s kitschy, Seventies-inspired collection in a feminine color palette — for example, a floral shrug in a gold, pink and yellow abstract pattern over a denim jacket, paired with pale pink cropped pants. Also in that vein were Chow Ka Wa Key’s voluminous opera coats woven in a shiny plastic-like yarn in shades of white and ice-cream pastels.

There was also plenty of cocooning knitwear, as in Min-Hsuan Weng’s ribbed knit tube dresses, designed with scarf-like strips of material that trailed on the floor. And Lucinda Popp presented knits that played with proportion, such as a jumpsuit in shades of gray and green that tied like a blanket at the bust line, while Sarah Isabella Sweeney sent out dramatic, oversize knits in ombré shades of green, pink and lilac with frayed edges and crystal embellishments.

Other designers took an opulent, magpie-like approach. A standout was women’s wear designer Sophie West’s collection, which highlighted shift dresses in a stiff, crushed velvet embellished with Perspex leaves and gems. And fellow women’s wear designer Morwenna Darwell wrapped her models in swathes of fishnet, embroidered with patches of fur or sequins, to give the effect of an abstract leopard print.

You're missing something!
SUBSCRIBE NOW
Royal College of Art