It’s been 14 years since Wes Anderson’s highly stylized cult film The Royal Tenenbaums hit screens, but the cast’s Seventies-meets-boarding-school wardrobe, conceived by costume designer Karen Patch, continues to resonate—a quick glimpse around a Halloween party any given year confirms that.

And yet nowhere was the Tenenbaums revival more apparent than on the fall runways, where Margot Mania was in full effect. City to city, the character famously brought to life by Gwyneth Paltrow emerged as the unofficial muse of the season.

For those in need of a refresher, Margot Tenenbaum—the ever-complex playwright and adopted daughter—was known for her signature look: a mix of edgy bad girl and bourgeois literary snob. The kohl-rimmed eyes, blunt blonde bob parted slightly to the side with a barrette, and a cigarette dangling from her mouth in perpetuity (film fanatics will recall that the character started smoking at age 12) have become unmistakably Margot.

Her attitude? A mélange of precocious intelligence and sophistication, surliness, secrecy, sexual promiscuity and apathy. For example, when asked why she never got her finger reattached—it was partially severed during a childhood wood-chopping accident, and she wore a wooden prosthetic—Margot coolly replied, “It wasn’t worth it.”

Designers across New York, Paris and Milan seemed to be feeling the Tenenbaums nostalgia in unison. Veronica Etro told WWD she referenced Anderson’s aesthetic for fall, as evidenced in her oversize, patterned furs and the eclectic tapestry motifs throughout the collection. A bohemian, librarian-chic vibe also pulsed through Alessandro Michele’s romantic debut collection for Gucci, which featured a mink coat that appeared to be straight out of Margot’s closet. Elsewhere, at Lacoste, Felipe Oliveira Baptista took the Tenenbaums trend a sportier step further, with some looks accessorized with athletic headbands, while Pablo Coppola channeled Margot with a weasel-fur coat at Bally. And even the fall looks from contemporary lines See by Chloé and Derek Lam 10 Crosby seemed fit for modern-day Margots, with their earthy, Seventies palettes and oversize outerwear.

With the Seventies revival on the runways still in full swing, why not add a dose of that distinctly Tenenbaums quirk? As Margot said in the film: “I couldn’t begin to even think about knowing how to answer that question.” 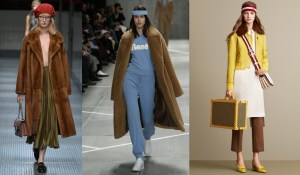