Ralph Rucci was positively buoyant at Thursday's opening of the retrospective "Ralph Rucci: The Art of Weightlessness," at the Museum at the Fashion Institute of Technology here. 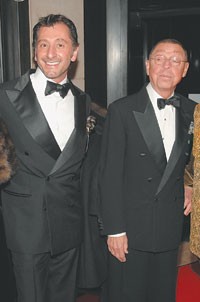 NEW YORK — Seeing highlights from a quarter-century’s worth of work might leave some feeling leaden, but Ralph Rucci was positively buoyant at Thursday’s opening of the retrospective “Ralph Rucci: The Art of Weightlessness,” at the Museum at the Fashion Institute of Technology here.

“I can leave here tonight knowing this is part of the past and I will be able to move on to the future,” he said of the recap of 25 years of his career.

Guests who passed by the 100 garments in the downstairs gallery might argue the designer has long had his eyes fixed on what lies ahead. One of the highlights was a hooded amethyst-colored satin evening gown, futuristic-looking circular gloves and four silk organza gowns depicting the four seasons. James Galanos, Martha Stewart, Amy Fine Collins, Linda Fargo, Robert Burke and Joan Kaner were among the well-wishers. Some of the female attendees, like Valerie Steele, the museum’s director, turned up in one of Rucci’s floor-length creations, Steele in a malachite-green gown.

While the exhibition was being set up, even the museum’s art handlers couldn’t stop commenting about the beauty of the clothes, Steele said. A few of the intricately designed gowns are suspended from the ceiling and look as though they are floating.

While Rucci is known to be a fan of Cristobal Balenciaga, Alix Gres and Halston, he had his own legendary designer/admirer present, thanks to Galanos.

“Ralph’s one-of-a-kind. He’s gone beyond being a designer. I feel as though he is an artist. His quality and detail are really quite unbelievable,” Galanos said. “In today’s kind of ready-to-wear — Ralph does ready-to-wear and couture — I don’t think anyone designs the intricacies he does. It’s mind-boggling.”