Company executives have conceived a new format — a virtual runway show with a “make-your-own” option that allows customers to put together and buy looks. 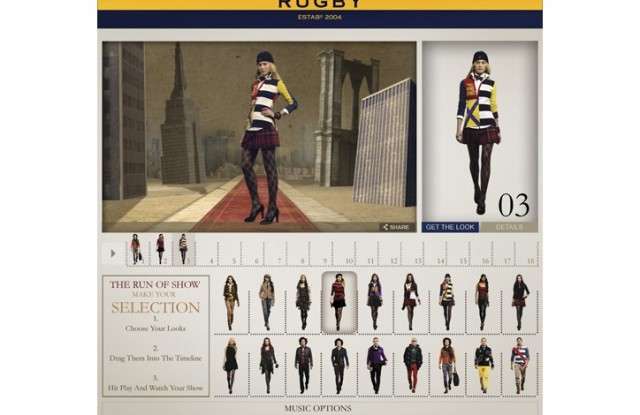 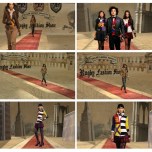 NEW YORK — Much has been said about the fashion show system and its flaws in recent months, and now Polo Ralph Lauren Corp. is making an online move that could one day create new alternatives.

When the company presents its first-ever show for the Rugby Ralph Lauren brand today, it will launch a new format — a virtual runway show with a “make-your-own” option that allows viewers to put together their favorite looks; see them in motion on actual models sashaying through a sophisticated, virtual, Rugby brand-inspired environment, and buy them.

Polo plans to extend the technology to its Lauren by Ralph Lauren and Ralph Lauren children’s wear brands next year.

“We have been doing fashion shows for years, and Ralph Lauren is always challenging us to rethink [the concept] and make it interesting,” said David Lauren, Polo’s senior vice president of advertising, marketing and corporate communications. “One of the challenges that we have had as we have grown different businesses is showing the product line in its entirety, especially as we are a global company. With the economy, people are not flying in for fashion shows, and while the significance of fashion shows as a sales tool has grown, the cost to editors and customers to see them has become more complicated.”

The virtual event, which launches at rugby.com, allows consumers to create their own runway show from a run-of-show list, pick their own soundtrack from a list of tunes by the likes of the White Lies and Amanda Blank, and forward the show to others as a wish list of sorts.

The new development addresses a myriad of issues Polo executives have been pondering, along with many others in the industry. These include the fashion system that hypes clothes months before they make it to stores; the cost of producing runway shows at a time when nearly every company is looking to cut unnecessary expenses, and technological innovations that allow brands to reach millions around the world with a brand message they control.

Lauren explained the firm’s online traffic typically peaks when it posts the Collection shows on ralphlauren.com each season. “We can have 3 or 4 million visitors come and see a fashion show in the course of two or three days,” he said. “The problem is that the fashion shows as we know them are not necessarily lined up with the ultimate time to sell the product. What is happening now is that people show fashion shows, and the product is not even available. It’s missed opportunities. How do you become more efficient and effective at marrying the fashion show with the sales opportunity?”

Lauren cited the recent debate about the merits and challenges of the current fashion cycle to the business of fashion. Technology, he said, may be able to offer some solutions.

“What is starting to happen now is that the Internet has really transformed the cadence of the music industry, the movie industry, and the television industry,” Lauren said. “Right now, you can TiVo a show, and you don’t really care what time it’s on. The traditional schedules as we know them have been blown away, and technology is the cause, and making sure that you can get ahead of the technology and use the technology to your benefit is the challenge for every company. We are seeing the value of the fashion show, so we want to get one step ahead. We want to introduce a fashion show during the holiday season so that you can buy now, and we want to do it in a way that is appropriate to the Internet.”

In fashion, Polo has pioneered several technological developments, from 24-hour interactive store windows to incorporating QR technology for mobile commerce, and it was one of the first brands to have its own iPhone application. Polo also recently introduced a Rugby Make Your Own iPhone App.

Lauren said the company considers the new virtual runway show as something “game-changing” for the industry.

“It’s something that Ralph Lauren really believes in — enough to say, ‘I want to do this for a plethora of our brands,’ and really want it to change the way we think about fashion shows,” Lauren said. “Right now there is a lot of discussion. People are cutting their budgets, and are spending a million dollars a show. You can produce this for very little, and you can do this with no audience and no invitations, and you can reach a million times the amount of people.”

The company will post an ad on YouTube today that could reach 40 million households — a far cry from the 300 to 400 guests who typically get to see the Ralph Lauren Collection show.

“We don’t know if we’ll ever do this [for Collection], but if this starts to work, and if the industry starts to change….It’s just like everybody says: ‘Are you going to read a book online?’ or ‘Are you going to listen to your music on your iPhone?’”

Asked how the concept takes the long-lead requirements of editors and retailers into consideration, Lauren said, “You can create a show and [present] it at different periods,” he said.

“This is not just about a cute little technology, or a cool bell and whistle,” Lauren added. “This is a statement to the industry about the power of the Internet. This is a changing of the cadence and keeping up with what is happening in the industry and trying to get ahead of it.”