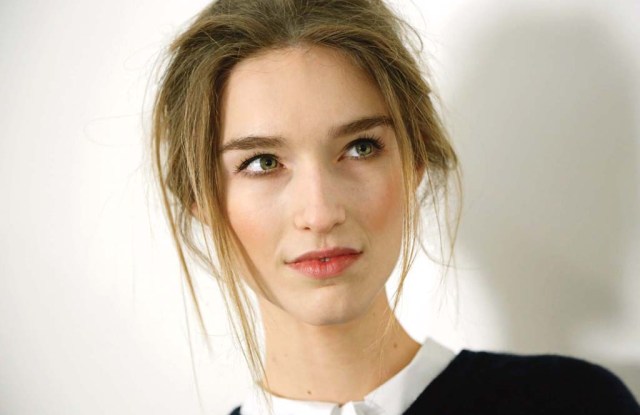 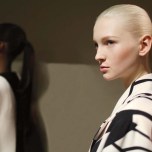 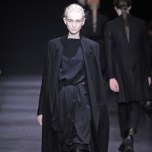 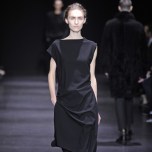 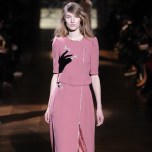 When did you find out that you had walked the most shows?

Manuela Frey: I never counted the shows. At the end, I was really sad that it was over and my agency told me, “You are the girl who walked the most shows, with Nastya.” And she is my friend. We always saw each other during shows, but never talked about how we were doing a lot of shows.

Nastya Sten: I found out a few days after the craziness ended. I was sincerely surprised. During the fashion week, time totally flies, so it’s hard to keep track of even your own shows.

Is there any competition between you two?

M.F.: No, not at all. None at all. And she’s in the same agency, so we’re proud to be in The Society. It’s so cool because I really like her. She’s a good friend. She’s really open and nice and honest. She’s not a girl who thinks she’s the best—she’s really humble. She’s so beautiful. Her eyes are crystal blue.

N.S.: I never felt any competition with Manuela—we never miss a chance to chat or take some pictures together backstage. I love her attitude towards her work—she’s always very upbeat no matter how tired she is. And, she has an amazing walk.

What was your most stressful moment?

M.F.: My phone was stolen backstage at Alexis Mabille, in Paris. It was horrible because everyone from the agency was calling me, “Where are you?” But I didn’t have my phone. My friend Josephine Le Tutour helped me and I called them, but it was really hard. Luckily, I knew my schedule, but it was difficult.

N.S.: This season, overall, wasn’t as hard as last time for me. But working in London was pretty stressful. It’s a shorter trip than the rest of the cities, so I was in a constant rush, which meant less rest. I even caught a cold.

What was your favorite show of the season?

M.F.: It was my first time doing Prada, and I was so excited. I’ve heard it’s really difficult to get the show when you are not a new face, because they always take a lot of new faces. I waited 12 hours on a chair backstage until I was confirmed. They confirmed me one hour before the show, and I was so, so happy. I really flew over the catwalk.

N.S.: I loved Saint Laurent for the collection and the show’s attitude, Valentino’s breathtaking dresses, Chanel’s unique runway….The list goes on and on. I found the Alexander McQueen show to be the most complete. All the elements together made it very fascinating both to participate and to watch later.

What do you do backstage to pass the time?

M.F.: I read romance books, and sometimes I draw. I just take a pen and paper, but I’m not a professional.

N.S.: Free time is a total luxury to have during fashion weeks. I spend some time to catch up with my family and FaceTime. [I will] skim through the latest news to not fall back on what is happening in the world….

Did you have any great celebrity sightings?

M.F.: Backstage, I was always really late because of other shows so I didn’t have a lot of time to see celebrities. But afterward, I would hear who was there. I want to see David Beckham. That would be my dream. I really like that guy. His billboard for H&M in Times Square…so cool.

N.S.: I was really excited to see Lady Gaga, Rihanna, Rita Ora…and most of them attended at least one show.

What is always in your bag?

M.F.: A medallion from my grandmother, which is a lucky coin, a family photo and my phone, of course. No snacks—I always buy them. I always want to have fresh fruits or a sandwich.

N.S.: Basic beauty essentials like a hand cream, a Chapstick, a hair tie, a book or two, a bottle of water, an apple, headphones and a charger.

Will you try to top your show count next season?

The runways saw a slew of conspicuous coifs and reality stars—and regular folks, too.

In New York, Donna Karan drove home the urban ideal of DKNY by casting real New Yorkers, including DJs Hannah Bronfman and Chelsea Leyland, rapper Angel Haze, as well as lesser-known locals to don her streetwear collection on the catwalk.

FROM REALITY TO RUNWAY

Jacobs was just the beginning. In London, she made an appearance at Giles, while in Paris she nabbed coveted spots at Givenchy and Chanel.

Jenner was not the only reality star to make her runway debut this season: Gigi Hadid, daughter of The Real Housewives of Beverly Hills’ Yolanda Foster, walked Desigual and Jeremy Scott, fresh from her cover appearance on CR Fashion Book.

Crimson was a strong theme throughout Prabal Gurung’s fall collection. It was in the clothes, the nail art and, in the case of Natalie Westling, the hair. The natural brunette flaunted her recently dyed hair—a shade of neon fire-engine red—for the first time on Gurung’s runway, wearing a similarly hued ensemble. From there, she appeared at Marc by Marc Jacobs, Marc Jacobs, Vera Wang, Fendi and Chanel, among others.

Back in spring 2010, Karl Lagerfeld introduced a runway trend that caught on big: tattoos. The Chanel-branded ink might have been temporary, but the transferable tats sparked endless industry buzz. More fashion houses followed with inked-up models—Rodarte, Jean Paul Gaultier, Marchesa and Maison Martin Margiela among them.

This season, however, it was all about clean skin. With nary a faux tattoo in sight, much of any real ink was covered up. Cara Delevingne, for example, made headlines last fall when she got a lion’s head emblazoned on her right index finger. Yet the lion was seemingly back in its cage during the latest round of shows. At both Fendi and Chanel, Lagerfeld outfitted Delevingne in gloves, while Stella McCartney sent her out in knuckle-grazing sleeves. Apparently, bare is beautiful.