Now that the Republicans have left town, Seventh Avenue designers spent the weekend getting ready for fashion week, which begins on Wednesday. 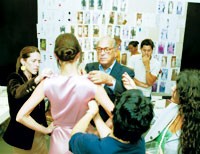 New York — Among civilians, it’s a little-known fact, but fashion folk are actually a hardy bunch. They are the practical sort who will let little stand in their way, especially when it comes to creating the potential 15-minute moment of glory that is the fashion show. That said, in preparing for this spring season, designers had two additional obstacles to accompany all the usual last-minute mayhem: an early start to fashion week, which will begin a mere two days after Labor Day, and the Republican National Convention, held right in the Garment District.

On Friday morning, Madison Square Garden (still bedecked like an overzealous delegate) and its surrounding environs were just awakening from lockdown. When he was asked if everything was back to normal, a cab driver responded, “Not yet. But it’s OK. Anyway, this is my first day back to work. A lot of us took the week off.”

Well, it was good to hear that cabbies had survived the elephant herd. But had the city’s designers fared as well? The answer: Sort of, but not without a few panic attacks here and there.

Since they expected the city to come to a complete standstill the preceding week, many had built in a cushion to allow for what-ifs. But some what-ifs couldn’t have been anticipated. Proenza Schouler’s Lazaro Hernandez and Jack McCollough were forced to redo their prints when they came in wrong. All was well, however, at their Chinatown design studio-cum-apartment on Sunday afternoon, as they pored over model cards for their one-girl-per-look casting with stylist Samira Nasr. Nathan Jenden, creative director of Diane von Furstenberg, for his part, found himself the victim of temporary blindness two weeks ago. “I scratched my left cornea. It was a line sheet that bit me,” said Jenden, who was working in the company’s 37th Street studio on Saturday afternoon. “I just sat in bed for a week, because I mostly see out of my left eye.”

Jenden assessed his company’s level of alert as “mild panic,” which seemed to accurately describe the situation at many other firms, too. Things might have seemed relatively calm at Vera Wang’s plush studio on Friday, but the designer denied it. “We’re seriously freaked out,” said Wang as she and her team worked on a tie-dyed yellow silk dress. “I had no evening dresses four days ago!” On Friday afternoon, Peter Som, whose knits hadn’t yet arrived from Italy, wavered between being relaxed and getting antsy. “I’m thinking about going to the Hamptons for a day,” he said. “But as soon as I say that, I get nervous.” According to Jeffrey Chow, “It’s like being on autopilot. You just go, go, go.”

Even cool-as-a-cucumber Carolina Herrera, who was at her studio on Saturday, admitted to a degree of tension and stress. “It looks calm in here,” she said waving her hand to indicate the clinically tidy sample room. “The nerves are inside.” But there was little indication of the latter as she laughed and bantered with design director Herve Pierre Braillard, and played with her dogs. “Monday, we do the fittings,” she explained. “The casting is finished. I don’t improve at the last minute. I’m not there the day before the show making new clothes.”

That was also the case for a few other industry veterans, who worked over the weekend but weren’t exactly pulling all-nighters. Although her shoes hadn’t arrived from Italy, and she was still awaiting denim deliveries from California, Anna Sui was utterly unruffled. At his Madison Avenue studio on Sunday morning, Luca Luca designer Luca Orlandi explained that his team was on schedule and proclaimed with a big smile, “We have 72 hours.” Over at Betsey Johnson on Saturday, the designer was in her usual bouncy form. “As soon as we finish one show, Betsey starts thinking about the next one,” explained her longtime design staffer Monica Paolini, as Johnson conferred with her publicists, who had stopped by with an almost-completed seating chart. In fact, the designer was set to leave at seven that evening for a dinner to celebrate her daughter Lulu’s engagement to lawyer Arthur Margulies, a cousin of Julianna Margulies, and intended to take Sunday off.

Ditto Oscar de la Renta, who was working with his design team and house model on Friday afternoon, but planned to be off on Sunday and Monday. “It’s going to be bad next week,” confided one of the seamstresses in the designer’s big sample room. Of course, de la Renta, who attended the RNC on Tuesday night, was happy to talk about politics. The designer had dressed Laura Bush for her speech, and he gave both the First Lady and the convention itself a big thumbs-up. “I was able to come from my house in seven minutes,” he said. “And I loved seeing so many policemen around.” While he admitted to never having seen one of Arnold Schwarzenegger’s movies, he graded the Governator’s speech an A-plus.

Alvin Valley is also a Bush fan, but, unfortunately, he wasn’t able to see his clients, Jenna and Barbara, during their whirl through town. “They called me on Wednesday night at 2 a.m.,” said Valley, who was at his studio on Friday. “But I was still working and couldn’t go out.” With his show a mere five days away, the designer planned to work through the weekend. “I’d Continued from page 6

like to say that we’re on schedule, but I don’t think we are. We still have to do evening and swim,” he said calmly. In the background, three seamstresses were toiling away, handbeading fabric and customizing lace.

But not everyone felt the way Valley did, about either politics or their schedules. Down at Zac Posen’s Laight Street studio, the air was charged with activity, and the designer’s usual good humor and enthusiasm, while present, were touched by an edge of tension. Posen’s bags, en route from Colombia, had been held up by a phenomenon that dominated post-convention news: Hurricane Frances. And of course, since the Italians had only recently returned from their month-long holiday, his Manolo Blahnik shoes, which are manufactured there, were AWOL, as well. In terms of politics, Posen is in a different camp from Valley and de la Renta. Though Barbara Bush attended his last show with her cousin Lauren, Posen’s face darkened when he was asked if he saw the First Daughter last week. “I don’t really know her,” he said. “I’m a very liberal Democrat. I would be protesting if I wasn’t working.” He quickly explained, however, that he doesn’t hold anything against the children of those whose politics he opposes, and he added more brightly that Kate Edwards had recently become a client.

While Posen said that he found the convention disruptive only in terms of the morale in the city, others did experience more concrete disruptions. As Four’s Gabi said that he was harassed by the NYPD while up in the Garment District, and Narciso Rodriguez reported that he could hear the protesters chanting from Union Square at his Gramercy Park studio. Still, on Friday afternoon, Rodriguez’s studio had all the controlled serenity of one of his intricately crafted dresses. “It’s always calm here,” he said, while seeing models with design staffer Jacky Marshall and studio manager Daniel Pfeffer. “There are only two people who have ever lost it here. And one was asked to never come back.” However, when reminded that his show was 11 days away, the designer responded, “Oh, don’t tell me. I’ll throw up.”

Over at Kenneth Cole’s 50th Street studio on Sunday afternoon, the designer seemed too tired to have an attack of nerves. But even lack of sleep didn’t get in the way of his well-known way with words. “The convention makes for a very unconventional fashion week,” said Cole, whose usual Friday-morning date had been shifted to Wednesday. With little more than three days left before show time, Cole’s team, along with stylist George Cortina, had put in long hours all weekend. “The show is styled, but we’re doing fittings,” Cole explained. But was the preshow movie finished? “That gets done after the show’s work,” he said. “Far be it for us to make it easy. We’ll be editing all night long before the show.”

Weekend activity was also high on the Off-Off-Seventh Avenue scene in the East Village and Lower East Side. On Sunday, Miguel Adrover’s Chrystie Street studio was a veritable hive of activity, with 30 people, almost all of them unpaid, toiling away on his labor-intensive pieces. And that was a light day, explained Adrover, adding that, on most, he had 45 or 50 people working. At another atelier just a block away, the scene was somewhat less hectic. On Sunday, Bryan Bradley was enjoying a laid-back moment with team Tuleh’s Amanda Brooks and Lillian Wang von Stauffenberg, intern Fiona Angelini and show producer Jack Alexander. However, he explained that, on Saturday, the studio had been full of sewers working furiously. And when asked about the casting, he shot back, “The casting? Are you crazy?” Then he turned to ask his publicist when said casting was scheduled. “I don’t know,” he added. “We just keep making clothes.”

Behind the silver door of Richie Rich and Traver Rains’ Seventh Street Heatherette studio was a mix of the two modes: lots of work mixed with plenty of play. “This is the fun part,” Rich explained. “Fittings are the beginning of the end.” While the designers were also three days from presenting their first show in the tents, Rich was in high spirits. When this season’s muse, Lydia Hearst-Shaw, arrived for a fitting, he exclaimed, “We’re collecting muses like people collect butterflies.”

But the weekend warrior who was without a doubt furthest ahead of the game had to be Brazilian designer Alexandre Herchcovitch, who only had to finish his casting and a few final details. The reason? The advantage of designing on the other side of the equator, where seasons are reversed. “The clothes have been ready since July,” said Herchcovitch. There must be plenty of his colleagues at the moment who wish that they could say the same.