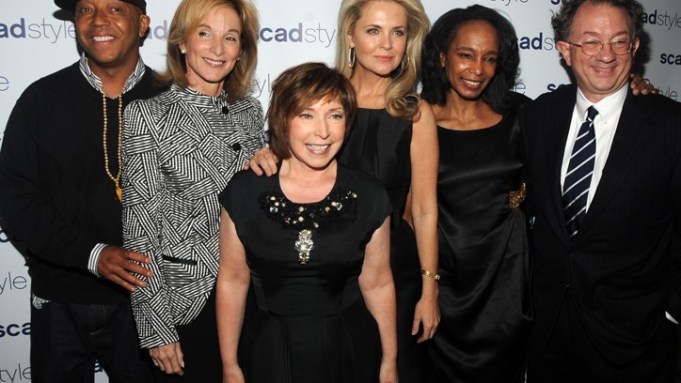 Design’s purpose may not always be evident to the naked eye, but now is not the time to turn away from the medium.

That was a recurring message from this years’s winners of the Savannah College of Art and Design’s Style Etoile Awards — Russell Simmons; actress and philanthropist Cornelia Guest; the Washington Post’s Robin Givhan; costume designer William Ivey Long, and New York City Planning director Amanda Burden. During Monday’s gala at the James Cohan Gallery in New York, Simmons said, “We live in a society that undervalues art as just an expression. This whole country will only survive when we put more arts in the schools, and when we cultivate creativity in children.”

SCAD will further its commitment to the design-minded by honoring Isabel Toledo with the André Leon Talley Lifetime Achievement Award May 16 at its annual student fashion show.

Yigal Azrouël, Lars Nilsson, Cynthia Rowley and Michael Fink, all of whom have visited SCAD students, were on hand for Monday’s affair. Givhan, who will relocate to Washington to cover the First Family, said, “…even if we never buy a $2,000 gown, live in a million-dollar home or have the opportunity to see a magnificent play on Broadway, creativity still enriches our lives in ways that are rather surprising. At a time like this, we cannot underscore enough how important creativity is because as we pull back, hunker down and hold onto our pennies and think about the things that are most fundamental in our lives, sometimes we forget how important creativity is. Creativity has to flourish in the worst of times so that it will be there for us in the best of times.”

Long praised the school for its varied curriculum. “When you’re a youngster and you know you have some dreams in your head, but you’re not exactly sure what those dreams are or where they should be going — having these options so you don’t have to say, ‘I’m going to be a…’ like many schools in the world [do] — that is really truly your gift to education,” he said.

Guest offered another take: “It’s so important now, especially at this time, for us to create as many beautiful things as we can and to be as nice to people as we can, because that’s what style is all about and it’s a way of living.”