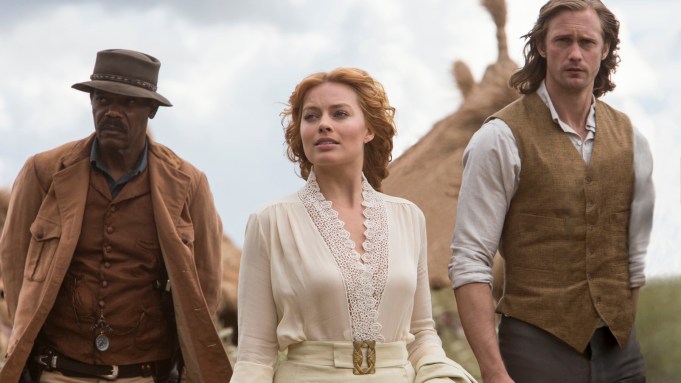 British costume designer Ruth Myers was discussing a movie that fell into the latter “job in a million” category: “The Legend of Tarzan,” out on Friday.

She was recruited by one of the film’s producers who had previously worked with her on “Golden Compass” in 2007, and thought her style would be a fit for “Tarzan.” “I talked to [director] David Yates and they sent me a script. As very occasionally happens when you get a script that just talks to you, I sat and did maybe six or eight drawings,” Myers recalled. “To draw before you’ve talked to anyone, even though you’ve seen the script, is a bit like undressing in public. You’re literally going, ‘here’s me.’ It’s terribly exposing, and a bit frightening. So you have to feel that passionately to do that.”

The passion was palpable: Yates responded positively to her drawings, and Myers got the job. “He wanted to make a period film that didn’t look period,” Myers said. “I really had to sit down and think about how I could do this without doing costumes that were appalling for the period, but by the same token trying to make them feel just very, very available. It was a hard thing to do.”

Myers was presented with a starry cast to costume: Alexander Skarsgård as Tarzan, Margot Robbie in the role of Jane, Samuel L. Jackson as George Washington Williams, and Christoph Waltz as the villainous Leon Rom. “There wasn’t a lot about this [film] that wasn’t great. First of all, the actors: talk about the dream team. I’ve never had a group of better actors in my life,” Myers enthused.

The film begins in late Victorian London, and the costumes in the beginning of the film reflect the fashions of the era. “The main idea was to keep him incredibly buttoned-up and tight,” Myers explained of Skarsgård’s look early in the film. “I mean his clothes were overtight, with the sense he was someone just about to burst out of his clothes and revert to who he was in his skin,” she continued. “Alexander worked so, so hard to physically become Tarzan. The only challenge there was, even during shooting, his body shape changed quite dramatically because he did so much working out.” To keep his look form-fitted, Myers had to make daily micro-adjustments to Skarsgård’s costumes for the changes in his physique. “We were changing his britches on a daily basis as his body became more and more ripped, more and more fit. He was enormously patient because virtually every day we’d drag his things away and then refit them and bring them back.”

It helped that virtually all of the costumes in the film were original pieces, bespoke down to the smallest of detail — most of the fabrics were custom-printed or dyed. Going the custom route was also a matter of practicality: as the characters venture into the jungle, their outfits become increasingly worn. Margot Robbie’s character clocked in nearly 300 versions of the same dress design to reflect the various states of its deconstruction.

“[Robbie] will not only wear what you ask her to wear, but she’ll work it,” Myers said. “One of the fun challenges was from about a third of the way through the film — I think she only has about four outfits — and then she changes into the outfit in which she gets captured and Tarzan goes to find her, and they’re then in the same outfits the rest of the film,” she explained. “And there were 10 varieties of each of their outfits. We went through the script very, very carefully, working out at which point they disintegrated and how they’d look. So each one was essentially like a completely different costume.” In the case of Margot’s Jane, her dress gets dragged in and out of water, becoming more stained and ripped as the movie progresses. “In my drawings, for [Tarzan and Jane], I have 10 varieties from the original costume to the final costume. Not only 10 varieties, but I think they had 30 of each of the 10 varieties because there were doubles, and they got wet.”

It may not be the standard Victorian elegance, but Myers found the less glamorous style of costuming highly rewarding. “It’s always nice when you’re designing costumes and they’re not just pretty costumes but also to make sense, to tell part of the story,” she said. “That is essentially the best way to see the sort of job I have: as a storytelling job.” 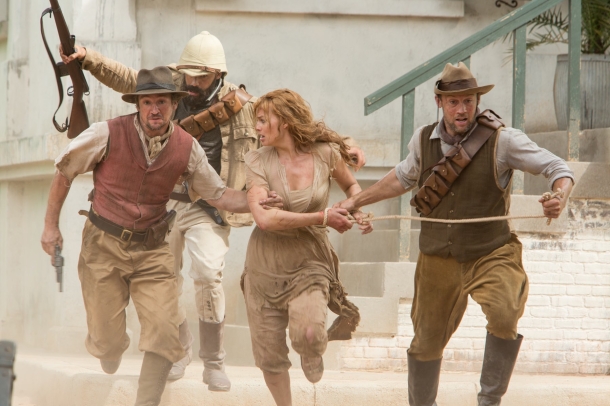 Myers also skewed period-piece when it came to Samuel L. Jackson and Christoph Waltz’s costumes. Jackson’s character starts off “looking very much like a Victorian dandy,” Myers said, noting details of his look: a watch chain made with horse hair, a red-and-purple-checked waistcoat, boots that blend Victorian and cowboy. Meanwhile Waltz, who portrays Belgian captain Léon Rom, is dressed in white linen throughout the film, a hat tip to the main character in Werner Herzog’s 1983 film “Fitzcarraldo.” While the other characters’ costumes disintegrate, Waltz’s remain pristine. “There’s a point in the film when he opens his closet and you see all of these beautiful white suits, and all of these beautiful panama hats and boots all lined up,” Myers recalls. “There’s this sort of running joke that he constantly looks exquisite because once one gets dirty, he changes it for another beautiful white suit. In the midst of this chaos with people in loinskins and beads, filthy and ripped to pieces, there Christoph Waltz is, dressed in clean white linen.”

The film uses a fair amount of CGI, but Myers noted that this presented minimal challenges from a costuming standpoint. “I’ve done a few CGI-type films now, so you sort of know what you’re going into and I’m used to it,” she explained. “It doesn’t present the sort of challenges it did in its very early days, when you couldn’t use certain things. You have to be very aware of what colors you’re using, because essentially you’re painting a picture, but you’re not painting it with the background painted in,” she continued.