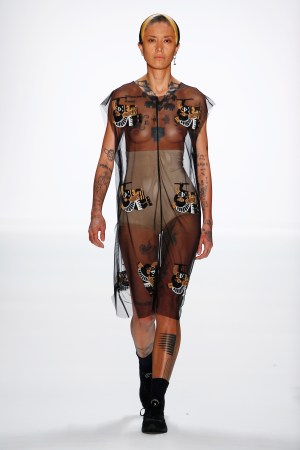 Sadak designer Saša Kovačević’s extravagant, oversize streetwear took a more serious tone this season. His often wild color palette was somewhat more sedate, to good effect. Color-bocked camouflage-cum-Rorschach prints in olive and sand came on button-downs and collarless shirts. Full cuffed shorts had saronglike draping in front, while printed mock turtlenecks in camel-toned cashmere were nicely fitted and wearable. Tribal beading was worked into face coverings and waist accents, and sparkled from a cashmere coat with a military-esque embellishment. Islamic-influenced illustrations appeared on long shirts and overskirts, sometimes matched with megastripes. Blazers were cropped high under the shoulders to expose shirt patterns, but that’s not all that was on display. Slashed backs and open legs provided more than a glimpse of flesh, demonstrating that even when relatively restrained, Kovačević has a wild side.