“It’s such a strong presence in the zeitgeist," said stylist Andrew Gelwicks of the fashionable show, which seemed to influence the playful mood on the SAGs red carpet.

Is the Screen Actors’ Guild Awards the night everyone wears their third favorite look? Well, they don’t have the international reach of the Oscars and Globes, and the red-carpet show isn’t even on TV. So what saved the night on Sunday? “Schitt’s Creek” chic.

Stylist Andrew Gelwicks, who dressed “Schitt’s Creek” maven Catherine O’Hara in Marc Jacobs’ shimmery orange crush of a column gown, credits the show’s wickedly cool costumes by designer Debra Hanson for encouraging people to have more fun with clothes and accessories. “It’s such a strong presence in the zeitgeist,” he said. “To be able to bring that out of ‘Schitt’s Creek’ and onto the red carpet and into fashion is exciting for Catherine and the whole cast.” 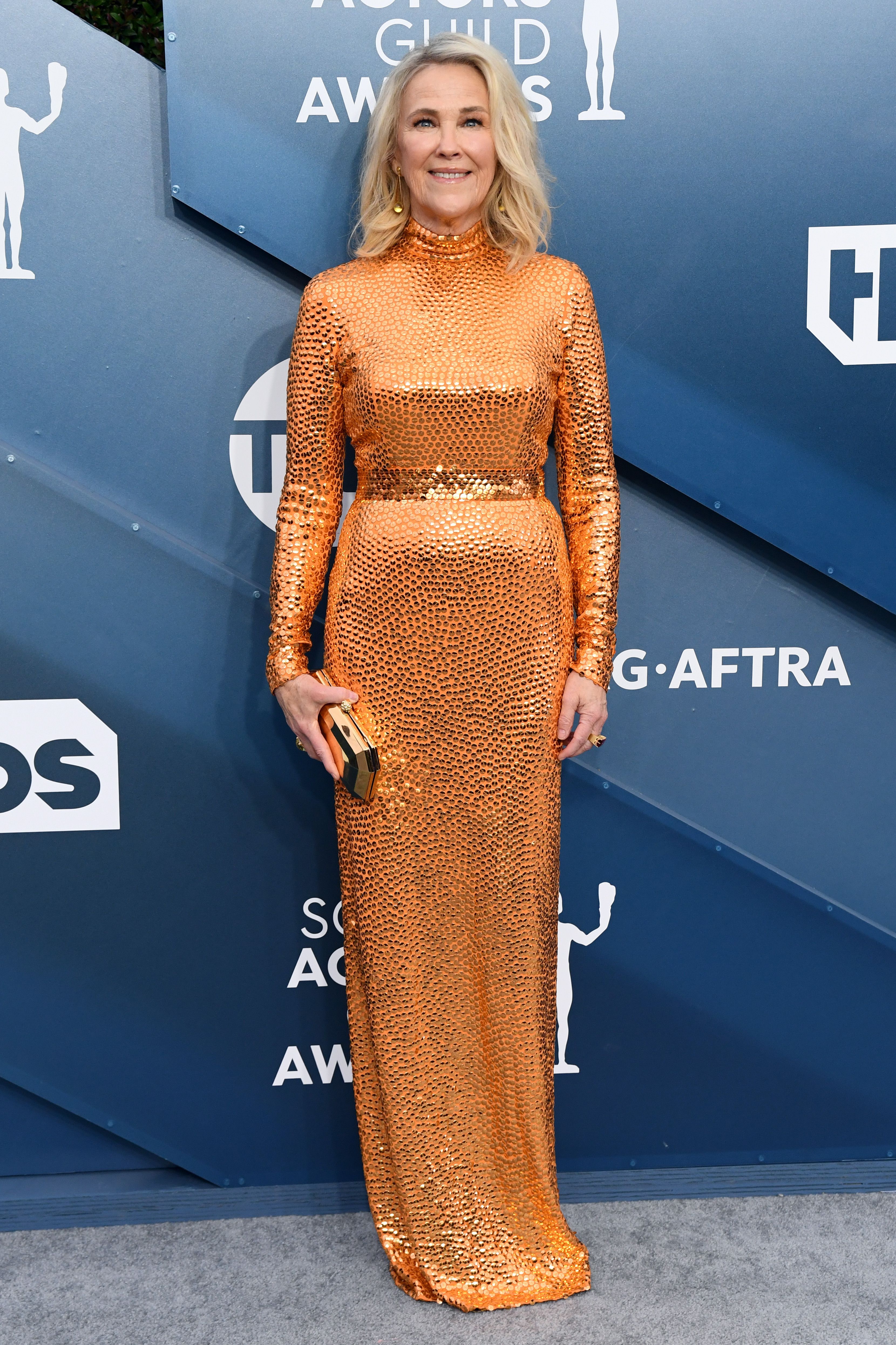 The sentiment played out on the red carpet, where bows, belts, bare midriffs, hair jewelry and a baby blue Balmain tuxedo brought the fashion fun.

One of the best-dressed men was “Schitt’s Creek” star Dan Levy in a Dior Men overcoat embellished with a white rose, a nod to his Rose family in the fashion-tastic show, and a tuxedo with the crossover lapel that has become a Kim Jones signature.

“On the show, his character does the black-and-white thing with the sweaters and kilts, and it’s amazing he gets to have that fashion outlet,” said his stylist Erica Cloud. “But I think it’s important to have the separation of David and Daniel who appreciates fashion just as much. So we’ve gone more streamlined while still trying to have fun,” she said of their awards show dressing strategy. 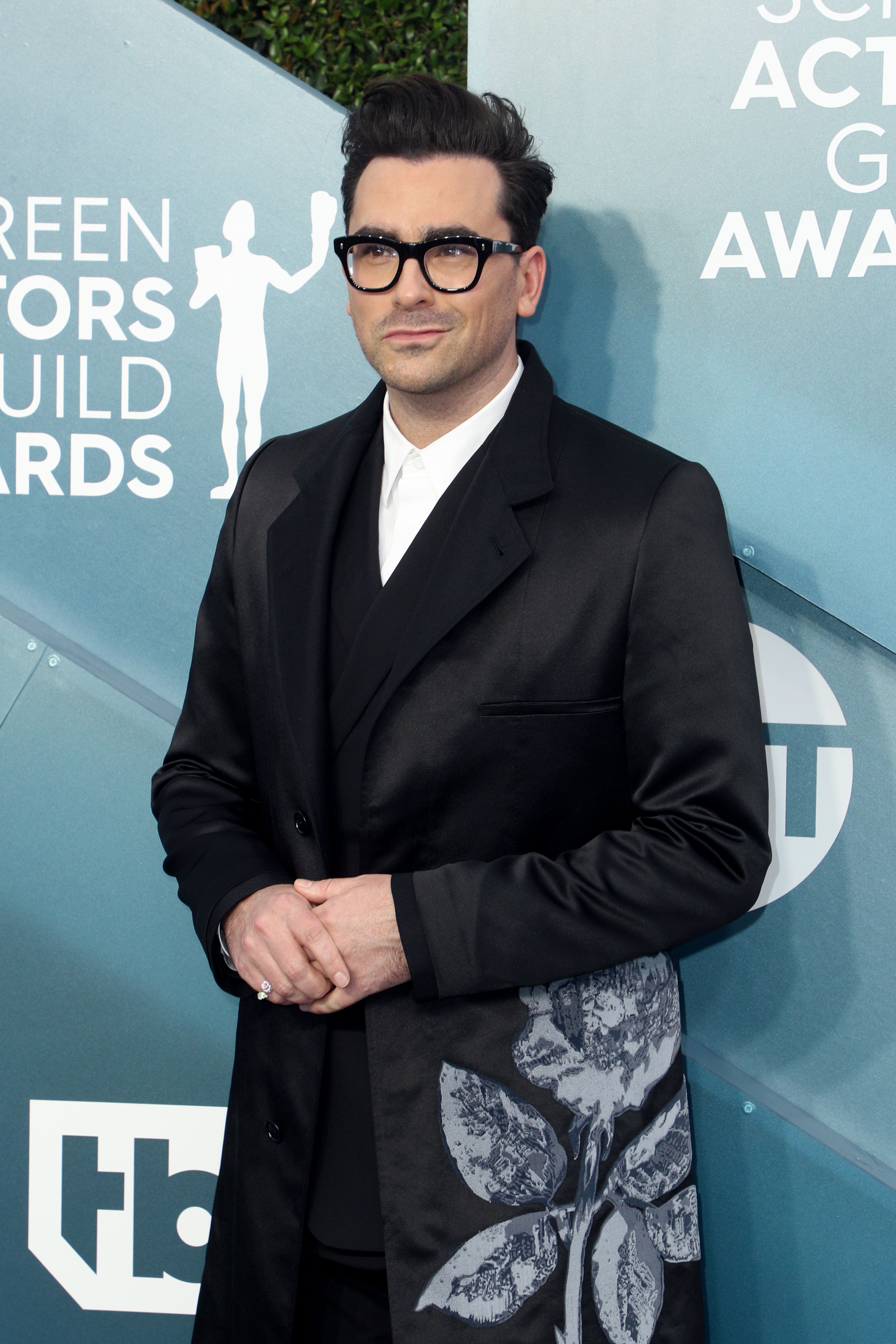 Papa Eugene Levy also looked playful in a Boss burgundy and black printed herringbone tuxedo. Meanwhile, “Fleabag” hot priest Andrew Scott wore an Azzaro Couture mauve tuxedo and pink shirt, and “Stranger Things” kid Noah Schnapp, all of 15, brought back the baby blue tux from before he was born, collaborating with Balmain’s Olivier Rousteing on the look paired with a shirt sans tie and white sneakers.

“It is a beautiful combination of sexiness, masculinity, and fashion,” said his stylist Philippe Uter. “His talent at such a young age and his devotion to his work shows so much strength to an entire generation,” added Rousteing in an e-mail from Paris. 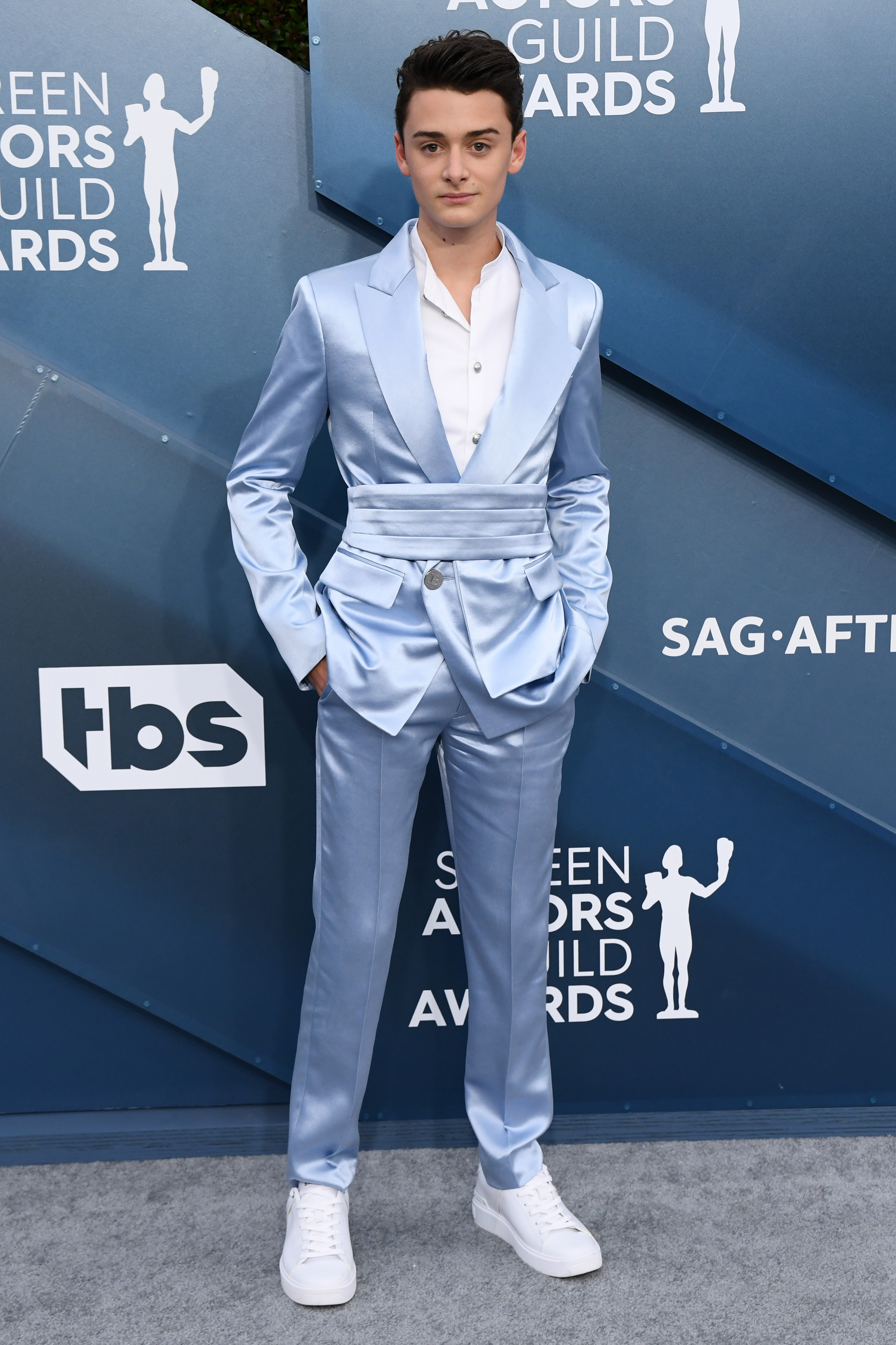 For women, the bare midriff was the new power sleeve (the better to show off all that work in the gym), as seen on Charlize Theron’s simple and modern-looking Givenchy sparkle sports bra top over black skirt look, and Dakota Fanning’s dreamy cutout crystal mermaid gown by Valentino.

Continuing from the Globes, deconstructed tuxedos and suits for women were also a statement. Exhibit A: Millie Bobby Brown, only 15, but looking every inch the red-carpet pro in a custom white silk taffeta coat dress and pants by Louis Vuitton. It was one of the best red-carpet looks from the brand in a while (loved the floral brooch, too). Margaret Qualley’s iridescent black wool crepe Chanel suit from the Métiers d’Art collection with a giant crystal camellia at the neck was also fresh and edgy. 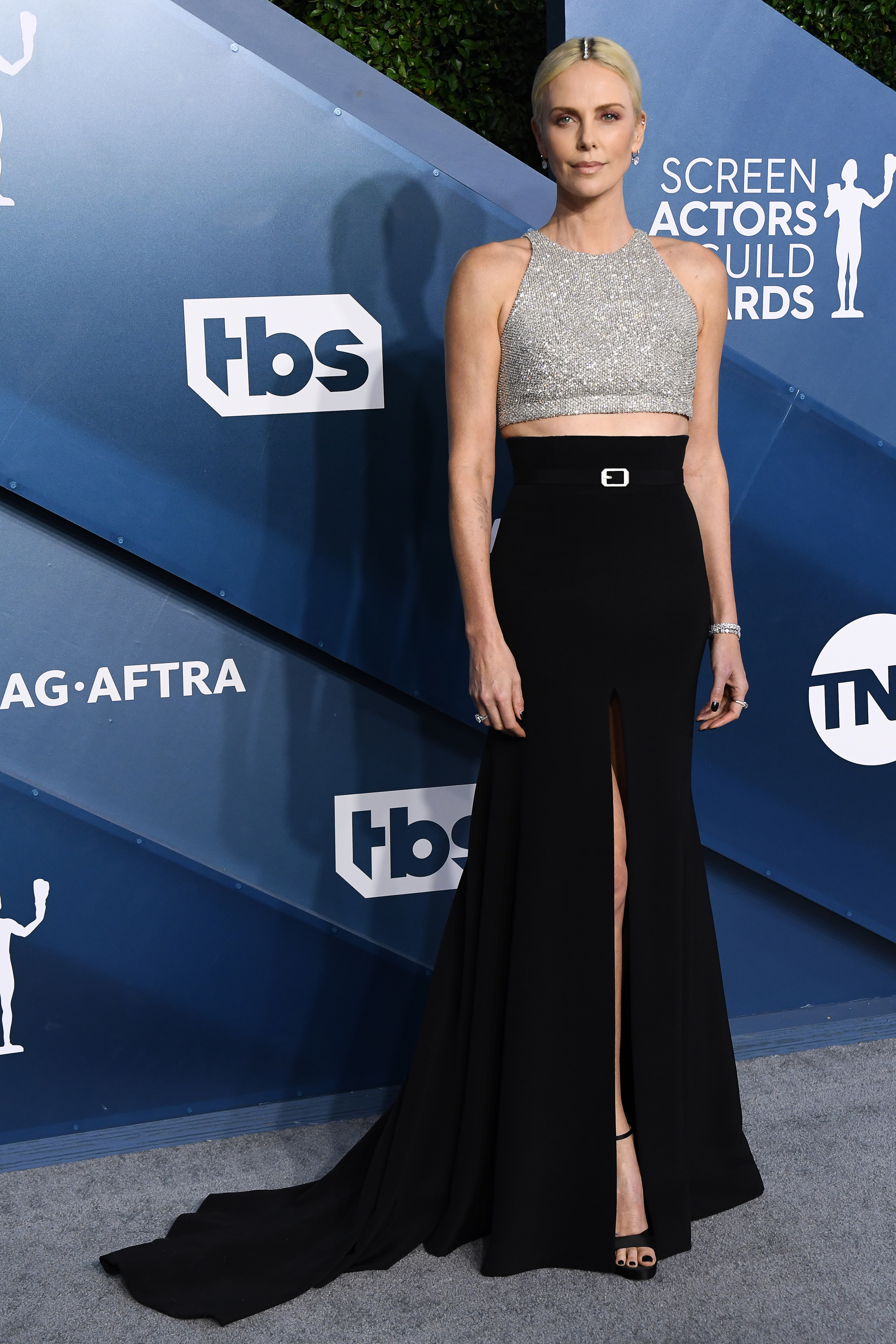 Jewel tones made a strong showing (Cynthia Erivo became the second in Hollywood after Beyoncé to wear Schiaparelli by new designer Daniel Roseberry, a red-and-fuchsia confection that was cheery if not overly original.) And there were nods to the Nineties in Jennifer Aniston’s vintage Dior by John Galliano white slipdress, and Reese Witherspoon’s tough-chic black and crystal Celine column.

There were quite a few creative sparklers, from the Tiffany & Co. diamond bracelet nestled into the part of Theron’s hair (“I didn’t have time to do my roots,” she quipped), to the crystal straps on Scarlett Johansson’s draped Armani Privé teal blue plunging silk gown, to the diamond feather Forevermark brooch in Michelle Williams’ hair.

No afterthought, accessories were back in a big way. Zoe Kravitz went Sixties glam in elbow-length white gloves with her peach Oscar de la Renta gown and Helena Bonham Carter went, well, herself, hamming it up for the cameras in her red-carpet sunglasses. So cool, she has to wear shades. 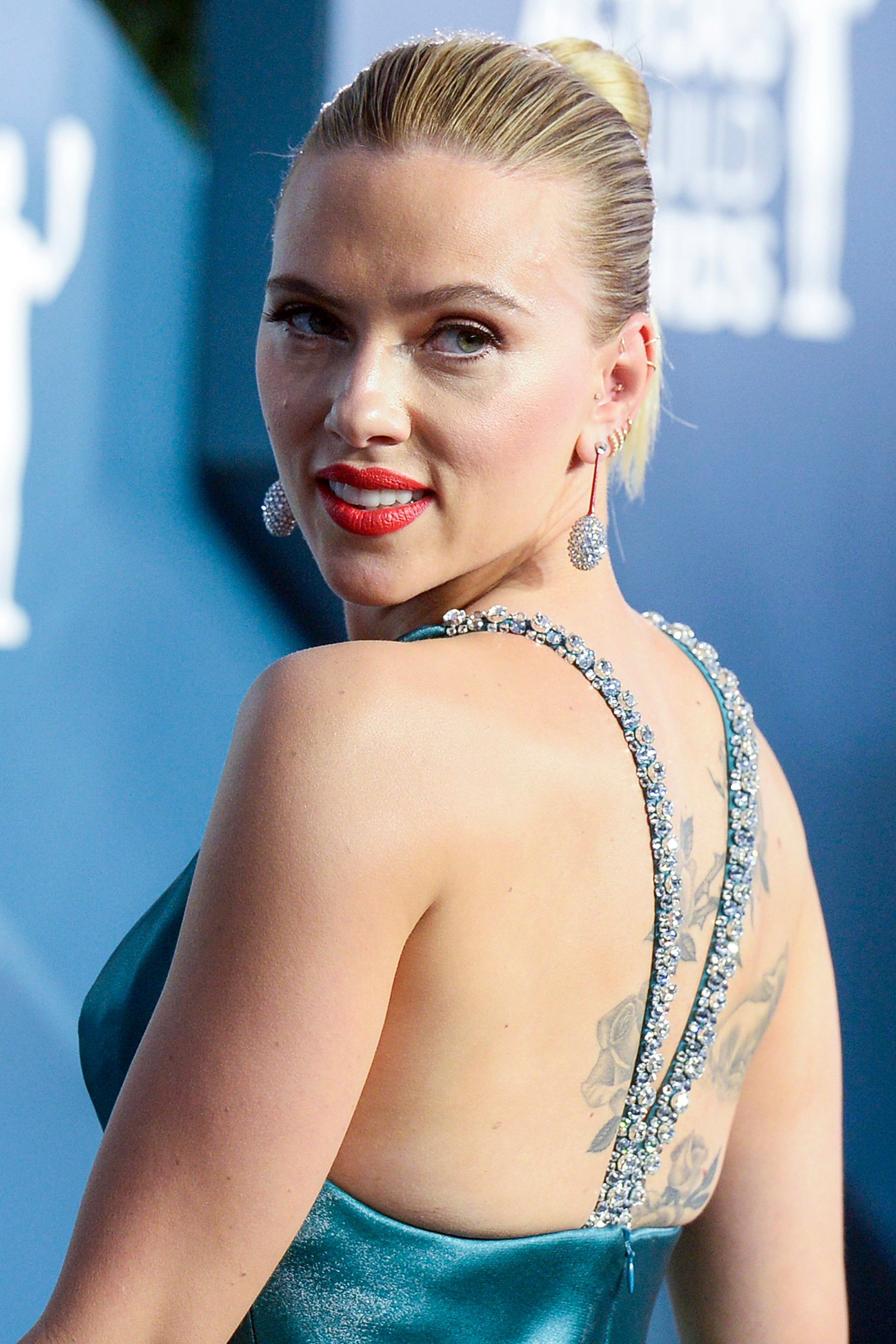 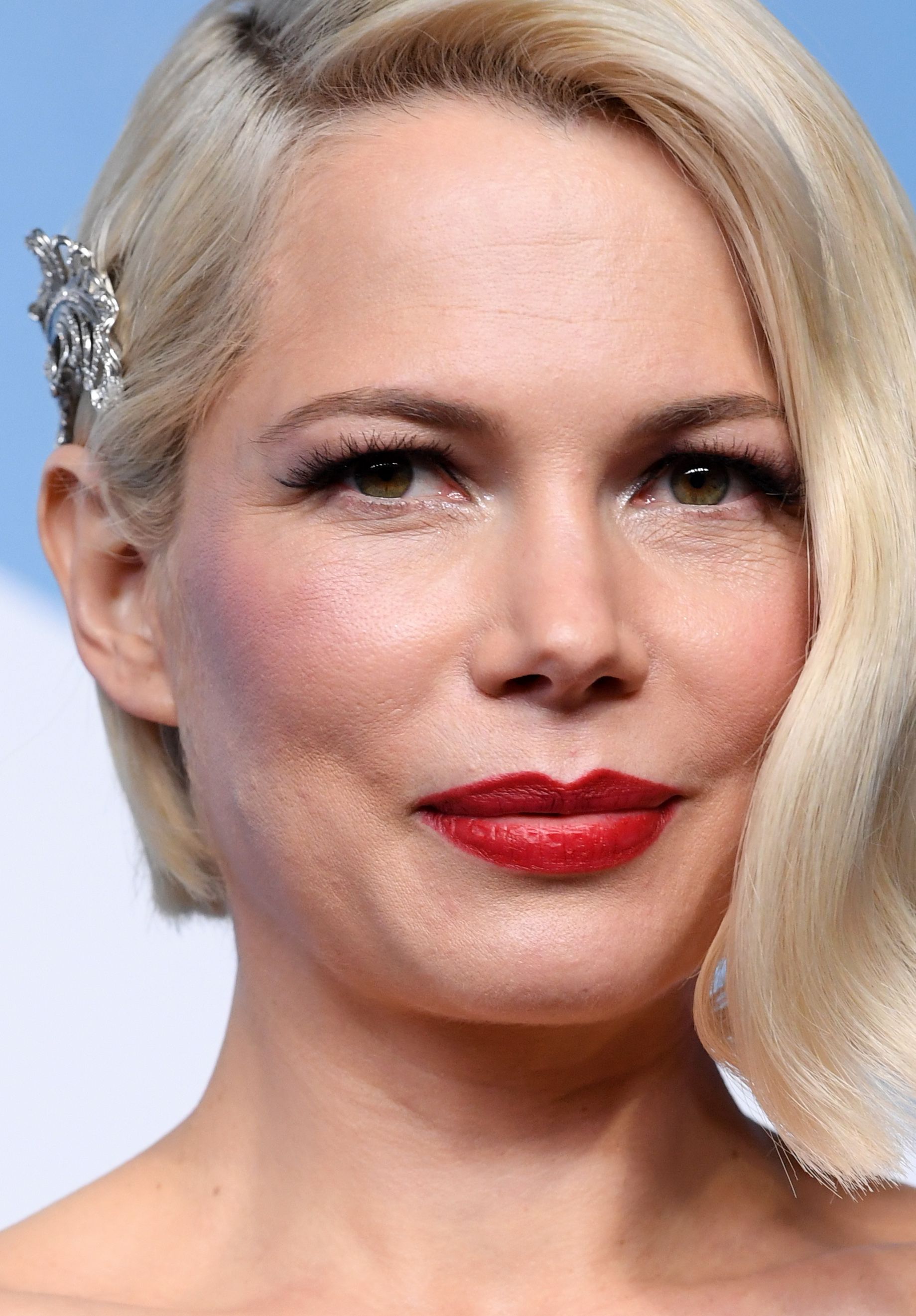 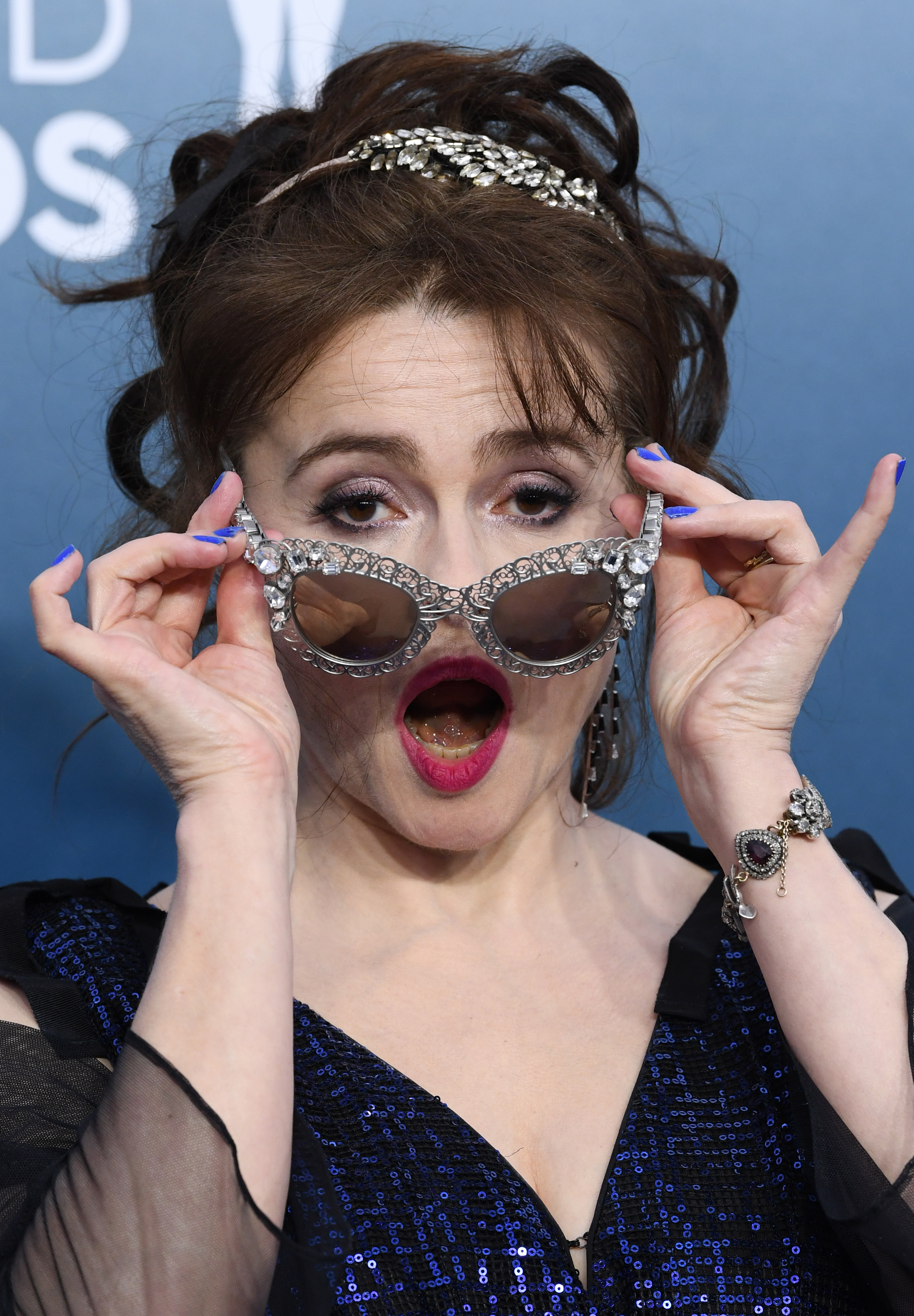 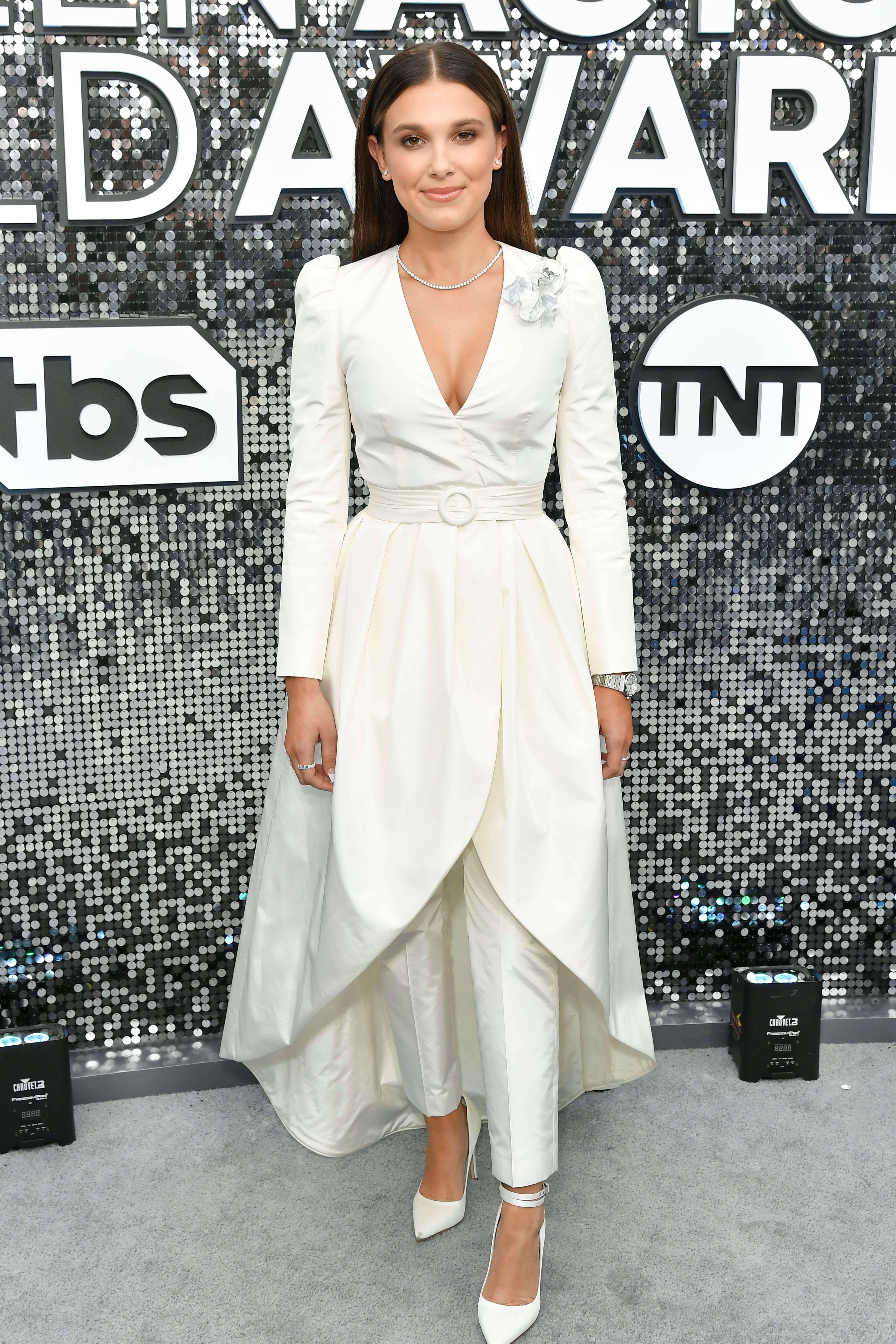 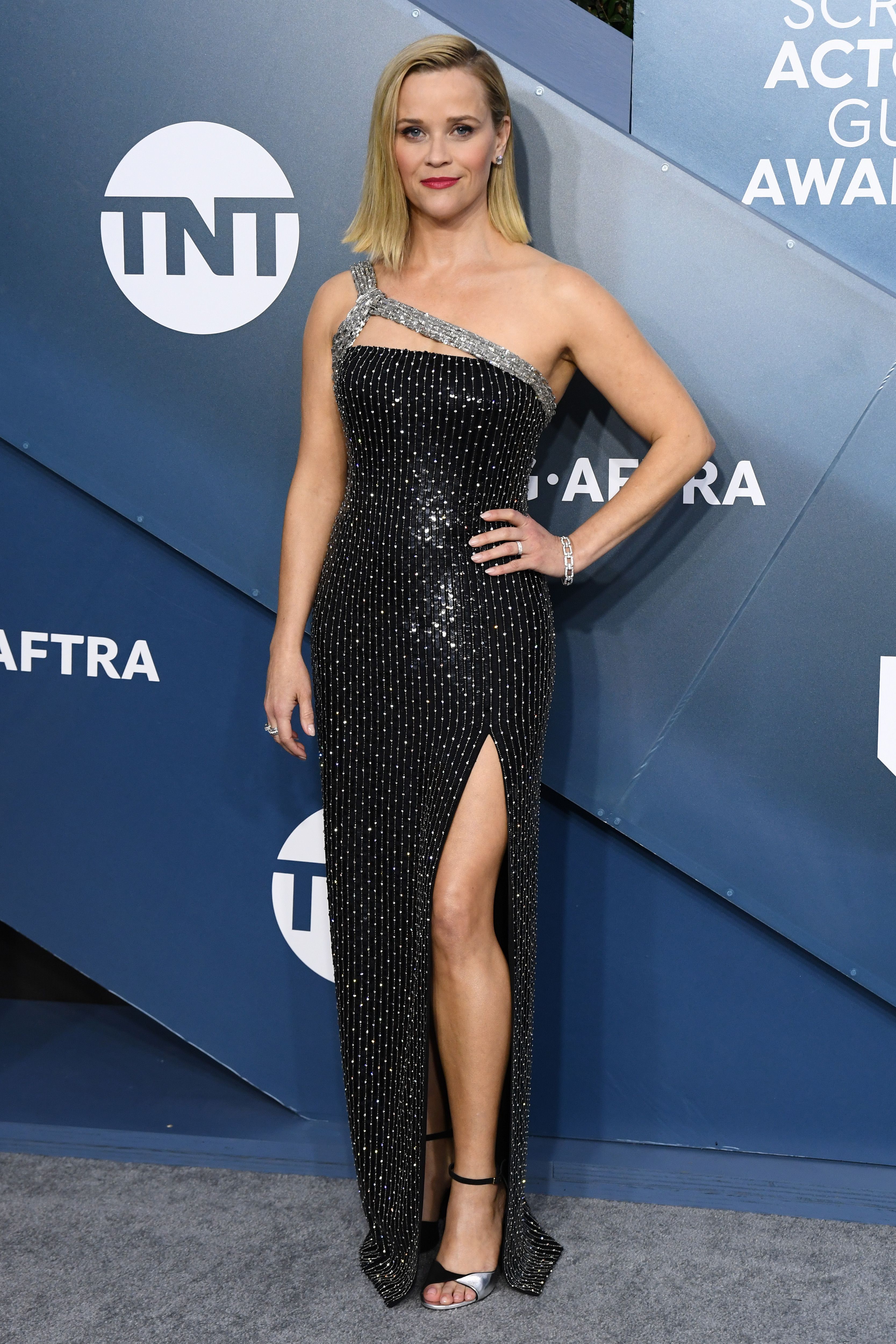 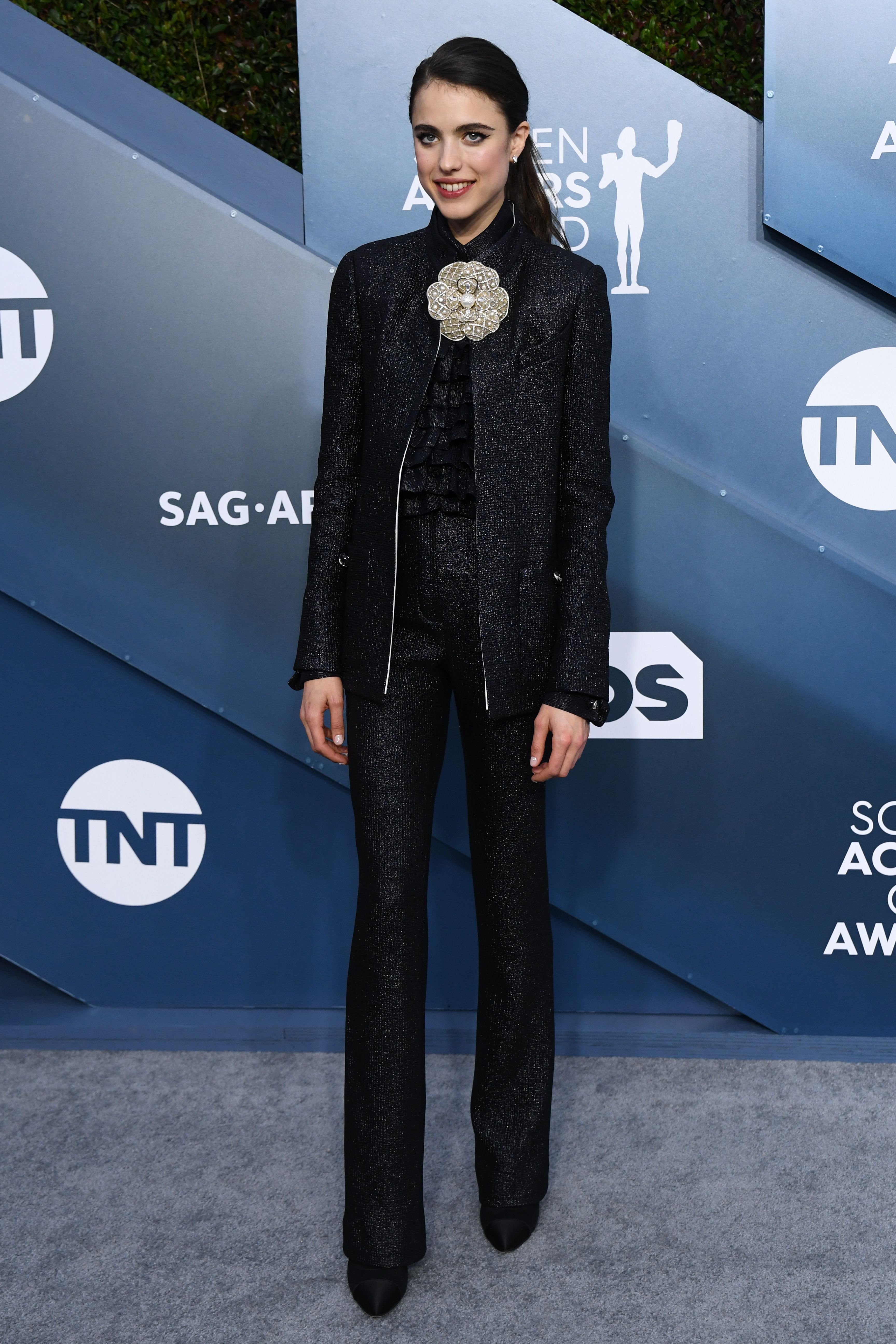 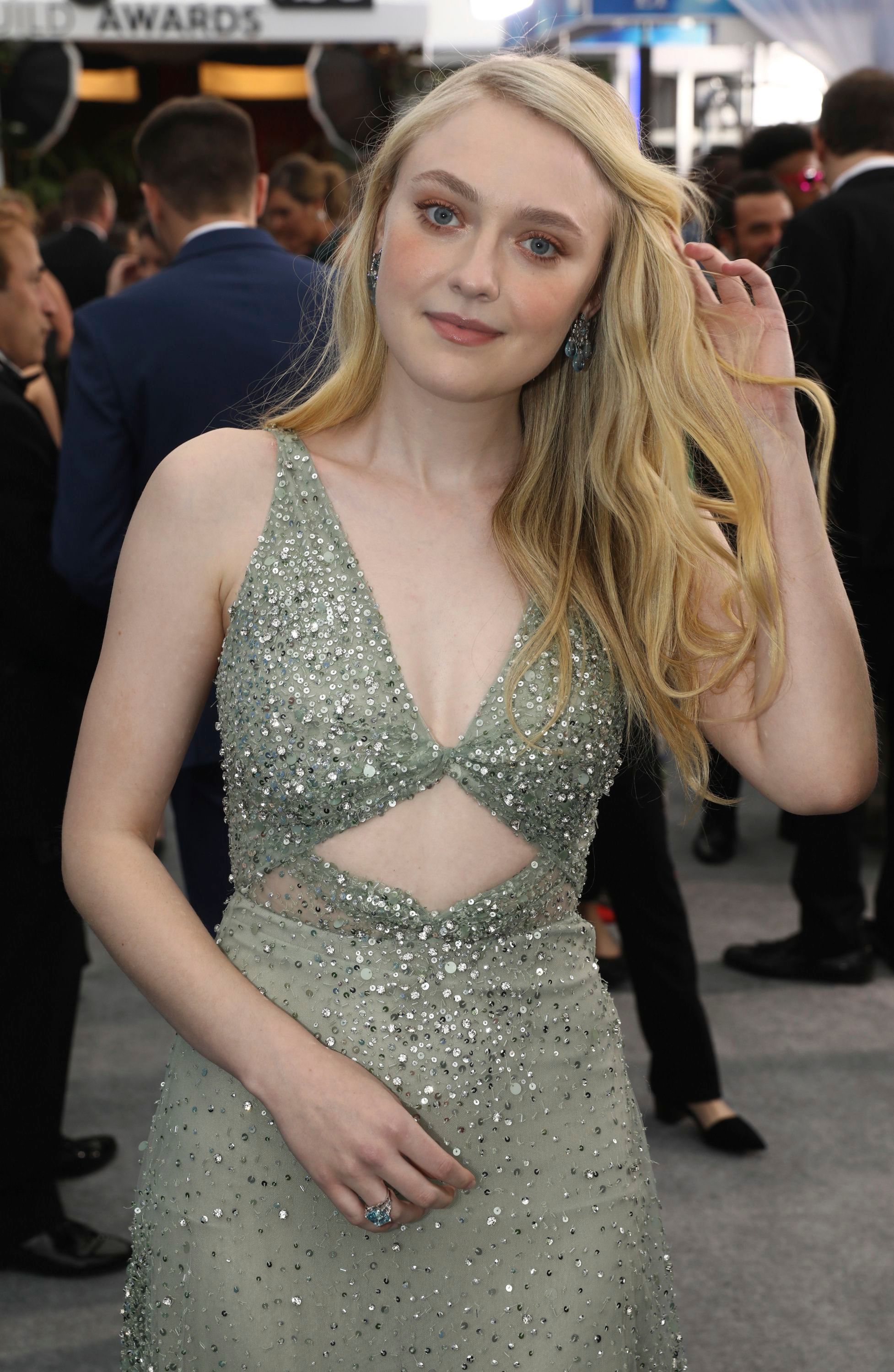