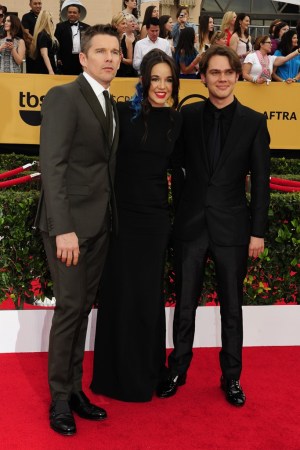 The only trend on Sunday night’s SAG Awards red carpet seemed to be to bypass it altogether. Julia Roberts, Reese Witherspoon and Julianne Moore skipped the press line, beating the heat by sneaking inside. Steve Carrell was the exception, patiently waiting to have his picture taken. Conversely, a reluctant and apologetic Felicity Jones cut past Steve Buscemi — at her publicist’s insistence. Perhaps the Oscar-nominated “Theory of Everything” actress is still warming up to her movie-star status.

“Boyhood” director and proud papa Richard Linklater snapped photos of his daughter Lorelei — who stars in his Oscar-nominated film — as she posed in a Gothic chic black dress. Could the young actress stop for a moment to talk shop? “I don’t think I can,” she mumbled, on the arm of Ethan Hawke.

While many stars remained mum on their sartorial choices, “Birdman” star Edward Norton was more than willing to divulge that his suit was by Calvin Klein and that he selected it because, he laughed, “I like up-and-coming American designers.”

Back on the photo line, even the starriest of television actors were fighting to hold their place in line. “No cuts! No coconut-cuts!” Julie Bowen teased as she waited patiently. Meanwhile, Amy Poehler and Natasha Lyonne kept one another company. “Sorry, sorry,” Poehler politely declined, when a reporter begged her to chat.

Other attendees were more loose-lipped. Julianna Margulies selected a gown by Giambattista Valli. Though a red-carpet veteran, the actress proved speechless when asked her choice. “I don’t know. What can I say? I loved the color. It’s comfortable. And it fit me.”

Others had diverse sources of inspiration: Maggie Gyllenhaal liked her Thakoon dress because it reminded her “of Anjelica Huston in the Seventies.” Kaley Cuoco selected her Romona Keveza for its color; Gretchen Mol’s Dennis Basso for its silhouette and sparkle; Natalie Dormer’s Naeem Khan for its softness; and, naturally, there was the cliched response: comfort.

Per tradition, “Modern Family”‘s Sarah Hyland nibbled on pizza provided by a journalist. Her custom-made Vera Wang, with its intricate beading, managed to survive just fine. “They’re so wonderful to work with — and so beautiful and elegant,” she said, before apologizing: “Sorry. I’m burping from the pizza. I’m like, ‘They’re beautiful and elegant,’ and I’m belching. So, that’s great.”

Closing out the carpet, Matthew McConaughey and his wife Camilla Alves both hugged Lenny Kravitiz. Shortly after, Naomi Watts and Liev Schreiber swept in and gave air kisses all around. McConaughey fixed his cuffs while posing for pictures just before a handler stepped on Alves’ train. The model remained cool and calm. “That’s OK,” she said of what’s likely a common red-carpet casualty for any veteran. Emma Stone’s train proved more manageable, but it still required her publicist to arrange it just right for photos. “Why, thank you,” Stone purred, posing in her black Dior Haute Couture. Late arrivals Jennifer Aniston and beau Justin Theroux were the last to walk. And with that, it was showtime.