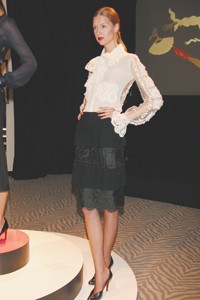 NEW YORK — In a must-win season, Saks Fifth Avenue will take a strong stand behind 21 key looks and build an entire fall campaign around them, called “Want It.”

The promotion will encompass advertising, shopping bags, catalogues, even original collages that depict the products in witty ways. Saks’ “must-haves” — from Chanel’s sexy deep-red lipsticks to Gucci’s skinny-legged jeans and Missoni’s sweater jackets — will be played up chain-wide starting Sept. 13 when “Want It” kicks off.

The 55-unit, $2.7 billion Saks has been struggling with poor sales and margins, but has been developing strategies that hopefully will kick in beginning with the promotion.

At a press conference on Monday at Saks announcing the campaign, Andrew Jennings, president and chief operating officer, said the initiative represents “the start of seeing the sales curve ticking up,” and is “a key tenet” of the Saks business strategy. “It focuses on a broad range of our customers and offers key fashion trends in an array of price points and styles.”

The promotion dovetails with the overall Saks strategy, which concentrates on “good, better, best” pricing and “classic, modern and contemporary” merchandising.

The merchandising program involves what Saks’ vice chairman and chief merchant Ron Frasch called capitalizing on Saks’ “sweet spots.” He pointed to an expanding bridge business, which has casual and “modern” components at Saks. “We’re identifying all kinds of businesses where we excel and enhancing our matrix on a store-by-store basis,” Frasch said.

In the casual bridge zone, Frasch cited Escada Sport, Eileen Fisher, Ellen Tracy and Dana Buchman as among the key labels. In the modern zone, he mentioned Tory Burch and Tahari as among those brands exhibiting a “little more fashion motivation to them.”

Other labels to be bolstered are Ralph Lauren, Akris Punto, Piazza Sempione and Armani Collezione.

At the flagship, several second-floor designer shops are being renovated, and the sixth floor will have new Ralph Lauren men’s shops for the designer’s Purple, Black and Blue labels.

This week, shops for Agnona and Loro Piana are opening at the Fifth Avenue flagship. Saks has been negotiating to bring the two labels into the flagship for a year or two, Frasch acknowledged.

On the accessories front, Frasch noted that Chloé and Fendi handbag shops will be built for fall selling and Graff jewelry is being expanded, among other steps being taken in 2006.

Frasch stressed the chain’s “good, better, best” and “classic, modern and contemporary” grid approach to the merchandising is not aimed at broadening the customer base or Saks’ appeal. It’s more about bringing in shoppers who may have defected to the competition and adding customers that fit the store profile. The pricing still runs from bridge to designer. “We are servicing a customer who we perhaps have not serviced so well in the last couple of years,” Frasch said, an admission that store executives have made repeatedly during the last few months.

While many initiatives are under way, fall’s outcome will be largely affected by the success of “Want It” and Saks has to do better than last year’s campaign, which may not be too hard to top. Last year, Saks worked its fall strategy in a reverse way. The marketing department came up with a merchandising handle built upon stocking up on cashmere. While store executives deemed the subsequent “Wild About Cashmere” promotion a success, Saks’ fall sales figures were hardly impressive during the fourth quarter. Sales totaled $802 million, versus $839.9 million a year previously, and comps increased just 1.4 percent. There were also declines in operating income in the quarter.

With “Want It,” marketing is taking its cue from the buyers. “This is a presentation to really support the merchants,” said Terron Schaeffer, senior vice president of marketing for Saks Fifth Avenue. “We are crafting a promotion based on what merchants believe in. It’s about trends and key items in terms of colors, silhouettes and fabrications.”

Among the products to be spotlighted are:

“Want It is clearly a very important part of August and September deliveries,” said Frasch. He declined to specify the investment in the campaign, but noted that it runs across all Saks price points. Two galas are being planned, at the Fifth Avenue flagship and the Beverly Hills store, for the night before the official kickoff.

Visuals for the campaign are being supplied by Michael Roberts, fashion and style director at Vanity Fair, who created the 20 collages that will be incorporated into the advertising, shopping bags and catalogues.