Sam Rockwell: Sam I Am

By Vanessa Lawrence and Alex Badia on October 18, 2010
View Slideshow 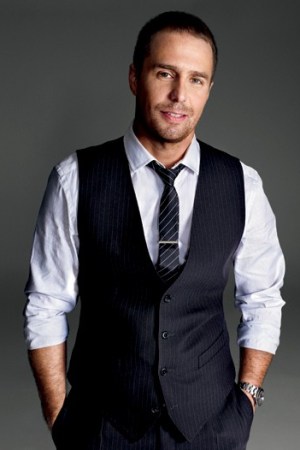 Anyone who’s seen Sam Rockwell in wacky, off-kilter cinematic mode would be surprised by the seemingly calm, serious-looking individual who settles into a Modernist red chair in New York’s Milk Studios on a windy afternoon. Dressed in a tan corduroy jacket, worn-in Levi’s and blue suede skater Pumas, and wearing artsy, thick-frame specs (“I’m slightly nearsighted”), Rockwell is both unassuming and all business, his expression saying, Let’s do this thing. Even when he begins to chat about his latest project, Conviction, out this month, it is in a slow, sleepy speech filled with long pauses, few smiles and little to no wisecracks.

This story first appeared in the October 18, 2010 issue of WWD. Subscribe Today.

But there are hints that Sam Rockwell the person is not completely devoid of some real-life idiosyncrasies: In place of more mundane coffee, he takes occasional slugs from a Liquiteria lemonade–cayenne pepper concoction called The Killer; he sports a tattoo on his right arm of a rooster on a noose (or as he puts it “a hanging cock—I got it very young, I went to a parlor in the Mission looking for a coming-of-age masculinity sort of peacock thing, and I went with the rooster”), and a calf injury from his recreational boxing activities has him stretching at fairly regular intervals in a manner that borders on hypochondria. (“Sorry, I’m being a bit neurotic,” he apologizes.) And then there’s his 1995-worthy flip phone, from which he sends snail mail–paced texts—he refuses to partake in e-mail.

“Sam is a very special individual. He’s pretty eccentric, he has to walk through life his own way,” says Conviction director Tony Goldwyn.

In Conviction, written by Pamela Gray, Rockwell tackles the true story of Kenneth Waters, a troubled New England native who was wrongfully convicted of first-degree murder in 1983. He spent 18 years in prison while his sister Betty Anne Waters (played by Hilary Swank), a single mother, put herself through law school and fought to prove his innocence.

“I think he was a good-hearted guy, a tough guy, very charming, the life of the party, but I think he had a temper and…he probably developed some emotional issues he hadn’t quite worked out,” says Rockwell of Kenny, who along with Betty Anne was the product of a series of foster homes and even juvenile jail. “You know, he’s a street kid, he’s from a bad background, so it’s a different etiquette, a different rule book for social graces. I think the childhood informs everything.”

The real-life Kenny died six months after his release from prison in 2001, but Rockwell had plenty of material from which to draw, including stories from Betty Anne, who was on the film’s set; audiotapes from prison and oral histories from relatives (he was also reading Jack Henry Abbott’s In the Belly of the Beast at the time). What emerges is a performance that is at once sympathetic and ambiguous: Rockwell refuses to temper Kenny’s anger and roughness for sentimental currency.

“What we needed in this role was a kind of duality, an actor whom you are charmed by and fall in love with and has a sweetness and a bigheartedness and has a volatility and madness. Sam has that madness beneath the surface…and he’s very sweet,” says Goldwyn, who jockeyed for the actor to play the part. “Sam comes in having thought deeply about all of it and then sees what happens and goes in really drastically different directions on the set. He likes to explore every possible corner…He’s very free.”

That spontaneity certainly came in handy when a reel containing a day’s worth of the film’s most difficult scenes was ruined and had to be reshot. “I said, ‘Guys, I have some tough news,’ ” recalls Goldwyn. “Sam starts moaning and falls to the ground, grabs his stomach; Hilary started to cry.” “The first time Sam did it, it was incredible,” recalls Swank of the reshoot. “The second time I’m pulled out of my character and I’m saying, ‘This is Sam’s Academy Award moment. What’s my line? Don’t ruin his Academy Award moment!’ [At the end] the camera operator puts down his camera and he’s crying; all around the monitor everyone’s crying.”

Rockwell’s performative power is a mix of genetics and intensive training (more on that later). The 41-year-old was born in Daly City, California, to two actor parents. When he was five, they split up, his mother moving to New York to pursue her career, his dad dropping his to raise his son in San Francisco in a peripatetic childhood that had them living in random hotels and apartment buildings.

“We lived on Eddy Street in the Tenderloin, in a very cheap dive hotel….We lived in the Castro. I met Harvey Milk before he was a big deal. I was like, I don’t know, eight?” says Rockwell.

When he was nine, his dad remarried, became an organizer for the printing union and union rep for the supermarket clerks, and Rockwell “lived a pretty middle-class existence.”

“I wasn’t a tough kid, but I knew a lot of tough kids. I got into trouble, but nothing really big: smoking pot, I got arrested, but it was just for buying beer with a fake ID. I did a little shoplifting, like in grocery stores and stuff, just like salami and cheese and potato chips and alcohol, usually, just typical kind of bulls–t,” says Rockwell.

He did his first play, Joan Crawford’s Children, at the age of 10, opposite his mom at a theater on East Fourth Street in New York, and later attended the San Francisco School of the Arts, dropping out before graduation. (“I was kind of flunking everything. How do you flunk acting?”) He enrolled in Urban Pioneers, an alternative, outward-bound program “where all the stoners and f–kups went” (he says he wasn’t one of them), regained his focus and got a diploma via ALTA. Then it was straight to New York to pursue acting.

He had a string of the requisite odd jobs (busboy, bar back, burrito delivery guy) and TV commercial work (his last was a Miller beer spot opposite Angie Harmon) before he landed a part in a 1998 film, Lawn Dogs, which paid him “like 60 grand.”

Rockwell credits his time studying the Sanford Meisner technique with William Esper early on in New York with pushing his acting to a different level. He launches into a philosophical monologue when discussing it.

“I realized it wasn’t just a whim. I think [the way] I had been brought up, I took for granted a lot of the stuff that I knew and the tricks I had learned from my mom or other actors. I was naturally adept at acting, and I had learned how to film act very quickly. But [with] Bill Esper I learned there’s a lot more to it, there’s a craft if you really want to be an actor like a Robert Duvall or a Meryl Streep. That’s what I always aim for,” says Rockwell. “I think there’s not enough of that sort of respect for apprenticeship for being an actor. People just want to become famous so quickly and so young and nobody really gives a s–t. But I do. So that’s my self-righteous spiel about acting.”

It appears to have served him well. In 2002, George Clooney handpicked him (over other, more marquee names) to star as Chuck Barris in Confessions of a Dangerous Mind, a film that made him a highfalutin household name. He has since done everything from indies like Choke and Moon to more mainstream fare like Frost/Nixon and Iron Man 2. And he has the actress girlfriend Leslie Bibb, 36, whom he’s been dating for a few years, quietly, for the most part. (They divide their time between Los Angeles and New York.)

“She has all these old sexy pictures that they bring out. And she has a lot of new sexy pictures. Basically, there’s a lot of sexy pictures of her out there, so often they’ll bring them up,” says Rockwell, looking not at all bothered by this. “She’s hot, f–k it, there you go.” As for fame—the kind that gets you stopped on street corners and tends to elude actors who rack up adjectives like “quirky” and “off-beat”—Rockwell seems to be at peace with his career thus far (that said, Conviction is already garnering him Oscar buzz).

“I only care [about it] if it helps me get good parts. Otherwise, I don’t know if I give a s–t anymore. Maybe I did at one time….They want to label you as a type of actor— you’re a character actor, you’re a leading man, or you’re an antihero, and maybe you can be all of those things—but nobody wants to hear that, because they’re trying to sell a product,” says Rockwell, who just finished shooting Jon Favreau’s Cowboys and Aliens. “But that being said, it’s fun if you can have a career as an actor. It’s a f–king miracle.”