Moore From L.A.: Could San Francisco Become a Fashion Capital?

Fashion-tech start-ups Stitch Fix, Everlane and Rothy's are coming of age, and a new creative class is starting to emerge in San Francisco.

It’s not a media hub like New York or a manufacturing center like L.A., but it is a hotbed of fashion disruptors following historic blue jeans maker Levi Strauss & Co. and casual Friday pioneer Gap in changing the way people dress and shop.

What sets many of San Francisco’s fashion brands apart is that they are direct-to-consumer, mission-driven and digitally enabled from inception to tackle industry challenges, including sizing and transparency. Many are also led by female chief executive officers or creative directors designing into a polished, functional aesthetic that’s resonating in this new feminist era.

Now that these start-ups are coming of age (and setting $1 billion-plus public offerings), they are attracting more talent, including designers, stylists and editorial directors, and a new creative class is starting to emerge in San Francisco.

Everlane has ambitions to be the next Gap, only with a transparent supply chain. ThirdLove, the size-inclusive, female-first lingerie maker, is taking on Victoria’s Secret. Cuyana is selling attainable luxury ready-to-wear and leather goods with the mantra “fewer, better things.” Meanwhile, fashion-tech brands Stitch Fix and online resale giant The RealReal are reshaping the shopping experience.

“We’re not a fashion-forward city, but that’s OK. We’ve dug into creativity through innovation and that’s just as beautiful,” said Erin Lowenberg, the Gap-trained creative director of Rothy’s, the brand of colorful-chic, washable knit shoes made of recycled plastic bottles that did $140 million in sales last year, and is planning five new stores this fall.

“We’re coming from a place of solving a problem, not a whim,” added Sonia Martin, vice president of men’s and women’s design at Everlane, which is expanding its offering of minimalist-chic basics to include more tailoring, dresses and skirts.

Martin moved to San Francisco in October after a career spent in New York and L.A. designing for Gap, Juicy Couture and Abercrombie & Fitch. At first, she didn’t want to relocate to the Bay Area, which has the highest cost of living in the nation, but she says Everlane’s purpose won her over: “It’s responsible shopping, that’s what brought me here,” she said of the brand, which has pledged to go plastic-free by 2021. 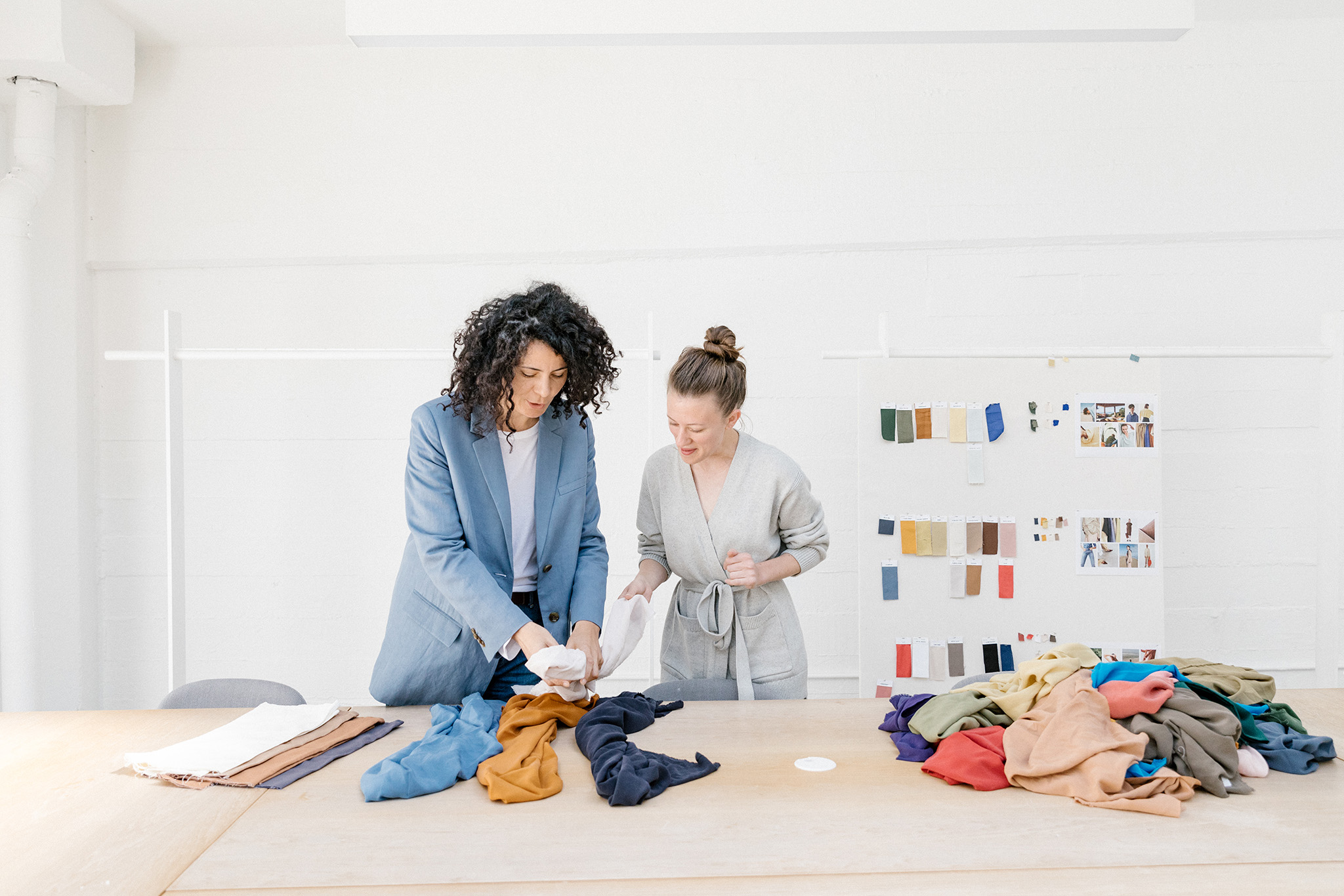 Everlane’s Mission District headquarters is more democratic than “The Devil Wears Prada,” with weekly communal lunches and fireside chats for its 150 employees.  “That’s something I haven’t had a lot of exposure to at other brands,” said Martin, who supervises a team of 13 designers. “Recruiting has been easier than I thought because a lot of people want to be part of Everlane. Do they want to live in San Francisco? Maybe, maybe not. But I can have that conversation because it was my experience,” she said, adding that she recently hired a head of denim design locally, a head of women’s knits from L.A. and is scouting for a design director of women’s wovens. The team is working on developing new categories and infusing Everlane’s offerings with “more energy” (think cocoon coats and sleeve volume for fall), if not necessarily “fashion.”

“It’s about how things are produced or why, that’s the stake in the ground that’s different than New York start-ups,” said Heidi Zak, a veteran of Aeropostale and Google who in 2013 cofounded the bra company ThirdLove with half-cup sizing, tech-enabled fittings and a feminist outlook that translates to its headquarters at the former Beats by Dre office in Cow Hollow, where conference rooms are named after prominent women like Ruth Bader Ginsburg. Zak just raised $55 million to explore brick-and-mortar, extend to 78 size offerings, and up the design quotient (the brand recently introduced an eyelet lace balconette bra from A to I cups.)

While tech-fashion brands Stitch Fix and the RealReal are joining the unicorn club, consumer fashion start-ups are also securing funding and expanding product. And they are beginning to change the retail landscape in San Francisco and beyond as they go from digital to brick-and-mortar stores. 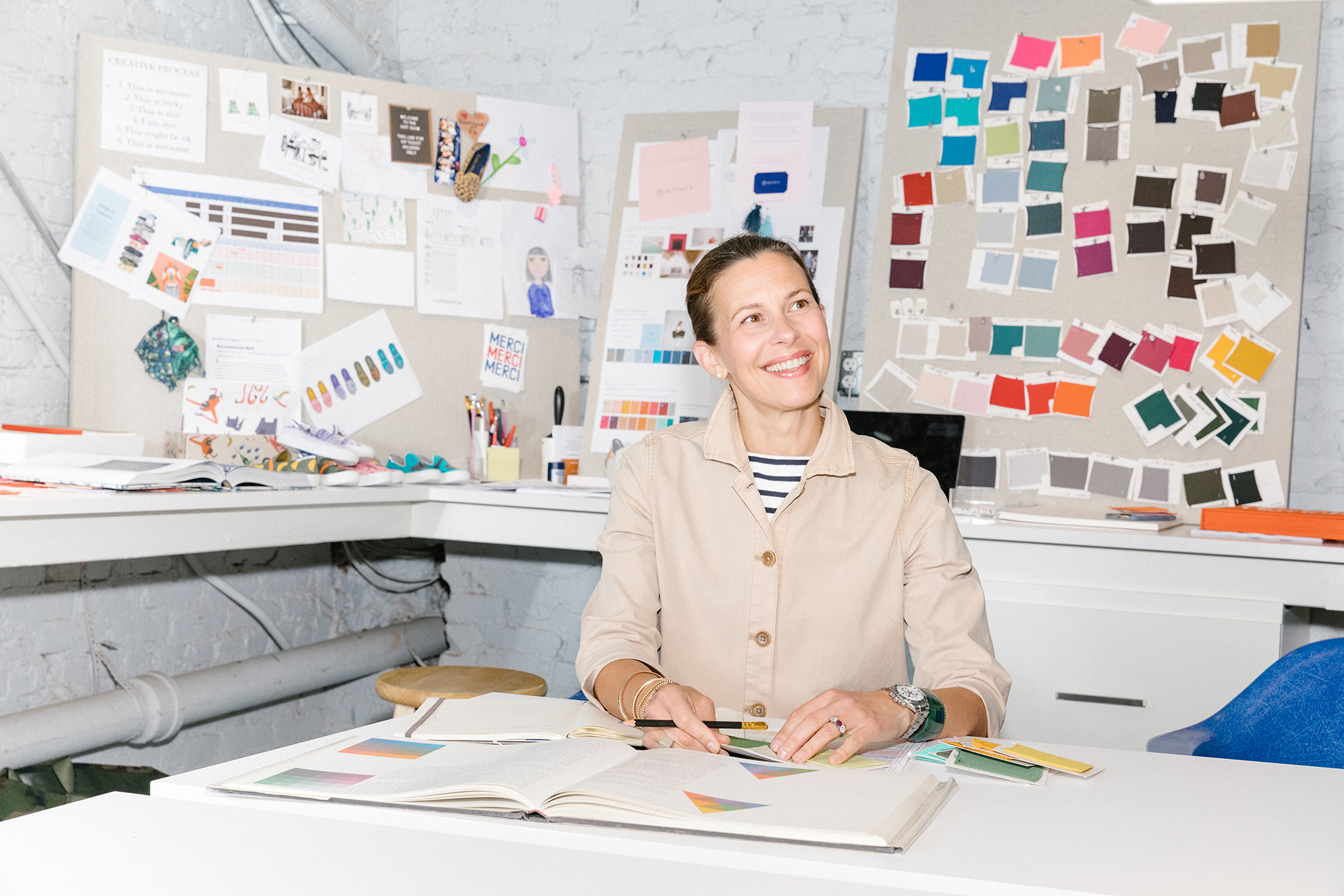 In February, Cuyana raised $30 million in Series C for product and retail expansion, including opening stores internationally (adding to existing locations in New York and L.A.). Selling priced-right (mostly under $500), minimalist-chic, ready-to-wear and no-nonsense, Made in Italy bags, Cuyana reached profitability in under six years and has 100 employees and counting. Although cofounder and ceo Karla Gallardo doesn’t see San Francisco as a fashion community with a shared common language yet, she thinks there’s potential. “I look at recruiting as a pointer, and the inbounds we have from other cities, great talent that work at older luxury brands, is so much stronger than it’s ever been, and that’s an exciting sign. The brands being built here are real, they’re growing and they’re not going away,” said the Wall Street veteran, dressed on a recent morning at the Geary Street headquarters in jeans, heels and the brand’s on-trend, dandelion-yellow, balloon-sleeve blouse.

Birdies, the slipper-shoe brand loved by Meghan Markle, raised $8 million in Series A funding in January. “If we tried to do something high-fashion, it wouldn’t resonate. We don’t sacrifice comfort; everybody knows that about San Francisco,” said the brand’s creative director Jacqueline Nasser, a former New York-based fashion editor, during a visit to her boudoir-style boutique on Union Street. “As someone who lived through the ‘Sex and the City’ era, the thought of going into Condé in flats or slippers was horrendous back then. But now, it’s so different, and we think the market could be huge,” she said, adding that the brand is planning stores for New York and L.A. in 2020. 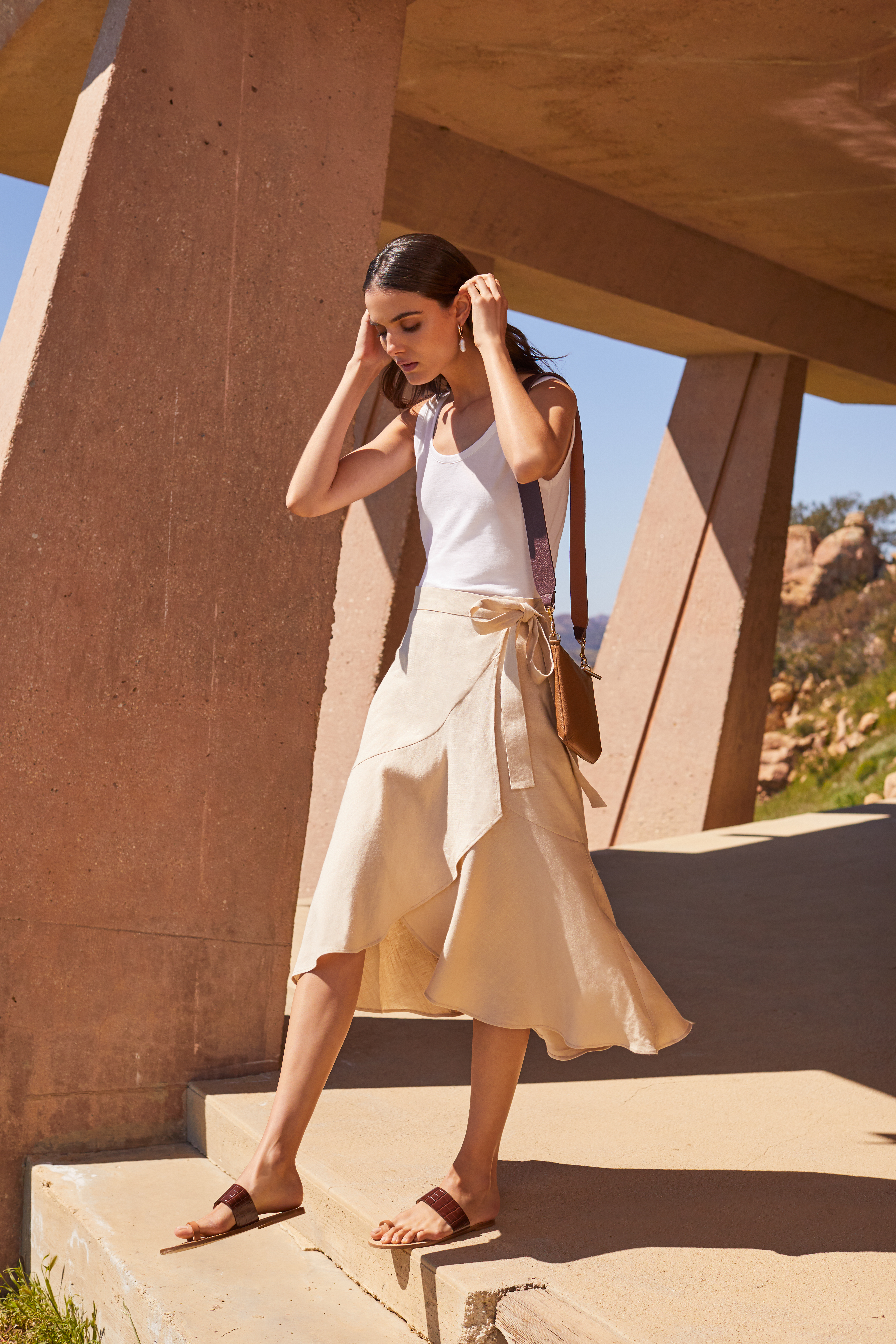 On tony Maiden Lane, RE:Store is slated to open later this summer bringing together 60 digitally native brands under one roof across the street from Hermès and next door to San Francisco-born Argent, a Millennial women’s suiting brand started by a former executive at Cisco Systems that’s found favor with Hillary Clinton and Hollywood celebs. In trendy design district Jackson Square, sustainable footwear brands Rothy’s and Barack Obama-approved AllBirds both have their HQ and stores near outposts of Isabel Marant and Zimmerman. And a stone’s throw from Birdies on Union Street, Modern Citizen, the desk-to-dinner apparel collection started five years ago by two Stanford graduates, has opened its second San Francisco store.

“A recurring theme is value, not only values in the businesses, but having value in the product so it’s not thousands and thousands of dollars,” said Jessica Lee, who cofounded Modern Citizen with fellow Stanford graduate Lizzie Agnew in 2014 on the idea of dressed-up basics at prices less than $500. After raising a small round earlier this year from female investors including Opening Ceremony’s Carol Lim, and Sephora’s Deborah Yeh, the brand is opening its third store this summer in Dallas, and beginning to hire senior management and marketing teams. 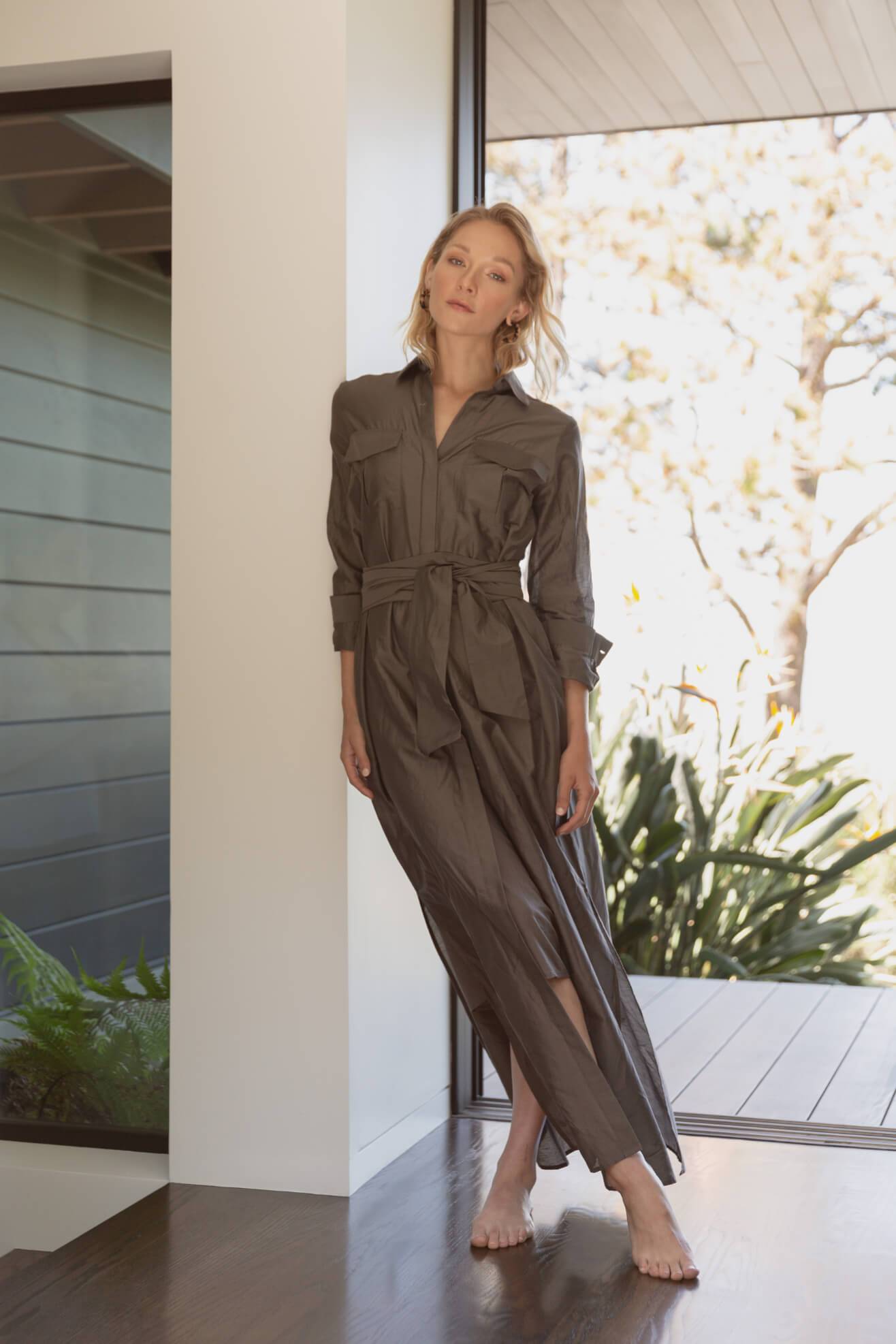 But recruiting remains a challenge, she said, and production has to be done elsewhere, in Modern Citizen’s case, in L.A.. Although there are several local fashion schools, most of San Francisco’s fashion start-ups “aren’t on students’ radar,” said Simon Ungless, director of the Academy of Art University School of Fashion, explaining that graduates still want to work in New York or Europe — or start their own, craft-focused labels.

ThirdLove’s chief creative officer Ra’el Cohen moved to San Francisco in 2000 to go to fashion school, after which she said her career prospects were pretty much limited to Gap, Charlotte Russe and Mervyn’s, where she began designing private-label lingerie. For her team at ThirdLove, she wooed a technical designer from Hong Kong, helping with relocation and visa costs for her family, and is also looking to New York. “I would love to send teams there to do recruiting events to turn the old guard onto the cool things happening out there,” said Cohen.

“You can do design in San Francisco, that wasn’t true seven years ago,” said Jessica Heren, founder of online social selling platform Stella & Dot, which sells apparel, accessories and jewelry (Ruth Bader Ginsburg wore a spiky collar by the brand in a 2018 official Supreme Court photo). She noted that Gap has moved all its operations to San Francisco, and that some other businesses, including her own, are following suit. 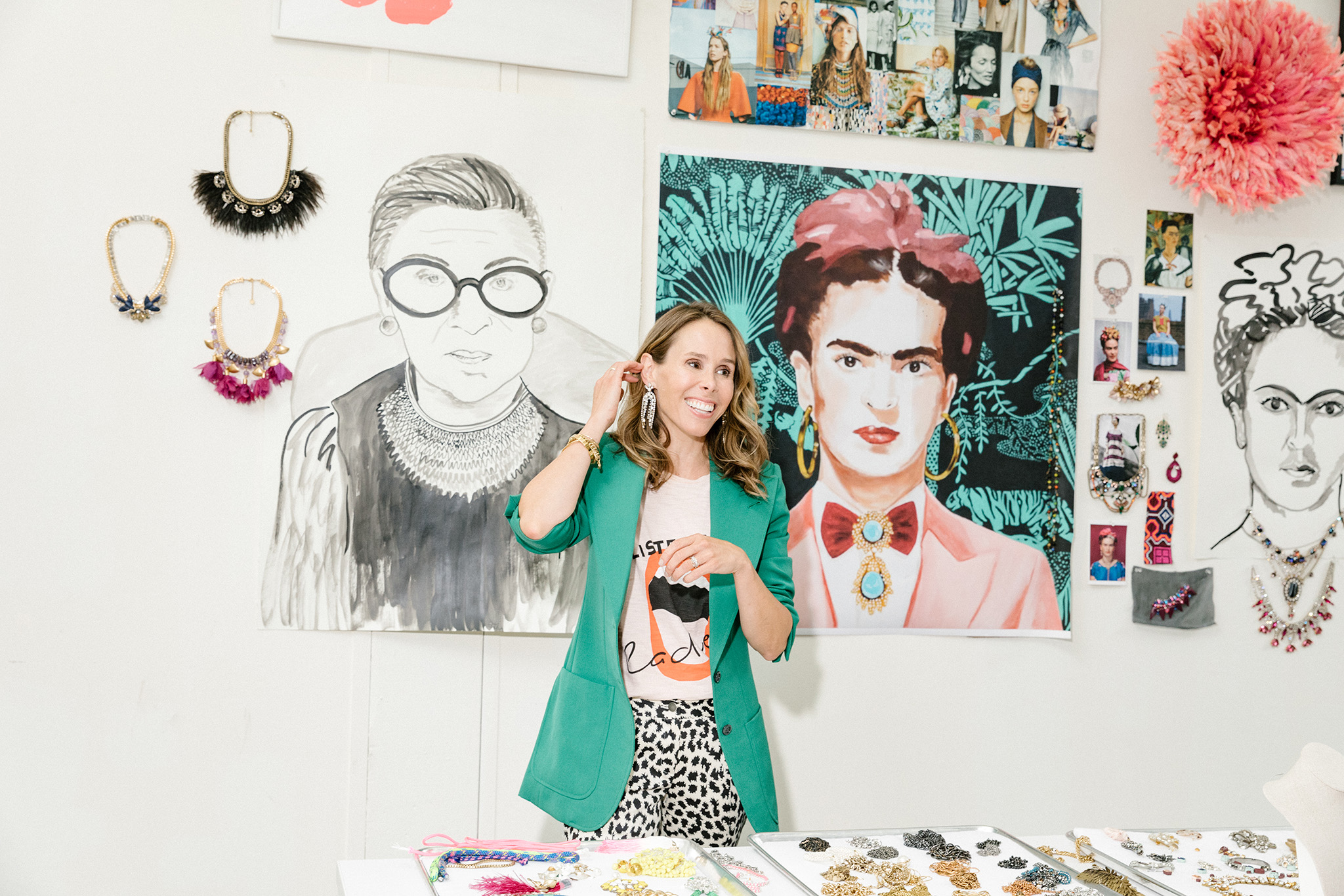 “When I first moved here from New York [in 2013], it felt like the major flow of inspiration was gone. Now it’s so much less of an exclusive, small group of people deciding trends,” said the brand’s creative director Blythe Harris, who recently closed her New York satellite studio altogether, and splits her time between Stella & Dot’s Brisbane headquarters and the art and design studio she keeps in a converted shipyard that is a creative hub for Serena & Lily cofounder Serena Dugan’s textile business, shoe brand Freda Salvador, and fledgling fashion line Très Nomad.

Despite the proliferation of new fashion brands and services, many professionals say its still tough to fight stereotypes in the Bay Area’s male-dominated, uniformly dressed tech culture.

“There is the general sense that you aren’t smart if you care about what you look like,” said Stitch Fix’s Sammons, drawing a distinction that inside her office, the culture is such that people often compliment each other on what they’re wearing, at least the creatives do, if not the engineers.

The area’s geography doesn’t help. Like L.A., San Francisco suffers from being a collection of far-flung neighborhoods, with many people moving further out of the city because of skyrocketing housing costs. Craving creative community, Stella & Dot’s Harris initiated a monthly meet-up, which on a recent evening at her Rita Konig-designed home in leafy Mill Valley included Sausalito-based designers from Freda Salvador and Serena & Lily, as well as former Condé Nast and Hearst magazine editors now at Stitch Fix and start-ups like Careste, which sells on-demand custom shirts for women. 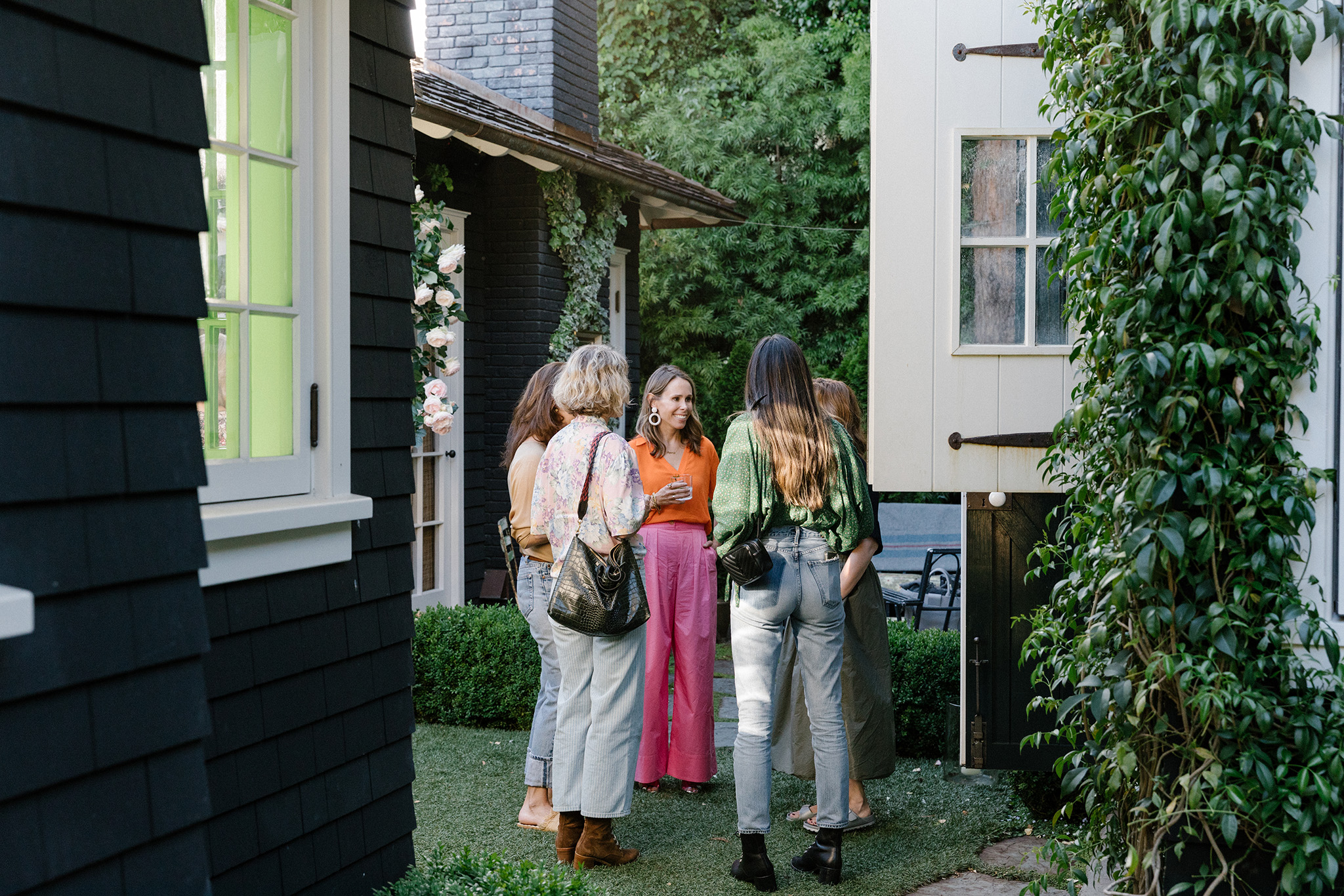 Cocktail chatter covered nostalgia for working on glossy editorial shoots, the rise of micro-influencers, and feeling out of place wearing color and print in San Francisco.

“Moving here was a challenge for me, especially when a woman at my kids’ bus stop asked one morning, ‘What are you dressed for?’” said Calgary Avansino. A British Vogue contributing editor dressed for cocktails in a vintage pink paisley dress, she moved to San Francisco to work in tech and is now the ceo of GlamCam, an app that aims to be the Twitch of makeup.

“I literally had the same experience. Someone at my kids’ school said, ‘You are so fancy!” laughed Harris, also wearing pink — pink pants by Rachel Comey. “It’s a great place to live if you’re sure of yourself.”