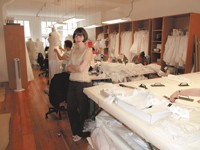 SAN FRANCISCO — Apparel manufacturing here has withered as in many cities, but at least one area continues to thrive: the bridal sector.

Charging brides $2,000 to $25,000 for their gowns, a dozen local designers — most of whom are relative unknowns beyond the Bay Area — are visible examples of San Francisco’s remaining apparel sector. According to city statistics, there are about 4,000 local garment workers, down from 15,000 at the peak a decade ago, when it was still common for companies like Gap to place some orders locally.

The bridal designer ateliers have sewing rooms employing two to 25 workers. Many are prominently tucked above boutiques such as Hermès and Marc Jacobs on tony Maiden Lane, or elsewhere in the Union Square retail district downtown. Others opt for hard-to-find industrial-chic lofts just a mile away in the South of Market district — or SoMa, as the locals call it. One industrious designer has set up in a converted movie theater alongside the single-room occupant hotels in the Tenderloin, the city’s skid row.

Part of the reason for the bustling ateliers is that California brides aren’t skimping on expenses. San Francisco brides this year will spend an average of $3,057 for their attire, and a total of $44,500 on the entire event. This exceeds the average price tag nationwide of $1,841 for bridal gowns, and $26,800 for the whole wedding, according to the Wedding Report, a newsletter that tracks industry trends.

“The quality of the local designers is really high end. Their tailoring is impeccable,” said Nilka Shan, owner of N Events in San Francisco, who often refers brides to local designers and has selected one, Jinza Jin, for her own nuptials. “I don’t want to get a cookie-cutter look,” said Shan. She also hated the idea of having “to take a beautiful gown like a Vera Wang and change it” in order to get what she wanted: a “mermaid style” silhouette with full chapel train, for which she’s paying Jin $3,500.

Jin, who initially immigrated to the U.S. from China to work for a San Francisco garment contractor, expects to exceed her usual 80- to 100-gown-a-year business this year, since 70 orders already have been placed — all since she relocated to a central location on Union Street in posh Pacific Heights. She’s also picked up some evening gown business from the ranks of the city’s well-dressed performing arts patrons.

Except for a few local bridal boutiques — which don’t sell San Francisco designer gowns — there was little competition in the city of 800,000 people to outfit area brides. However, a year ago, Neiman Marcus on Union Square opened a couture bridal salon after not having one since the Eighties, and Saks Fifth Avenue nearby branched out by offering designers beyond Vera Wang.

“We tend to get a lot of the daughters of loyal Saks customers,” said Tina Kearney, manager of the bridal and couture salons at Saks’ Union Square store. New designers to Saks include Ulla Maija, Kenneth Poole for Amsale and Oscar de la Renta. Kearney, like others, said the local bridal gown market is competitive and local designers are clearly part of the mix.

While Saks doesn’t carry bridal gowns from local designers, it does sell long-time San Francisco designer Lily Samii’s mother-of-the-bride gowns, in addition to her eveningwear. Independently, Samii’s clients have asked her to design one-of-a-kind wedding gowns. “Brides come to us when they have something in mind,” said Samii, who has a salon on Union Square.

Another designer, Christina Hurvis, has found many brides through word-of-mouth recommendations and Google advertising. Her 4,000-square-foot rented loft in SoMa is located above a cash-and-carry store and is large enough for fashion shows with audiences of 200. The slightly sloping cement floor is painted chartreuse — a reflection of her nontraditional style.

“I’m so in love with what I’m doing right now,” said Hurvis, who started making bridal gowns four years ago after tiring of doing her signature jersey sportswear collection in New York. Hurvis designs 30 to 50 wedding gowns a year, about 75 percent of her total business, and uses two seamstresses.

Her gowns can go as high as $6,500, but the average Hurvis design is $3,500 and includes six fittings. One recent style is a slim-fitting, sleeveless, bias-cut champagne-colored silk gown with a soft pink vent “you can see when the bride twirls,” said Hurvis, who honed her skills fitting models for Paris runway shows. Accenting a side of the bodice is a large bright red-and-pink embroidered flower that Hurvis had made in Oaxaca, Mexico.

On another SoMa alley, designer Colleen Quen opened an office in an industrial laundry dating back to 1908. She previously worked in the city for labels such as Eileen West, and is currently working on seven wedding gowns with her staff of two seamstresses.

In business for six years, Quen said brides often seek her out because her gowns, with a little altering, can double as eveningwear. She designs 20 to 30 wedding gowns a year, and makes another 70 evening gowns or party dresses. Her best-selling wedding dress is a strapless gown with a white butterfly print, which starts at $4,000. Another popular strapless bridal design has a large hand-painted flower print, for $6,500. The most expensive wedding gown Quen has created was $23,000.

About 70 percent of the gowns Wang sells are her designs, but to further distinguish her business in an increasingly competitive local niche, she carries designers such as Italian Domo Adami or Jenny Packham of London.

“In the last five years, there’s been a huge upswing in the number of bridal gown designers here. Everyone wants a slice of the pie,” said Wang, whose gowns start at $1,900 for a simple design and go up to $7,900 for a trumpet-shape gown of Chantilly French lace with a hand-pleated organza panel in the back forming a slight train. Wang, who started her career as a merchandiser for Gap, Levi’s and I. Magnin, ends each sale with bustling lessons for brides and bridesmaids, and makeup tips.

Across Maiden Lane, Parsons grads and partners Lynn Rosenzweig and Ivana Ristic own and run Ginger’s, which also carries their bridal label, Ristarose. The collection bills itself as “the modern, minimal alternative to the classic ballgown,” Rosenzweig said. The two design roughly 50 dresses a year and sell their label to 10 other stores.

One $4,800 fitted French lace Ristarose gown is hand-stitched with 100 silk-finished buttons down the back. Details like this are what Rosenzweig likes to emphasize with customers, who, she said, typically comparison shop among local designers and retailers. “The business is the same or better for us, but we’re having to work harder,” she said.

Establishing a national presence through 30 specialty stores, setting up an interactive Web site and maintaining a busy local bridal clientele is how designer Amy Kuschel’s gown business has evolved in the last three-and-a-half years. That’s when she moved her wholesale business from a suburban warehouse to a fifth-floor perch on Grant Avenue, around the corner from Maiden Lane.

Kuschel has eight seamstresses, who turn out 500 gowns for local brides and 1,500 for retailers across the country. Brides at any location, including those browsing online, typically have a collection of 20 gowns from which to choose and each style can be altered. Retail prices range from $1,500 to $6,500.