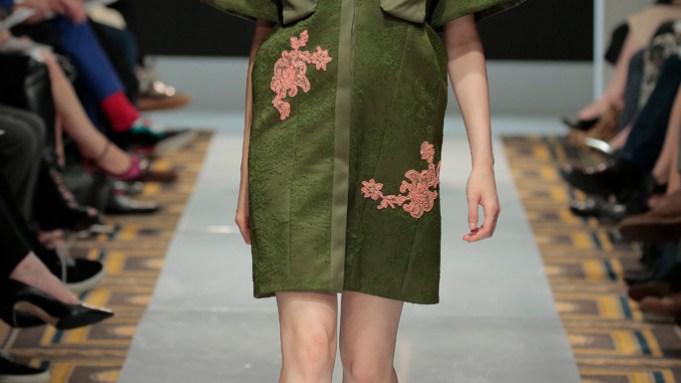 The Academy of Art University staged its Graduation Fashion Show here on May 14 with a vivid and highly original selection of 135 looks.

Clothes and accessories were created by 39 students graduating with degrees in fashion design, jewelry and metal arts, textile design, knitwear design and men’s wear design. The fast-paced show was directed by Simon Ungless, executive director of the School of Fashion, which was founded in 1989.

The show opened with a dozen polished and retail-ready looks, a series of collaborations between the school’s textile, jewelry and knitwear designers. The concept was to celebrate the 30th anniversary of Hervé Léger for the BCBG Max Azria Group, and move the legacy of Leger forward into the future.

“In the fashion department, we encourage collaborations among all of the arts — because in the world of fashion ateliers, all fashion design is a continual dialogue and it’s always truly collaborative,” said Ungless. “Fashion design, we remind students, is a dialogue, a process. We emphasize that both individual expression and collaboration mirror the reality of our industry.”

The school is also instructing students in traditional crafts and techniques to ensure that classic skills such as hand embroidery, hand-knitting, painting and beading are not lost in the onslaught of laser cutting and computer-generated design and photo manipulation, said Ungless.

Ahead of the show, student portfolios of textile designs were presented. Lauren Lusby focused on hand-beading, with traditional Lesage techniques deployed into vivid abstract patterns on a muted woven wool background. Anna Metzel showed Francis Bacon-inspired prints in soft blurs of mauve and orange that had a fresh, contemporary look.

At a ceremony earlier, Academy of Art University awards were given to industry leaders and an alumna of the school, and scholarships and internships were announced.

The Award for Outstanding Contribution to the Fashion Industry and Fashion Education was given to the CFDA, represented by Lisa Smilor, executive director, and Sara Kozlowski, senior manager.

The Distinguished Alumni Award went to fashion designer Ryan Roche, who is producing her own line in New York. Roche, who has produced her luxurious handcrafted cashmere knitwear with women’s collectives in Katmandu for the last decade, spoke of her relief that following the recent earthquakes in Nepal, all of her knitters are safe and her production was not destroyed.

“I’m now working hard to keep deliveries of my fall-winter collection to Barney’s New York and other clients,” said Roche. “I’m totally committed to working with these knitters. They need the work more than ever.”