At the same time, the school awarded honorary doctorates to Angela Missoni and her daughter Margherita Maccapani Missoni.

By Diane Dorrans Saeks on May 9, 2014
View Slideshow 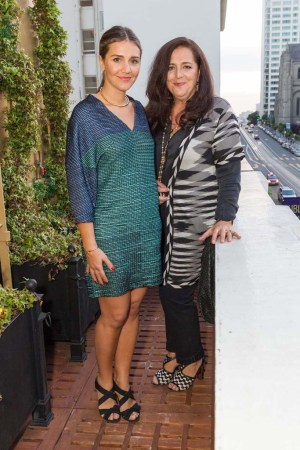 Dr. Elisa Stephens, president of the school, founded in 1929, awarded the honorary degrees to the Missonis. (Angela Missoni is the creative director of the Italian fashion house, and Margherita Missoni is the brand’s ambassador.) Angela Missoni’s parents, Rosita and Ottavio, were presented honorary doctorates by the school in 1997. This is the first time the academy has awarded doctorates to three generations of a fashion family dynasty. Rosita attended this year’s ceremony, along with nine members of the Missoni family, including grandchildren, cousins and husbands.

“I did not complete high school. I discovered later that I’m dyslexic. I went to work with my parents at the factory when I was 18, so it is exceptionally exciting for me to go straight to a doctorate,” said Angela Missoni. “My family was my university. My parents were fearless and risk-taking. Now the company is evolving, while remaining true to our vision of craft.”

Her daughter, Margherita — who has expanded the brand into fragrance and is immersing the company in social media — noted in her acceptance address that the family’s knitting factory north of Milan is still the center of their life. “We work hard and every day feels like fun, and we always have Nonna Rosita as our inspiration,” she added, in tears, as Rosita dabbed her eyes. “I’m so humbled to receive this award with my mother, who is my boss and my mentor.”

At the end of the fashion show, the Missonis selected graduate student Okudaira for a design internship at their factory in Sumirago. Awards and internships were also given by Abercrombie & Fitch, the CFDA, Surtex, Supima, BCBG Max Azria and Studio Berçot in Paris.