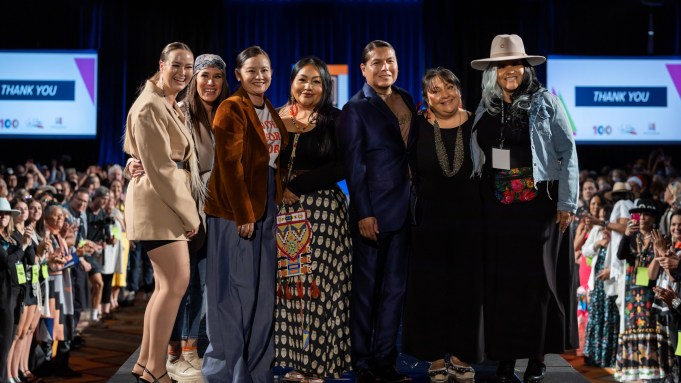 The first Santa Fe Indian Market contemporary Indigenous fashion show in 2014 was held in a public park with four designers, a $200 budget and a U-Haul for models to get ready.

“What’s changed is people want to see more of it, which is great. What has remained the same is these are amazing talents and designers who are diverse in all their collections and personalities and creativity,” said art historian Amber-Dawn Bear Robe, who curates and produces the runway shows and dreams of creating an Indigenous fashion week in Santa Fe.

“It’s definitely been gaining interest over the years,” said Dine special occasion wear designer Orlando Dugi, who has been featured in every show and who’s based in Santa Fe.

But it hasn’t been without struggles.

“Especially when I started, because I was doing special occasion wear…I was not native enough for some, and too native for others,” said Dugi. “If someone saw my collection on the runway, they wouldn’t necessarily know I was native until they saw my face. And from the native side, it was, ‘who’d want to wear that, that’s not traditional or what our people wear.'”

Patricia Michaels, the first native designer to appear on “Project Runway,” in 2012, had a similar experience when she started making apparel 35 years ago.

“I come from Taos pueblo, the oldest living village in the U.S..,” said Michaels. “When I started, I had protesters saying my stuff wasn’t native enough because I use silk, a non-native material. People didn’t understand the contemporary movement.”

That’s changing, thanks to a new generation of designers gaining visibility inside and out of their communities through fashion events and markets in Canada and the U.S., on social media, and in native-produced shows like “Rutherford Falls.”

Indian Market, the largest and most prestigious native art market in the world, celebrated its centennial over the weekend, featuring the work of more than 800 juried artists, representing 250 Nations in traditional pottery, basketry, jewelry, painting, sculpture, wood carvings, and textiles. But fashion was a bigger focus than ever.

Walking the runway were many of the Indigenous Hollywood stars who are increasing representation onscreen, including the first native superhero Midthunder; Woon-A-Tai (recently signed by IMG), and “Dark Winds” stars Zahn McClarnon, Jessica Matten, Kiowa Gordon and Eugene Brave Rock.

In the seats, in addition to collectors, curators, arts patrons and local celebrities like Sazon’s James Beard Award-winning chef Fernando Olea, there was a fashion industry contingent.

The designers had wildly different approaches, from street to sci-fi to political. Mohawk designer Skawennati put signs emblazoned with messages such as “Resistance is Fertile” and “Water is Life” in models’ hands while showing her “calico camouflage” pieces, while others had minimal or no references to traditional culture.

With so many differences, is it even useful to have a native fashion show anymore?

“Well, it’s what we’ve got now,” said Jamie Okuma, a leading Indigenous designer and artist who lent her work for the Costume Institute’s “In America: A Lexicon of Fashion” exhibition, despite initial fears she was a token.

A member of the La Jolla band of Mission Indians, she showed gorgeous silk dresses and robes in prints based on photos of flowers from her reservation in North San Diego County, a black-and-white ribbon gown riffing on traditional native dress, and a creamy organza pannier gown with caped sleeves and tonal floral embroidery that belongs on a red carpet.

With a dedicated fan club of collectors, Okuma knows if she wanted to live in L.A. or New York she could grow her brand beyond the one-woman operation it is now. But she prefers to keep it small and special.

“The internet has made it so that you don’t have to move, and it’s great my kids can see they can do what they want from anywhere,” said the designer, who drops pieces for sale on her website as she makes them.

What all the runway designers do have in common, however, is a respect for the earth and the value of community, a sustainable approach through materials, local or small batch production and contained growth. All of that is incredibly timely as part of the greater fashion industry discussion, even if native designers are still struggling to be seen.

At the weekend market, which drew more than 150,000 visitors, their booths were some of the most popular, especially among younger shoppers picking up sundresses, hoodies and scarves.

“Maybe you can’t afford a $30,000 pot but you can afford a $250 piece of fabric that’s been adorned with culture,” said Kim Peone, executive director of Southwestern Association of American Indian Arts, which produces Indian Market and is looking to fashion to help secure its next 100 years. “If we don’t pursue that contemporary space, we will lose a generation.”

On the runway, Dugi debuted his first menswear collection nodding to gender fluidity with luxury pieces including high-waist palazzo tuxedo pants, tuxedo shorts, chunky knit sweaters and a hand-painted coat that could have come down a runway anywhere.

Look closer, though, and one could see the influence of a Dine creation story about two warrior twins given the gifts of lightning bolts and flint armor by the Sun to fight monsters on Earth. That informed arrow motifs, an armor-like diamond bubble knit pattern on sweaters, and the metal embroidered sun on the back of a coat made in collaboration with Dine painter Ryan Singer.

“We didn’t want it to be so literal and meaningful that it would offend Navajo people if non-natives wear it,” Dugi said, adding that he sourced his wool from local New Mexico sheep farms, and used local spinners and knitters. Starting at $750, all pieces are made to order.

By contrast, designer Lauren Good Day showed a contemporary collection that seems like it would explode were it to wholesale.

“I like to take old pieces, and more traditional work, and turn them into contemporary clothing,” said the Arikara Hidatsa Blackfeet Plains Cree from the Fort Berthold Indian Reservation in North Dakota, explaining that while traditional native ribbon dresses, used for ceremonial purposes, are not OK for non-natives, her graphic interpretations are. “Whatever I create and have for sale on my website and put on social media is for everyone…The originals, I keep for myself.”

Taking a multigenerational approach, aspiring clothing designer Melanie Leblanc and her jewelry designer “auntie” Catherine Blackburn, who are of Dene and European ancestry, collaborated on a wearable art collection spectacularly shown on models in dramatic bear jaw and a deer antler head gear.

“It was inspired by our grandmothers, and we incorporated community, having other Indigenous artists work with us, including cousins and moms, to make the show happen,” said Leblanc, who lives in British Colombia. “Catherine wanted to honor animals and the land, so you see the bear jaw harvested by her husband. Everything has a purpose.”

The road to representation

When it comes to being recognized by the greater fashion community, it’s been slow-going, especially in the U.S.

“The representation of Indigenous art period is on a much larger scale in Canada than it is in the U.S.,” said Bear Robe, the runway show producer.

“We’ve never had a nomination from the Council of Fashion Designers in 60 years,” said Deal, a veteran of Reebok and Puma. “We can’t end appropriation until we get more kids into fashion. Y’all know we got all the cultural wealth — it’s bursting out of us. But we don’t have a pathway into the industry.”

As part of the CFDA’s diversity and inclusion initiatives, executive director Lisa Smilor traveled to Santa Fe for the weekend’s events, meeting with designers and educators to listen and learn.

“The collections and point of view are strong, centered around a responsible and sustainable supply chain and strategic sales and distribution,” she said. “It’s clear that there is great opportunity for the industry to work together to create meaningful and impactful support and opportunities to assure that we see greater representation of Indigenous design talent on all rungs of the proverbial ladder going forward.”

“That would be good,” said Dugi, who showed at Style Fashion Week in New York in 2018. “We are American and we are designers, and I don’t know what it is that we’re overlooked and overshadowed…It’s great the CFDA is looking into it, that’s a start. It makes me happy they can finally see there isn’t just one certain way of native fashion.”

Also in town were 10 team members from Ralph Lauren, a sponsor of the “The Art of Indigenous Fashion” exhibition that opened Friday at the museum at the Institute of American Indian Arts. Acknowledging Native Americans as the origin of so much of its inspiration and storytelling, the brand has been present at Indian Market for the past five years as part of its Native American and Indigenous community engagement program, and was meeting with talent who might want to work as artists in residence.

Lady Gaga’s stylist Nicola Formichetti also attended both nights after stumbling upon Indian Market by chance during a weekend trip while on a break from touring with the pop star. He also reached out to designers via Instagram for meetings.

“I came here to enjoy the nature and the history, and It turned into a magical two days of meeting the local talents. I feel there’s something — I believe in energy — there’s something here,” he said, singling out an emerging Plains Cree designer, Jontay Kahm, whom he met at the museum exhibition, and who was actually inspired by Lady Gaga to get into fashion in the first place.

Kahm, who attended Marist College and is now a senior at IAIA, was accepted by Parsons School of Design but turned it down because there was no scholarship money. His futuristic designs are inspired by nature, Alexander McQueen, Iris van Herpen and Nick Cave’s sound suits.

“He takes inspiration from the culture but takes it someplace else, and that to me is what’s going to make this a destination for fashion,” Formichetti said, singling out a blue bird dress, crafted from 2,000 feathers, with a face mask covered in brooches, as being “made for Gaga.”

If she did wear it, that would be a full-circle moment for Kahm, 26, who sold five pieces for $1,000 to $4,000 each at a pop-up he had at the museum over the weekend. “It would be such a triumph for my community, my heritage and my culture,” said the designer.

The blue bird dress is on hold for Gaga.