The 39-year-old Frenchman has recently added fashion model to his main duties as Lagerfeld’s longtime bodyguard and personal assistant. 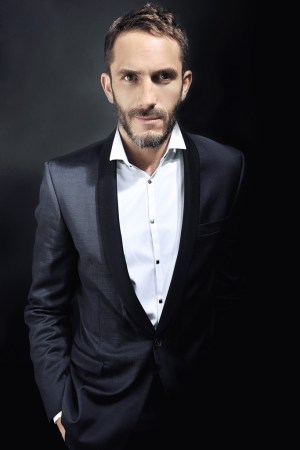 PARIS — Sébastien Jondeau’s first brush with Karl Lagerfeld involved a three-hour wait, a few minutes moving some 18th-century furniture, and a 500-franc tip — a handsome sum for a 15-year-old from the rough-and-tumble Paris suburbs.

It’s been a wild ride since to the front lines of international fashion for the 39-year-old Frenchman, who has recently added fashion model to his main duties as Lagerfeld’s longtime bodyguard and personal assistant.

Now the face of Lagerfeld men’s wear, Jondeau has also walked the Chanel catwalk at the German couturier’s invitation, and bared his bottom for a 2011 photo shoot for Pirelli.

An avid kickboxer who has fought professionally and trains intensively daily, the strapping Jondeau is sanguine about strutting his stuff.

When he made his runway debut in 2007 in a penguin sweater, everyone asked him if he was intimidated. “I said, ‘What the f–k? I just had five boxing matches and I’m going to be nervous just to walk in clothes?’” he recalled.

Indeed, little seems to rattle Jondeau, except a jangling cell phone — in case Lagerfeld is in need of him.

He takes the bodyguard job seriously, and is rarely more than a step away when the designer is in public. However comfortable Lagerfeld may be negotiating large crowds, the risk of harm requires extreme vigilance, Jondeau insisted.

“Maybe I’m too much around Karl, but I know he needs it. It’s very important,” he explained. “With him, people are not that aggressive. You just have to be careful with someone who could be crazy.”

Looking good is something Jondeau takes seriously, too, adjusting his attire to the occasion: Perhaps a “Karl Who?” parody T-shirt and shorts for a vacation stroll in Saint-Tropez, or a matching tailcoat for a royal wedding in Monaco.

He said the designer generously furnishes him with most of his wardrobe — from Dior Homme, Givenchy and Tom Ford, in addition to the Lagerfeld brand — but that he puts together outfits himself.

“The good thing with him is you have to have a style, you know? Not to look like everyone,” he said. “He’s very demanding, but cool at the same time.”

He has a weakness for watches — “It’s jewelry for men,” he shrugs — and sneakers, having amassed a collection of more than 100 pairs of Air Jordans from Nike, including rare ones sourced on international trips.

With his close friend and training partner, French welterweight champion Brice Faradji, Jondeau plans to launch an app called Interval Training Song, which will allow people to customize playlists in the rhythm of boxer workouts: three minutes of activity; one minute rest.

Lagerfeld said Jondeau stands out against a landscape of wan, scrawny male models, and appeals to the core 35-to-40 demographic his dressy line targets.

Asked what it’s like to shoot campaigns with Jondeau, the designer’s affection was plain: “It’s like you’re photographing your son.”