Adams is a Brooklyn-based artist known for works in painting and sculpture as well as performance, video and sound.

Derrick Adams – "Patrick Kelly, The Journey" – is on view through July 19.

The Savannah College of Art and Design is presenting “Patrick Kelly, the Journey,” which is an exhibition of work by the multidisciplinary artist Derrick Adams and is on view through July 19 at the SCAD FASH Museum of Fashion and Film in Atlanta.

Adams is a Brooklyn-based artist “who works in painting and sculpture as well as performance, video and sound,” SCAD FASH noted in a statement adding that his work “focuses on the fragmentation and manipulation of structure and surface, exploring the shape-shifting forces of popular culture on self-image.”

“‘Patrick Kelly, the Journey” emerges from Adams’ extensive exploration into the archive of the late African-American fashion designer Patrick Kelly (1954-90),” SCAD FASH stated. “A prolific and groundbreaking artist, Kelly was famously the first American to be admitted to the Chambre Syndicale du Prêt-à-Porter, the prestigious governing body of the French ready-to-wear industry. Adams immersed himself in the Kelly archive at the Schomburg Center for Research in Black Culture in New York, where he discovered a trove of correspondence, sketches, swatches, photographs and other memorabilia.” 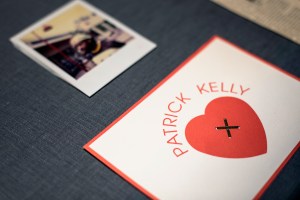 The exhibit draws upon a variety of archived material.  Photo courtesy of SCAD.

SCAD FASH noted that the archive also included a proposal for a book about Kelly’s life “written by his friend, the esteemed poet Maya Angelou, who delivered the address and received an honorary degree at SCAD Commencement in 1998.”

Alexandra Sachs: The title of your new exhibition at SCAD FASH — “Patrick Kelly, the Journey” — draws from a book proposal about Patrick’s life written by his friend, Dr. Maya Angelou. What parallels did you discover between your personal journey as an artist and Patrick’s?

Derrick Adams: I was already somewhat familiar with Patrick from seeing him in my sister’s fashion magazines when I was a kid. What I discovered through my research were glimpses of his thought process and certain gestures that lead to finished objects. Through other materials, I learned general similarities like both of us moving to more metropolitan areas for greater opportunities and remaining receptive to input and advice from leaders in our midst.

A.S.: The exhibition emerges from your exploration of Patrick’s archive at the Schomburg Center for Research in Black Culture. What role does research play in your creative process?

D.A.: Similar to many artists, research is a foundational element of what I do — I start with an interest and try to find out more. When I first saw a rarely seen image of Dr. Martin Luther King on vacation with his family in Jamaica, I became interested in creating images of black leisure life. Inspired further by seeing family members on pool floats, I Googled “pool floats” for inspiration and was unable to find images of black people on the floats online. That simple search brought that need to my attention and was the genesis of my Floater series.

A.S.: Creating this work must have required a certain amount of piecing together of Patrick’s history and legacy. What captured your imagination about Patrick’s story?

D.A.: I loved learning the importance of his grandmother and how her personal style directly inspired his iconic collections. She would sew on buttons and appliqués to embellish her garments. That those looks would eventually make it to the runways of Paris and onto the backs of icons like Bette Davis is so gratifying to me personally because the many women in my family have been such a huge source of inspiration and strength.

D.A.: Fashion is somehow attached to identity in the way people look at you and what you have on which suggests a reflection of your personal taste and interest. If anything, Patrick taught me that if you are excluded, you create a space for yourself.

A.S.: You’re a truly multidisciplinary artist — your practice spans many mediums. What drew you to the medium of collage for this body of work?

D.A.: Collage was a natural choice because the basis of this body of work is the “mood board,” or the collection of images, objects and elements, which inform the outcome of a final product. As mood boards are used often in many creative disciplines but especially in fashion, I wanted to explore and celebrate Patrick’s logic and creative process and influence, as I’m certain his work found their way to many other creatives’ mood boards.

A.S.: The works in “Patrick Kelly, the Journey” are abstract, but they also reference the figure through their scale and the incorporation of Patrick’s vintage clothing patterns. How does the figure coexist with abstraction in your work?

D.A.: I incorporate the clothing patterns both for their interesting shapes but primarily to suggest the physical form. To me they read as the figure moving and posing, almost like the figure is walking through the structure altering its formation.

A.S.: The works in the exhibition also borrow from the bright colors, patterns and geometric forms of Patrick’s joyful designs. Do the formal qualities of these works have other personal resonance or meaning?

D.A.: The show gave me the opportunity to explore using hard-edged geometric forms more expressively — other than the more clear forms of representation — to think about certain levels of gesture that could be created through abstraction and color. The physical act of making the work felt a lot more playful.

A.S.: You recently joined your friend, cultural critic Antwaun Sargent, in conversation at SCAD Atlanta and you spoke about fashion as an almost democratic way of expressing one’s power of creativity. How important is it for you to create a sense of empowerment in your work and how does that inform how you’ve engaged with Patrick’s story and history?

D.A.: I’m not setting out trying to create empowerment, I’m trying to represent histories that are important to me and hope these histories inspire others to think differently about contributions to contemporary and modern culture that are not the most obvious or talked about.

A.S.: Before finding acclaim in Paris, Patrick spent several years in Atlanta, after moving from Vicksburg, Mississippi — and his ties to the South are an important part of the exhibition at SCAD FASH. Why is it meaningful to reflect on Patrick’s formative experiences before he found greater success?

D.A.: Like with many artists, it’s important to know the origin of their experience, starting from the beginning, and all the things he went through to get to where he is. That Atlanta is where he first started designing is a valuable piece of history.

A.S.: Patrick’s legacy is particularly poignant for our fashion students at SCAD. On the occasion of your exhibition, we launched the Patrick Kelly Initiative competition as a platform for the work of recent alumni. We asked the participants to create an original design of their own using Patrick’s vintage patterns as a point of inspiration.

Did you feel a kinship with our alumni as they took similar inspiration from Patrick’s life and work? What did you find most moving about the garments they created?

D.A.: When you look at the history of people who’ve influenced society, as a creative you take away different things based on your personal interest in that history. That’s what was important about having this exhibition in a fashion museum with young fashion designers: it gives them a different way to look at their own practice and how it could be influenced by designers from various backgrounds, and be able to use that exposure to explore what can make their work unique and determine what elements of their practice are essential.

I was amazed at the time constraints given to make the garments and understood their passion. It was interesting to see how people can be directed towards a single inspiration and accomplish such varied looks. 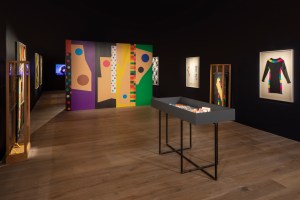 A.S.: The winning garment by Nafisa Eltinay (SCAD B.F.A., fashion, 2019) is now on view at the museum in dialogue with your exhibition, and all of our alumni were honored to have the opportunity to share a moment in your artistic journey. It’s one of the many reasons why our fashion program is so special — and we thank you for being a part of that.

As you’ve developed as an artist, who were your most formative mentors and how do you pay that forward?

D.A.: New York is my mentor. I listen to what is going and observe and take note and let those things influence my decision-making. I pay it forward by taking all that information and passing it on to those who ask and listen. I try to assist other artists to get things done. For those not in New York, the key seems to be to engage with your community and process the positive and share what you know.

A.S.: Like Patrick, you’ve defined your own vision and your own point of view, but within that, you’re constantly evolving too. So, what’s next for Derrick Adams?

D.A.: More creating. Work is play for me. I have a show just opened at the Hudson River Museum and also beginning work on a film. I’ll be expanding the Patrick Kelly inspired Mood Board series into larger-scale works for an upcoming show at The Henry in Seattle as well as a project with the Milwaukee Art Museum, Salon 94, Rhona Hoffman Gallery, all in 2021.