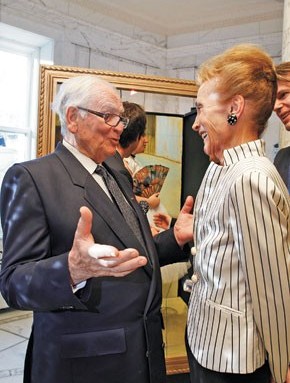 Pierre Cardin was hands down the shining star at the Savannah College of Art and Design’s Etoile awards ceremony at the Cultural Services of the French Embassy.

His fellow recipients — interior designer Jonathan Adler and Elle Decor’s editor in chief and Bravo’s “Top Design” judge Margaret Russell — each told Cardin in their acceptance speeches how much they worship him. Lee Radziwill, Blaine Trump, Dakota Jackson, Anne Bass and Anne Slater were among the other well-wishers at the school’s first awards event in New York.

Many lingered in the embassy’s foyer, where Cardin, a Commander of the Legion of Honor, greeted guests and models posed within framed replicas of paintings by René Magritte and Edgar Degas. Once the festivities were under way, SCAD president Paula Wallace talked up the school’s 9,000-member student body and 1,000-person faculty and its standing as the “largest college for art and design in the U.S.”

Cardin became acquainted with SCAD in Lacoste, France, where he owns the Marquis de Sade’s former château and a good deal of property, as does the school, which also has a satellite campus there. The designer, who was recognized by SCAD in part for his historic restoration and cultural contributions, said, “This place is very magical, small and very protected. We are trying to make something that will protect the artists.”

As for Thursday’s occasion, he said, “This prize represents 60 years of my life. I love this prize. Today, I am here to receive this marvelous prize. Etoile is a star, you know.”

The designer received two standing ovations, but what really grabbed the crowd’s attention were two of his quotes that were flashed in a video. “The jean! The jean is the destructor! It is a dictator! It is destroying creativity. The jean must be stopped!”

And, “I need to make fashion because I lose everything if I stop. Some people like golf….”

Afterward, floral designer Olivier Guigni, who worked for Cardin at Maxim’s for years, said of the designer’s success, “He takes chances. He takes chances with people. He took a chance with me. I had no diploma. But he likes to understand people, he likes life and he likes beauty before everything else.”