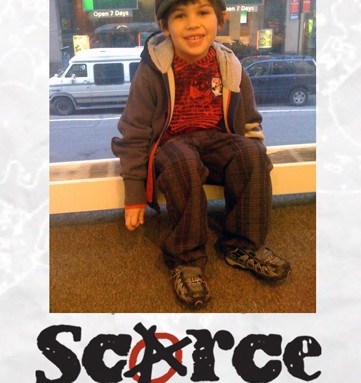 Kids who want to rock the skinny jeans look will have a new brand for fall.

Topsville, the children’s wear division of Jaclyn Inc., is launching Scarce, a premium fashion label with a rock-’n’-roll vibe for boys in the 2 to 7 and 8 to 20 size ranges, reaching kids from about 18 months to 12 years old. Retailers are getting a first look at the line during children’s market this week.

“We’ve been a big supplier in private label to the boys’ business, and now we are creating our own brand in the category,” said Mark Nitzberg, president of Topsville.

The Scarce concept was created and brought to fruition by Jeff Korman, an industry veteran who was instrumental in the launch of DCoded, another boys’ label that bowed at more than 575 Macy’s doors last year. DCoded is owned by New York-based Success Apparel, which Korman exited in order to start Scarce.

“I saw a void in the marketplace for a very cool, edgy boys line in 2 to 7 sizes,” said Korman, senior vice president of new development at Topsville. “What I’ve learned is that this surf-and-skate look sells very well at retail for boys — especially with the decline in the urban business — and I wanted to bring it to an even younger demographic.”

Along with the Scarce launch, Topsville is creating a similar line with lower prices for the midtier channel under the Remastered label. In addition, both Scarce and Remastered will offer young men’s components for spring 2011.

The company plans online and print advertising campaigns to help drive the retail launch for back-to-school, and will also partner with young bands for in-store music events, said Korman.

Nitzberg declined to provide sales projections for Scarce and Remastered, but said he expected them to become “very significant” businesses.

Topsville is the largest division of Maywood, N.J.-based Jaclyn Inc., which is primarily a private label manufacturer of women’s sleepwear, children’s wear and bags for clients such as Wal-Mart, Macy’s, J.C. Penney, Sears and Kmart. Jaclyn is a $167 million business and is publicly traded on the “Pink Sheets” over-the-counter market. The company has global sourcing operations throughout the Americas, Asia, the Middle East and Africa.