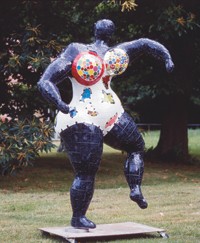 SOME ENCHANTED EVENING
ATLANTA — At the Atlanta Botanical Garden this summer and fall, “Niki in the Garden,” the world’s largest exhibition of Niki de Saint Phalle’s massive sculptures, is a magical, enchanting experience, especially on Thursdays, during Niki Nights, when the whimsical forms come alive with shimmering lights.

The 35 sculptures, some as tall as 18 feet and as long as 25 feet, are steel armature and polyurethane foam structures, covered in mosaics of tumbled stone, glass, mirrors and ceramics.

The stars of the show are Saint Phalle’s famous “Nanas,” including The Three Graces, which frolic in the Garden’s aquatic plant pond, water spewing from their heads, arms and legs. Nana is French for “chick” or “babe,” and these gargantuan creatures are powerful, joyful tributes to the female form, exemplifying Saint Phalle’s statement: “Women are the goddesses of creation. They are terrifying, full of possibilities…and pregnant with new life.”

“Niki in the Garden” also illustrates the artist’s intense curiosity and passion for life. Mythical dragons, symbols and animals include the show’s longest piece, “Nikigator.” Multicultural tributes include Native American-inspired totems and sculptures dedicated to prominent African-Americans including Miles Davis and Louis Armstrong. Many pieces, such as “La Cabeza,” an eight-ton head with pebbled benches carved inside, are interactive, inviting visitors to walk through, climb on or sit in them.

PRIME LOCATION
CHICAGO — When Travel + Leisure magazine named Chicago’s new The James hotel to its “It List” as one the coolest new hotels for this year, the destination’s swanky restaurant, David Burke’s Primehouse, played a pivotal role.

With its warm, understated decor, Primehouse is a perfect extension of the hotel’s modern yet comfortable aesthetic, and its stellar selections make it a powerhouse on the local restaurant circuit.

Delving into a market plump with steak houses, Primehouse is able to carve its own niche in the Windy City, thanks to partner David Burke’s creative menu and quality cuts.

Much of the meat is handpicked from Kentucky’s renowned Creekstone Farm, where Burke and owner Stephen Hanson of B.R. Guest Restaurants bought their own bull. The beef is then dry-aged on site in a salt-tiled aging room in the restaurant’s basement.

“We really have control over the beef, from bull to plate,” said Jason Miller, executive chef.

But it’s not all about the beef. Sure, the menu is anchored by the 24-oz. porterhouse ($39) and “South Side” bone-in filet mignon ($39) but it also boasts a Maine lobster steak with candied lemon ($42) an impressive Chilean sea bass with shrimp ($32) and Caesar salad mixed tableside ($10).

BRIDGE OVER HIP WATERS
LOS ANGELES — Brothers Nick and Dipu Haque have followed up on the success of Koi — their West Hollywood Japanese restaurant that’s become a de rigueur stop for celebrities such as Jeremy Piven — with Bridge, an equally hip Italian restaurant and lounge, across the street from its sibling on La Cienega Boulevard.

Chefs Santos MacDonal and Mirko Paderno, formerly of Dolce, spearhead a seafood-heavy menu that includes entrées such as organic Scottish salmon, asparagus ravioli and risotto with lobster, crab and calamari. Appetizers include a delectable Kobe beef carpaccio and Sevruga caviar served with fresh orange. Entrée prices range from $16 to $68, with most hovering around $30.

And the atmosphere at Bridge is as integral to the experience as the cuisine. The cavernous restaurant, formerly the casual Alto Palato restaurant, has been reimagined as a mid-Sixties Aspen-style lounge, with imposing conical chandeliers rendered in gold-tinged blown glass. A spiral staircase flanked by glass pillars leads to the upstairs restrooms. Spacious cream-hued booths line the far wall, below a massive sculpture composed of interlocking rings of teakwood.

The cream-and-gold palette extends into the lounge area, where the likes of Matthew Perry sip before-dinner drinks at the incandescent glass bar. Late-nighters linger until 2 a.m. on overstuffed sectionals framing a sunken lounge just below the bar — spilling out onto a patio with candlelit booths.

Piano, a design maverick who taps the angular synergies between modern and abstract styles and explores the links between architecture and nature, designed the Nasher Sculpture Center as well as the Centre Georges Pompidou in Paris (in collaboration with Richard Rogers); the mile-long Kansai International Airport in Osaka, Japan, and the Jean-Marie Tjibaou Cultural Center in Noumea, New Caledonia.

The installation highlights more than 30 years of Piano’s work, both completed projects and those in progress, and is designed to mimic an architect’s studio. The layout includes 10 “project tables” that give visitors an insider’s view of a project from start to completion, including conceptual notes, drafting blueprints, scale models, films, photos and construction materials such as stone, steel and glass. The exhibition also emphasizes Piano’s sensitivity to ecology and nature, as well as his use of light and the illumination of buildings.

Piano describes the exhibit as “a sort of traveling circus, a way to present architecture as a metaphor for the adventures of life, but also as an art.”

The exhibition was organized by the Renzo Piano Building Workshop in Genoa, Italy. Dallas is the final stop on the tour, which also has included stints at the Los Angeles County Museum of Art and Atlanta’s High Museum of Art, another of the architect’s works in progress.

ROCK YOUR BODY
LAS VEGAS — The Hard Rock Hotel & Casino’s subterranean club, Body English, has gained a reputation for throwing the hippest and most lavish Las Vegas parties, attracting a boldfaced crowd on any given night of the week — especially on Sundays, when the faithful flock to Sunday School, a weekly party that requires guests to dress according to a school theme, be it driving school, flight school or school of rock.

Harry Morton, son of Hard Rock Hotel & Casino chairman Peter Morton, spearheaded the $7 million renovation of Baby’s Nightclub in 2004, partnering with Los Angeles nightlife impresario Brent Bolthouse to bring the Hollywood scene to Sin City. Bolthouse is best known for the success of Los Angeles hot spots such as Joseph’s, Roxbury, Dublin’s, Viper Room, Las Palmas and, most recently, LAX and Hyde. In addition to Hilton sister and Christina Aguilera sightings, the club also is known for its spontaneous performances by celebrities, from Snoop Dogg to Camp Freddy to Tone-Loc. The luxe interior, designed by Kelly Wearstler, features black walls, brown studded-leather booths, two-way mirrors and a massive $250,000 Baccarat chandelier suspended above the dance floor. A $25,000 annual fee buys any guest a VIP membership and invitations to special events, and a minimum of $300 allows any party goer the opportunity to spend the evening in a bottle service booth in a VIP section. The exceptionally rich and famous can even command The Parlor, a hidden room on the dance-floor level with a two-way mirrored wall through which VIPs can peer out at those dancing the night away. Flush guests also can order up The Presidential, a $2,000 martini with real gold flakes. World-renowned spinners DJ Skribble and DJ Vice work the turntables nightly, playing the latest hip-hop, rock and house.

GRECIAN FORMULA
NEW YORK — Modern Greek restaurants have sprung up all over this city lately, but Parea, in the Flatiron District, is one of the most interesting.

Here, chef-partner Michael Symon, a star of the Cleveland culinary scene, pays homage to the other half of his Italian-Greek heritage, but has left the kitchen to his protégé, executive chef Jonathon Sawyer.

Parea means “group of friends” in Greek, and most of the dishes are designed to be shared. Hot and cold mezedes ($7) come in bite-size portions, and the appetizers ($9-$23) are slightly larger. All the plates put an innovative twist on traditional Hellenic fare, with flavors that range from lobster dolmades and scallops marinated in spicy yogurt to crispy lamb brain, grilled pickled octopus and a hearty house-cured sausage served with feta, olives and pickled vegetables. Entrées split time between fish, meat and poultry — delicate halibut over fava puree, watercress and wild asparagus in a not-too rich lemon sauce ($26); grilled lamb loin with fig yogurt, almonds and arugula ($26), and tender roasted chicken with zucchini, cipollini and whipped feta ($21). Desserts ($9), also meze-size, include Greek doughnuts with cinnamon glaze, honey cream and sage iced tea, and a yogurt sorbet with dill syrup and dried cherries.

To help put diners in the mood to share their food, the space is sleek and sexy. Shades of white are softened by undulating textures, rough brick columns and a canopy of filigreed foliage backlit by a warm sunset glow. High, narrow communal tables and low-slung lounge seating encourage the young, professional crowd to get to know one another over one of a dozen Greek wines offered by the glass or a cocktail such as the Ginger Rickey, a blend of ginger and ouzo ($14).