Luck Of The Draw
LAS VEGAS — Eight is a lucky number and red a lucky color in Asian culture, so it's no wonder that Red 8 is among the most popular places to lounge or casually sup inside the new Wynn Las Vegas (which boasts... 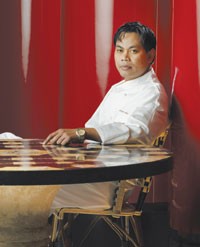 Luck Of The Draw
LAS VEGAS — Eight is a lucky number and red a lucky color in Asian culture, so it’s no wonder that Red 8 is among the most popular places to lounge or casually sup inside the new Wynn Las Vegas (which boasts some 22 places to eat and drink).

Against a lush backdrop of red crocodile-textured walls and white and blue chinoiserie, diners take a culinary joyride on jellyfish with pickled cucumbers, sweet potato porridge with sage or braised abalone with seasonal greens. And, this being Vegas, dim sum isn’t relegated to just Sunday; it’s also available from 11 a.m.-3 p.m. Friday and Saturday. Behind the delicious Cantonese and Southeast Asian menu is Malaysian-born executive chef Hisham Johari, formerly of Noodles in the Bellagio hotel.

Hard as it might be not to order something to eat, the Red 8 bar is also a favorite spot, due in no small part to its yummy take on mojitos, made with fresh mint and crushed pineapple.

Up Against The Wall
DALLAS — The May 20 opening of Goss Gallery here was such a happening that organizers had to shut the party down early for fear the space might be overwhelmed.

Why all the fuss? Owner Kenny Goss is the partner of Wham! frontman George Michael, and the pair’s very presence is a big lure for the social set in Dallas, where the couple shares a high-rise second home. (Their main digs are in a country manor on the Thames near Oxford, England.)

Specializing in edgy contemporary artists, the gallery is a departure for Goss, 47, who retired last year from a successful career managing sales of uniforms and cheerleading togs for National Spirit Co. He began collecting art about 15 years ago.

“I’m a late bloomer,” Goss joked. “When I was growing up, the art in my house was prints from the A&P supermarket — we got everything framed.”

Goss’ travels with Michael over the past 10 years and tutelage from art historian Jane Cooper broadened his horizons considerably, and now he says his gallery will represent the artists he loves.

By hiring curator and director Filippo Tattoni-Marcozzi, who is also manager of the respected Hamiltons Gallery in London, Goss Gallery has lined up some strong shows, such as its debut exhibit of David LaChapelle’s flamboyant celebrity and pop culture photographs. The LaChapelle show, which closes Aug. 12, will be followed by a September opening of new paintings by Richmond Burton and new paintings by James Nares in November. Opening dates for these shows have not yet been announced.

“We try to take to Dallas everything new,” Tattoni-Marcozzi said, “and not something that is not the best we can do.”

When The Chips Are Downtown
LOS ANGELES — For some, it’s the meatloaf. For others, the big chopped salad or the chicken-fried steak. But for the hard-working crew at Guess Inc., it’s the chocolate chip cookies that call to them from Blue Star, the supercool downtown diner opened last fall by chef Kash Brouillet.

“I’ve tried doing other stuff, but they demand the chocolate chips,” shrugs Brouillet, a lithe, tattooed Alaskan native who interrupted a lifelong love affair with the kitchen — at 14, he took a job as a dishwasher to spy on the cook — with stints as a rock musician and road manager for The Cramps.

Now he caters to groupies from the neighborhood’s surrounding fashion and legal firms, who spill out from the inside dining area onto the barbecue-appointed patio in search of comfort food for breakfast and lunch. Once the liquor license comes through later this summer, the place, replete with an old jukebox, will likely add to downtown’s burgeoning late-night scene.

Social Scene
NEW YORK — Why should you be restricted to just one appetizer and one entree? The Stanton Social certainly doesn’t think you should.

The Stanton Social, one of the latest eateries on the Lower East Side, a neighborhood growing synonymous with culinary triumph, delivers the goods on almost every level. The 50 or so items on executive chef Chris Santos’ menu — French onion soup dumplings ($8), mini Kobe beef burgers ($5 each), duck empanadas ($9), venison carpaccio ($9) — were created with sharing in mind.

But it’s not just the food that’s creating buzz. The Stanton Social is a collaboration between Santos and Richard Wolf, owner of Tao nightclub; Peter Kane, owner of the downtown lounges Happy Ending and Double Happiness, and AvroKo, the James Beard award-winning design team, so it’s a feast for the eyes as well as the tummy.

The focal point of the tri-level restaurant includes a 30-foot glowing wine rack filled with more than 2,000 bottles in a herringbone pattern. The fringe-covered walls, lizard-skin banquets and belt-strapped windows and seat cushions are a nod to Forties glam and the neighborhood’s garment industry past, as is the staff uniform of Mary Janes, A-line skirts and seamed stockings. Go for the food. Stay for the scenery.

Food For Thought
CHICAGO — Few Chicago restaurants have been as greatly anticipated as Grant Achatz’s Alinea. Its May 4 opening night attracted food critics from across the country. Following rave reviews, customers have flown in from as far away as London and Tokyo.

“It is the ultimate compliment,” said Achatz, who left acclaimed Trio restaurant last July to develop the progressive American concept behind Alinea. “I hope we continue to garner a national or international audience.”

Fusing food, art and science, Alinea (a typographical symbol signifying a new train of thought) offers three degustation menus: seven courses for $75, 12 courses for $110 and a 28-course “Tour” menu for $175.

Innovation is apparent at every turn. Diners encounter a table centerpiece of “sculptured” ginger that at one point is grated into juice and poured over a beef dish for what Achatz calls a deconstructed A-1 steak sauce.

A bowl of poached clams, mussels and water chestnuts, meanwhile, is set inside a larger bowl of fresh hyacinth petals. Servers then pour boiling water into the larger bowl, releasing the floral fragrance. “You can almost taste the flowers,” Achatz said.

But get it while it’s hot: Achatz plans menu changes every 10 to 12 weeks.

“We don’t want signature dishes,” he said. “Creative energy is a priority for all of us in the kitchen, and by constantly evolving our menu, we continue to push ourselves as chefs.”

South Beach Meets the Big Peach
ATLANTA — People are talking about Shout, the 18,000-square-foot restaurant that opened in February at Midtown’s Colony Square.

Owned by master chef Tom Catherall, of Atlanta’s Goldfish, Prime, Twist, Noche and Peri Peri restaurants, and designed by The Johnson Studio, Shout has three distinctly different dining areas on two levels. The Asian-inspired bamboo room features a community table and sushi bar. The Mediterranean room is anchored by a large oval mosaic-tiled bar and features cozy red Venetian banquettes and a velveteen S-shaped sofa that divides the expansive room. The upper level has a creamy South Beach ambience, with wicker furniture and private cabanas located on a patio, and a sexy interior lounge. City skyscrapers light up the night for dramatic views from the rooftop space.