PRESERVATION SOCIETY
MADRID — Like the Phoenix rising from the ashes, Museo Chicote, one of Madrid's oldest cocktail bars, has shed its stodginess and morphed into the Spanish capital's fave watering hole for fashionistas... 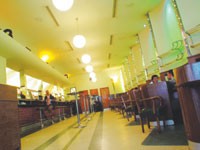 PRESERVATION SOCIETY
MADRID — Like the Phoenix rising from the ashes, Museo Chicote, one of Madrid’s oldest cocktail bars, has shed its stodginess and morphed into the Spanish capital’s fave watering hole for fashionistas such as Carolina Herrera Jr. (pre-baby) and Alejandro Amenábar, this year’s Oscar-winning director of “The Sea Inside.”

Founded in 1931 by Pedro Chicote, once head barkeep at Madrid’s Hotel Ritz, Chicote has not — repeat, not — been spruced up by new owners Pedro Serrano and Alexis Rojas. The pair has preserved the bar’s emblematic Art Deco interior, including its revolving-door entry, well-worn pistachio green leather banquettes and black-and-white photos of luminaries such as Ava and Frank in the Fifties, a wrinkle-free Salvador Dali, Pedro Almodovar, Tim Robbins and local ready-to-wear designer Amaya Arzuaga looking for all the world like a young Irene Papas.

The drink de moda is a mojito, Serrano said, a generous dose of rum, mint and lime juice for about $10. Chicote opens at 8 a.m. for coffee and breakfast and shutters around 3 a.m. Skip lunch, it’s pedestrian fare like gazpacho and paella for about $12, including wine. Dinner is not served. The scene doesn’t start hopping much before the witching hour, when a DJ spins nightly for the best-looking crowd in town.

No wonder that, in November, this bar bagged the prestigious MTV Recommends/Campari award for The Best Bar in Europe.

THE KIWI CAPE
AUCKLAND, N.Z. — Forget hanging with the hobbits. If you’re looking for somewhere to chill after Air New Zealand Fashion Week in Auckland, you might want to take the 35-minute ferry ride to Waiheke Island ($18 round-trip). Dubbed the New Zealand Nantucket, Waiheke is a 35-square-mile island in the Hauraki Gulf that’s groaning with white sandy beaches, rocky shores, olive groves, vineyards and green pastures.

With a climate and latitude similar to those of Sicily, the island is perfectly suited to the growth of Bordeaux-style reds and boasts more than 20 wineries that produce some of New Zealand’s finest wines. One of them, Stonyridge Winery, which produces Larose, recognized as the country’s finest claret-style red, is a must-visit. If claret’s not to your taste, go for its extra virgin olive oil, the Verandah Cafe or its day (dance) parties that some devotees say remind them of the best of Ibiza.

Waiheke’s other must-visit restaurants are the Mudbrick Cafe and Vino Vino. There’s also kayaking, bush-walking and whale-watching. And you don’t have to slum it in backpacker hostels or musty beach rentals. Waiheke’s swag of luxury accommodations include the Nantucket-style The Boatshed ($370-$540 per night) and Delamore Lodge, a plush four-suite Mediterranean-meets-Maori inn whose design was inspired by a traditional Maori matau, or fishhook ($495-$700 per night).

OTTO PILOT
MONTREAL — Otto restaurant in the new W Hotel (Canada’s first) was a favorite with the fashion crowd during the last edition of Montreal Fashion Week in March, when it received extra exposure by hosting an Armani fragrance launch. Housed in the former Bank of Canada building on the edge of Old Montreal, the hotel and restaurant are connected to the convention center and subway system by an underground passage, an important consideration during winter.

Otto is an Italian fusion restaurant with a striking red bar, private dining room for up to 16 and wood-inlay tables. Private alcoves for six are enveloped by eight-foot walls textured with seashells and bathed in soft light. To start off a meal, try the Angus beef tartar with green onion sauce, poached quail egg and avocado ($13) or the red endive salad with pistachio chardonnay vinaigrette and Pecorino cheese ($11).

For meat lovers, there’s roasted duck breast glazed with a sweet and sour marinade and served on a bed of sticky rice with portabella mushrooms, beets and Asian greens ($30). For seafood lovers, there’s truffle-stuffed scallops wrapped in prosciutto, braised endive and scallop sashimi salad with caramelized onion emulsion for $32.

Still have room for dessert? Try the orange angel food cake with melon, vodka, blueberry jelly and pineapple sorbet or the goat cheese cake with pears, cranberries, pear sorbet and candied walnuts, both priced at $8.

NEW WAVE
PARIS — Vin Diesel and Bruce Willis already have found their way to Neo, American Nick Blast’s groovy new Paris nightclub. Blast, the backward baseball cap-wearing fixture of the French party scene, discreetly opened his latest club in March, and word of mouth has spread quickly to models, movie stars and tuned-in locals. The decor is hip, chic and black except for the bar, which is brightly lit with plasma screens animating the walls with music videos. The DJ plays hip-hop, soul, electronica and Blast’s favorite: rock music.

FIT FOR A QUEEN
LONDON — A British woman is crowned Queen unexpectedly and needs a wardrobe to match — it might sound like a recent royal love story, but it is, in fact, the subject of the Victoria and Albert Museum’s latest yearlong exhibition, “Style and Splendour,” which celebrates the diverse wardrobe of the late Queen Maud of Norway.

Maud, one of Queen Victoria’s granddaughters, became Queen of Norway in 1906, when her husband and cousin, Prince Carl of Denmark, was nominated to become king of Norway after it gained independence from Sweden in 1905. The exhibition, which examines Maud’s wardrobe from 1896 to 1938, illustrates the demands her royal role placed on her dress — the myriad accessories needed for five or six wardrobe changes a day, along with outfits for riding and Norway’s national sport, skiing.

The exhibition also chronicles how rapidly fashion changed during those years. On display are designs as disparate as floor length, princess-style evening gowns, which Maud wore in the early 1900s, to the knee-length Twenties-era evening dresses by British designers at Blancquaert that Maud wore at the age of 58, and several designs by the French house Worth.

The exhibition, which coincides with the centenary of Norway’s independence, runs at the V&A until January 2006. Admission is free. A book to accompany the exhibition, “Style and Splendour: The Wardrobe of Queen Maud of Norway,” is available for about $57.

True to the store’s “pure chocolate” moniker, all the products are made with pure cacao, often mixed with seasonal ingredients such as violet petals, sunflower seeds, ginger, pepper, toasted nuts and candied orange and lemon peel.

And if that’s not enough to tickle your palate, try these goodies with a glass of red wine. The owner recommends Recioto Valpolicella or Barolo Chinato, specially created for chocolate addicts (each $25 per bottle).

CIAO DOWN
Hong Kong — The local Italian expat community has given Isola bar + grill its stamp of approval. The Italian restaurant and bar was one of the first restaurants to set up shop in the swanky new IFC mall in the Central district. Being first has its advantages: Not only is there a view of Victoria Harbor, but there also is alfresco dining on a large terrace, a rare commodity in exhaust-choked Hong Kong.

Starters include a double layer of beef carpaccio with lemon and pistachios ($22) or a more basic arugula and mushroom salad with grapes and shaved Parmesan ($13). For dessert, don’t even torture yourself: Go for the chef’s selection of five different desserts to share ($25). In between, myriad options range from pizza ($14) to a one-kilogram (2.2-pound) prime rib with vegetables and potatoes ($86) to risotto with lobster and cherry tomatoes ($28). Grab a drink before or after your meal in the glass-enclosed rooftop bar; it’s open late.

Spacious as it may be, Isola fills up quickly, even on weeknights. Be sure to call for a reservation, or you’ll be dining in true late-night Mediterranean style.

HOW SUITE IT IS
SAO PAULO, Brazil — The capital’s newest and hottest luxury hotel, the Fasano Hotel e Restaurante, was running short of suitable accommodations for the likes of Naomi Campbell, Lenny Kravitz, Roman Polanski and Diane von Furstenberg.

So only a year after opening, the five-star boutique property gutted a series of deluxe rooms on two floors to create two additional suites, bringing the count to 10. Opened in February, the new suites each have an adjoining deluxe room that can be used for meetings or to house an assistant.

Architects Isay Weinfield and Marcio Kogan designed the Fasano with an eye toward Old Hollywood ambience. Outside, the hotel’s red brick facade tapers to a clock-tower-inspired top, while inside, World War II-era sofas and armchairs bought in London, Paris and New York grace the marble lobby.

In addition to an indoor pool and sweeping city views, the hotel also boasts a cozy jazz club, Bar Baretto.

But its crown jewel is the Fasano Restaurante, an Italian haute-cuisine eatery considered to be one of the city’s finest. When fourth-generation restaurateur Rogerio Fasano built the hotel on a street named after his great-grandfather, he relocated the 25-year-old Fasano Restaurante there, marking the 100th anniversary of the family’s first restaurant.

GREEN PARTY
DUSSELDORF — Jaded: Dusseldorf’s fashion cognoscenti are anything but, especially now that trendy Jades boutique is opening a second door around the corner, More Jades.

As the retail baby of Unifa — the German fashion agency that reps 18 hip American brands, including Seven For All Mankind, Von Dutch, Chip & Pepper, C&C California, Rock & Republic and Juicy Couture — it’s not surprising that Jades has led the pack with must-have denim, designers and upmarket sportswear since opening in 2000.

The new men’s and women’s store features feel-good fashion plus shoes, books and cosmetics. Twice the size of its sister, at 6,500 square feet, the new Jades is outfitted in its typically over-the-top, hippie-esque decor.

“Everyone keeps asking when sparkle is going to stop, but I don’t believe it will,” said Evelyn Hanmerstrom, Unifa co-founder and “the face behind Jades.” “Girls are happy that they found this style. And even the denim thing won’t stop. It’ll go on and on,” she predicted.