A look at some of the names at L.A. Fashion Week. 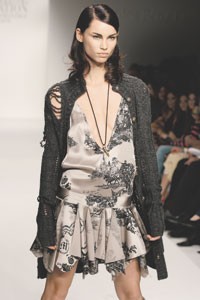 Corinne Grassini presented her usual structured, minimalist designs for her Society for Rational Dress collection, which was partly inspired by the late, great balladeer Serge Gainsbourg.

Jennifer Nicholson worked darker elements into her typical vintage-inspired looks, resulting in easy day dresses, some in whimsical star prints, and full-sleeved blouses and retro coats. However, her plays with proportion and an unfortunate crinkle fabric sent a fair portion of the collection awry.

The iconic style of Diana Ross in the 1975 film “Mahogany” was Kevan Hall’s inspiration for his fall collection, which featured flowing silk gowns and tweed separates in rich shades of brown, all fit for a modern diva.

Passport required. Sue Wong sent her international women of glitz and glamour on a global adventure with embellished dresses, such as beaded flapper-style gowns, along with somewhat Gothic and Edwardian coats.

Corey Lynn Calter returned to the Los Angeles runways with romantic bohemian peasant girls. Her signature feminine frocks and blouses were pretty and vintage in feel, but were overstyled with the addition of leggings, layers of socks and big rubber boots.

Ya Ya designer Yael Aflalo played it safe with English country staples, such as wool trenchcoats and twill jodhpurs in a solid palette of neutrals.

“Project Runway” alum Kara Saun should have paid more attention to the adage that less is more. Saun’s mostly eveningwear collection showed her skill at construction, but the gowns were overdone, accented with pleats, ruffles, high necks, gathers and more.

Octavio Carlin has finally found his voice as a designer this season with pleated columns cinched with thin rhinestone buckle belts, as well as Sixties-style swing dresses, all in a rich palette of midnight blue and bronze.

At Agent Provocateur’s first American show, even a heavy dose of rain couldn’t dampen the spirits of fans, including Courtney Love, Christina Aguilera and Cher. They were wowed by dominatrix-worthy fare mixed with retro and kitsch.

Designer Christopher Enuke’s popular star-pocket jeans made another turn down the Oligo Tissew runway, this time in an indigo drainpipe, but it was his foray into leather jackets, such as a bright mustard yellow bomber and a hunter green trench, that stole the spotlight.