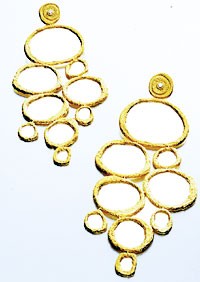 From Rocks to Riches

As a teen in Paris, Catherine M. Zadeh would use her free time holed up in a chambre de bonnes dabbling with oil colors on canvases. She also painted on silk, making cushions and scarves that she began to sell to her friends and neighbors.

Nowadays, Zadeh, 42, has given up her Paris home for a Manhattan address and has traded her canvases and silks for stones. After creating a successful collection of men’s cuff links, she has now turned her attention to women’s jewelry, which she will present at the Designer Atelier of the Couture Jewellery Collection & Conference in Phoenix, Ariz., Saturday, May 29.

Zadeh started making jewelry when her husband, David, a loose diamond trader, encouraged her to create designs for herself that he could manufacture. A male friend saw three self-made stackable rings, then asked her for cuff links and eventually encouraged her to start a men’s jewelry collection.

But it wasn’t until recently that she decided to give women’s jewelry a go. “My kids were big enough, and I could put more time into my business,” she said.

Zadeh uses 18-karat green gold and encrusts the metal with small, delicate diamonds rather than common settings. “It gives a brilliance to the jewelry without making it too overwhelming,” she said. “It glitters, but not in a gaudy way.”

The women’s jewelry includes the Bubble Collection, which features 18-karat green gold handcrafted circles assembled into earrings and necklaces. The group is priced at retail from $800 for 18-karat earrings to $18,000 for a necklace encrusted with bigger diamonds.

Zadeh also designs women’s belts with candy-colored crocodile straps and jewelry buckles — some of which draw from the Bubble group. The belts retail for around $1,000.

“I get inspired by everything — by nature, texture, architecture…everything that is around us,” she said.

The line already has been picked up by Reinhold Jewelers in San Juan, Puerto Rico, and Sabbia at the Ritz Carlton Hotel in Key Biscayne, Fla., and sales projections for the women’s collection are about $500,000. — Marc Karimzadeh

Susan Sontag once wrote that “to photograph is to confer importance,” and that’s likely the case with “Cathy Waterman Classics,” an artful photography folio of the designer’s most popular jewelry looks.

Cathy Waterman plans to self-publish the book this fall, and the spiritually inclined designer describes the project, which has taken several years, foremost as a labor of gratitude.

“I wanted to somehow thank my customers for their support over the years and acknowledge that they are the ones who created these ‘classics,’” Waterman explained. “That was the genesis of the book.”

“Cathy Waterman Classics” was shot in color by John Patrick Salisbury, a West Coast photographer known for portraits as well as a moody black-and-white art series of his two cousins.

The designer, who makes few personal appearances, revealed her plans for the 9-inch-square coffee-table book while in Dallas for a May trunk show at Ylang-Ylang, her exclusive account in Texas.

Over lunch, Waterman said she originally envisioned a “Steichen-like book” and asked Salisbury to shoot the jewelry in black and white.

“My husband looked at the pictures and said, ‘You don’t get that ahh feeling that you get from your jewelry,’ and he was right,” she said. “We reshot it in color, and it’s very beautiful. There’s not much copy because it’s not about me, it’s about the work.”

The book will feature styles that have become signatures since she began her business in 1989 when “I discovered I could draw.” So expect to see Waterman’s organic flower earrings, tassels, vine and leaf motifs as well as the “child” charm necklace and others.

Though she hasn’t yet settled on a publisher, Waterman expects the volume will be sold through stores that carry her jewelry, a relatively short list that includes Barneys New York, Neiman Marcus and such specialty stores as Twist in Portland, Ore.

As for her biennial appearance at Ylang-Ylang, the trunk show tallied more than $200,000 in sales and orders. Top sellers were her newest styles mixing platinum and diamonds with round and cabochon beads of angel skin coral, a rare coral whose hue ranges from pale pink to soft peach. “I’ve been looking for light angel skin coral for a long time, and I was told it didn’t exist,” she said. “It’s the color of the inside of a baby’s ear.” — Holly Haber

Courtney Plumb’s jewelry could easily outfit the fashionable and fun-loving heroine of the latest romantic comedy. But a protagonist in a psychological thriller? A fan is a fan, however, and when actress Robin Tunney walked onto the set of her latest film wearing one of Plumb’s necklaces, the costume designer immediately ordered more for the film.

The moment was a gratifying one for the former marketing manager for Banana Republic who started designing her collection of precious and semiprecious jewelry two years ago.

The move to jewelry designer was inevitable. Plumb, who is based in Chicago and goes by the nickname CoCo, said she used to play scavenger in her mom’s jewelry box as a child. Her hunts — and finds — were an early indicator to the philosophy Plumb developed as an adult. “I truly believe in dressing around your accessories and letting your style show through that,” Plumb declared.

Within the line of earrings and necklaces dripping in white sapphires, smoky quartz and pink tourmaline, a pair of leaf-motif earrings with sleeping beauty turquoise stones that sit in cascading gold leaves has been a bestseller.

“Everyone’s doing the long chandelier earrings, so I had to think what would make me stand out,” Plumb said. “And I am a huge outdoors person.”

For now, the line, which wholesales from $100 to $975, is carried at specialty stores around Chicago and in Newport, R.I. But Plumb would love to expand her distribution into department stores like Barneys New York. The line has annual sales of $200,000.

As for opening her own boutique, she said that can wait. She knows both the highs and lows of retail management and would prefer to stick with the singular designer role.

Once strictly apart, the fashion and fine jewelry and watch worlds are on a collision course that is creating some dazzling synergies. Case in point: Concord’s new Soiree watch comes inside a limited-edition, crystal-adorned black Judith Leiber evening bag. The design is exclusive to Concord, with the bag’s clasp mirroring Soiree’s rectangular, tonneau or oval case designs.

It’s a natural collaboration, said Concord’s president, Fred Reffsin. “The name Soiree means evening, which took us to Judith Leiber, the defining brand when it comes to elegant evening handbags. We share common brand values and common distribution, and a customer base, as well.”

The elegant 18-karat white gold Soiree is available with a diamond-set bezel and cube bracelet or a mesh bracelet, and retails from $8,990 to $10,900. It will launch at Neiman Marcus and specialty stores nationwide in September.

“We see a return to sophisticated style and elegance, but still understated and refined,” noted Reffsin. “When you read about style and entertaining, the word soiree is making its way back into the vernacular.” — M.K.

De Grisogono, the Geneva-based jewelry and watch brand, is celebrating its 10th anniversary this year, and it’s come a long way, thanks to its enterprising and imaginative founder Fawaz Gruosi.

Gruosi, who was born in Damascus, Syria, always gravitated to bling. As a teenager, he moved to Florence to work around jewelry studios and went on to hone his jewelry-making skills at Harry Winston and Bulgari. But it was only a decade ago that Gruosi decided to strike out on his own.

“I got fed up working for other companies and not believing in the product,” he recalled. “I told myself that it was now or never. I had so many ideas.”

But his most strikingly original one came when he was thumbing through a jewelry book and spotted a peculiar and then unfashionable stone: a gigantic black diamond.

“Black diamonds were thought to be ugly,” explained Gruosi. “But I knew that black jewelry could be beautiful.”

After all, Gruosi knew that black was the staple in any fashionable woman’s wardrobe. “Almost every woman in fashion has a little black dress,” he said. “At that time, black was everywhere. Armani was doing black. And Coco Chanel loved black. Black is sophisticated, sexy and mysterious.”

His gutsy creations paid off. Soon the rich and famous were queuing at his door. Gruosi branched out, experimenting with stingray (before many of his competitors) and introducing a line of bold, oversized watches with an average price tag of $12,000.

Today, he operates boutiques in Geneva, Gstaad, London, Paris, Porto Cervo, Rome and Saint Moritz, with franchise operations in Moscow, Kuwait and Hong Kong. Gruosi, 51, will mark De Grisogono’s 10th birthday this fall by opening his first store in the United States, at 824 Madison Avenue, on the southwest corner of 69th Street.

De Grisogono had revenues of about $53 million last year.

Despite his rapid success, Gruosi said he wants to retain the “couture” quality and size of his business. “I will only open another two shops and maybe another 10 franchise stores,” he said. “You have to stay exclusive.”

Indeed, Gruosi’s creations are exactly that. His opulent, one-of-a-kind baubles, which mix a modern, graphic touch with Gruosi’s love of the past, can run into the millions of dollars.

“Our difference is in the detail,” he said. “We have very tight settings and details that don’t always show, but that always make the difference in the quality of the jewels.”

And who is his client? “A woman who works and who can wear the jewelry in the day without being too dramatic,” he explained. “It’s not only to look rich, but something that can be worn with jeans. I design for strong women.”

Gruosi should know what he’s talking about. His wife of eight years is Caroline Scheufele, vice president and creative director of Chopard, which is owned by Switzerland’s Scheufele family. Two years ago, Chopard acquired a 49 percent stake in De Grisogono to finance expansion.

“I’m working with my enemy,” quipped Gruosi. “We’re the only couple in the entire business who are married and competitors.” — Robert Murphy