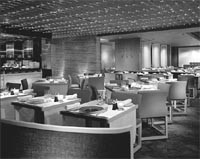 ASIA
Artistic Options
If you’re looking for the locals in early spring, check out The Hong Kong Art Festival. The event will be in full swing Feb. 3-March 7 and always draws huge crowds. The 2004 event, like its predecessors, will feature a wide array of performances and exhibitions, including dance, opera, musical theater, drama and jazz. Already selling fast are tickets for the Komische Oper Berlin’s performances of “The Merry Widow” (Feb. 5-6) and “Fidelio” (Feb. 7). Also generating local interest is the first-time appearance here of vocalist Bobby McFerrin. The show, scheduled for Feb. 9-10, will feature classical musicians, canto pop stars, a children’s choir and a martial arts master. For insight into the art scene in Greater China, there also will be a staging of Cantonese opera and an exhibition of paintings by influential artist Liu Guosong. A complete list of events, scheduling and ticketing information can be found at Hk.artsfestival.org or by calling the inquiries department at (+852) 2824-2430.— Constance Haisma-Kwok

Spoon Fed
Hong Kong may be known for its skyscrapers, harbor and penchant for business, but when it comes to visiting there, there is only one question worth asking: What’s the latest dining hot spot? The answer is simple these days, because everyone who’s anyone is talking about Spoon. The famed French chef Alain Ducasse — the only chef in the world with nine Michelin stars — has opened the latest incarnation of Spoon at the InterContinental in Tsimshatsui, the city’s shopping and tourism mecca.

Tout Hong Kong is talking about Alan Chi’s decor, including shimmering spoons hanging from the ceiling, two-story-high paned windows that overlook Victoria Harbour and the glass-walled chef’s table located in the open-air kitchen. But what really has tongues wagging is the menu. Ducasse designed it to reflect the world, with different ingredients, cooking styles and preferences in mind. Each patron chooses a main course, a sauce and accompaniments from three columns of mouthwatering options, leaving a dizzying array of possibilities.

ENGLAND
Early Bird
You can try, but booking a table at London’s new restaurant The Wolseley is next to impossible. However, turn up at night and you could get lucky — the café and restaurant keep a third of all tables unreserved.

Located in a Grade II listed building on Central London’s Piccadilly, The Wolseley is a grandly designed venue by joint venture CKL Restaurants Ltd., the partnership of Chris Corbin, Jeremy King and David Loewi. Corbin and King were previously the owners of A-list diners Le Caprice, The Ivy and J. Sheeky, and Loewi was the managing director of Conran Restaurants Ltd.

Open from 7 a.m. until midnight, the café has a menu that includes snacks such as hamburgers, salt beef and mustard on rye sandwiches, Breton hot dogs and afternoon tea, while the restaurant offers traditional European dishes, including escargots à la Bourguignonne and tartine of foie gras to start and Irish Stew, roast skate wing with capers and cassoulet de Toulouse to follow. 160 Piccadilly, London, 44-207-499-6888.— Nina Jones

On view Feb. 5-May 31, the exhibition spans five decades of Beaton’s career, showing celebrity portraits of Mick Jagger, Audrey Hepburn, Marlene Dietrich and Elizabeth Taylor alongside pieces that chronicle Beaton’s time as an official WWII photographer and the 1939 commission from the British royal family. Highlights will include Beaton’s 1956 portrait of Marilyn Monroe, from her own collection, which is accompanied by his handwritten eulogy of her.

Available, too, are chocolate tastings, cooked up by Albert Adriá, one of Spain’s best-known pastry chefs, and brother of Ferran Adriá who — with three Michelin stars — has single-handedly changed the worldwide credibility of Spanish cuisine.

So far, the chocolate shop has caught on with such Spanish celebs as Nati Abascal’s handsome son, Rafael, duke of Feria, and younger brother, Lui,; and wunderkind model Eleonora “Bimba” Bosé, who is five months pregnant — reason enough to be into the sweet stuff. Orellana 4, Madrid, (34) 91-319-5840. Open 9 a.m.-9 p.m. Closed Sundays. — Barbara Barker

The British Invasion
On an afternoon stroll, take in the latest British additions to Milan’s designer shopping district. First stop is Burberry, where their lines Burberry Prorsum, men’s wear, women’s wear, accessories, fragrance, children and home are sold. A nickel-and-glass staircase connects the spacious three levels, which have all been designed using British materials, including Welsh slate and English oak floors. Artworks by young British artists are hanging on the walls and an installation dedicated to British weather appears in the “Rain Room,” where you can also order a made-to-measure famous Burberry trenchcoat. For a pair of shoes to match the coat, visit the boudoir of Jimmy Choo just up the street. The English shoe creator shods many elegant heels with his handcrafted stilettos, and the new Milan Forties-inspired boutique has been designed with curved lilac armchairs and alabaster lamps as a dedication to feminine style. Burberry, Via Verri 7, Milan, (+39) 027608201. Jimmy Choo, Via San Pietro All’Orto 17, Milan, (+39) 0245481770.— S.E.

FRANCE
Counter Culture
Look what’s on the menu at some of Paris’ fanciest gourmet destinations: tapas.

A Can-Can Do Attitude
With a show of dancers from the Moulin Rouge kicking up their heels, Galeries Lafayette recently inaugurated what it’s billing as the world’s largest lingerie department. Spread over the entire third floor of its flagship on Boulevard Haussmann, the department spans more than 28,000 square feet and boasts more than 80 brands. Sections are devoted to new trends in lingerie, luxury brands and activewear. The department covers the gamut of intimate apparel, including a G-string shop and a “Red Hot Boulevard” of suggestive lingerie for a more risqué clientele. The store is even offering private striptease classes for those who wish to put their purchases to the test. Shoppers can cool down in rest areas with sofas and water fountains. An O.P.I. nail bar, Chanel beauty corner and Fauchon restaurant round out the floor.

AUSTRALIA
A Darling Scene
Sydney’s hippest of happening night spots is found on the King Street Wharf development at Darling Harbour. In its three short months since opening, theloft cocktail bar has been christened by Sarah O’Hare and George Lucas, who picked this venue for the launch of the Pink Ribbon breast cancer awareness magazine and the “Star Wars” production and crew wrap party, respectively. Other hipsters to pass through include Prince Harry, Zara Phillips, Ian Thorpe, Richard Branson and directors Quentin Tarantino and Phillip Noyce. They’re lured by the buzz, Dale Jones-Evans’ nouveau Marrakech interiors and mixologist Mikey Enright’s creative cocktail menu, which boasts such highlights as a lychee and lemongrass martini, a saffron and fig daiquiri and “Mediterranean Calm,” made from tequila, chamomile tea and passionate fruit pulp. Executive chef Nigel Keogh, formerly of Dorchester and Savoy Hotels London and W Hotel Sydney, presides over a tapas menu noted for its Peking duck pancakes, Swedish meatballs and Kobi beef fillet. If the bar food doesn’t suffice, patrons can also head to Keogh’s downstairs bamboo- and cane-lined restaurant, Bungalow 8, with its focus on seafood, including kilo pots of mussels and the freshest fish and chips, and a selection of top local and Belgian beers on tap. 3 Lime Street, King Street Wharf, Sydney, 61-2-92994660, theloftsydney.com.— Patty Huntington