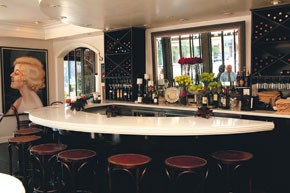 Food and fashion are as second-nature as sunscreen to San Diego. Here are a few hip restaurants and shops in the region.

THE TOBI TOUCH: It’s fitting that Tobi Blatt, a former protégé of Ron Herman at Fred Segal who worked as Herman’s assistant in the Eighties, has fashioned her own mini retail empire in northern San Diego. She opened her first women’s contemporary boutique in 1996 in Del Mar, and expanded it to include men’s and kids’ wear, a year-old beauty bar providing waxing services and makeup applications and a shoe department. Three years later, she opened a smaller unit in Encinitas. With over 260 brands of women’s apparel, accessories and shoes, Tobi Blatt offers items in sizes 0 to 20. Locals, including the wives of the San Diego Chargers and Padres, visit the store for its denim mix of 14 brands, like Great China Wall, James Perse tank dresses and Foley + Corinna cocktail frocks. Next on Blatt’s to-do list is relaunching the store’s Web site, tobiblatt.com, and taking the manufacturing plunge.

CHEAP AND CHIC: With most items priced under $100 in her store, Jackie Simpson has built a cult following for her junior and young contemporary wares at LilyGrace Boutique in Pacific Beach, especially in these tough economic times (Web sales at lilygraceonline.com have skyrocketed 50 percent in the last two months). LilyGrace caters to local college students and moms in search of Indah’s beachy dresses, Split’s Bali-print sundresses and BB Dakota’s seersucker shorts. The chockablock store also carries hard-to-find perfumes like Ebba and such indie jewelry lines as Blanc and Reed’s Bling Rings with chrome flowers and gold birds. Decorated with pink chandeliers and floral wallpaper, Simpson’s cozy space of 700 square feet prohibits having much inventory, so it’s first-come, first-sold for shoppers, who may see her daughter, Grace, playing dress-up amid the toys scattered on the floor. And, in keeping with the family spirit, Simpson’s husband runs a tattoo shop two doors down.

NEW DIRECTIONS: Hip soccer moms — not an oxymoron these days — in Mission Hills have found a fashion outpost in Christie’s Boutique, opened three years ago by a former neighborhood lawyer, Christie Thoene. Tucked amid the cluster of art galleries and salons in this bedroom community, the destination store caters to neighborhood mothers (two private schools are located nearby) who visit regularly for their fix of And Cake sweaters, Prairie Underground tunics, Trina Turk dresses and Joe’s Jeans. A handful of handbags, shoes and jewelry, like Conchita Ramirez’s delicate beaded pendant necklaces or Goryana’s gold hammered hoops, gives shoppers an excuse to revisit the cheerful store designed with powder blue and lime green walls, hardwood floors, exposed wood beams and plush upholstered chairs. And if they can’t get to the store, they can visit online at christiesboutique.com. For fashion- or time-challenged moms, manager Kat Atkinson will provide personal styling tips at home and gently nudge them into purging their closets.

PAMPER YOURSELF: Shopping at year-old Station Boutique in Little Italy just got a little more indulgent. The lifestyle store, carrying fashions like trenchcoats by Tulle, party frocks from Plenty by Tracy Reese, Modern Amusement T-shirts and Arnold Zimberg woven shirts for men, home decor, lighting, candles, rugs and books, now offers manicures and pedicures, starting at $11 and $16, respectively. The services still leave enough cash for the clothes, which range from $29 for Tulle tops to $219 for a flirty Trina Turk dress. Owners Kristi Steffen, an interior designer, and Bobby Crisman, a nurse specializing in nuclear medicine, made sure the 1,600-square-foot store’s French Modern vibe with mouldings, a white tin ceiling and hardwood floors meshed with the nail salon designed with antique writing desks and Philippe Starck chairs. Online, it’s at stopatstation.com

LINKIN’, LINKIN’…: The Linkery’s focus on not only what you eat, but also in what environment and where it comes from, has been a winning formula for the last three years, prompting the restaurant to move to a bigger location in May that more than doubled its space to 5,000 square feet with a 150-seat capacity. Founder Jay Porter serves an array of grass-fed meats and organic vegetables and fruits produced by independent farmers who often receive a plug on the menu. Diners can read the blog about the origins of the food, or check out the menu at thelinkery.com, where eye-catchers include carrot ginger soup ($7.50), pan-seared fluke with a blood orange vinaigrette ($18.50) and house-cured sausages ($9 to $19). Vegetarians can opt for garden lasagna and Portobello tacos. Inside the aubergine-colored building, the restaurant hews to a “preindustrial perfect” motif with roll-up garage doors of glass, reclaimed wood tables and a salvaged bar from Indiana. Diners can spy the servers and chefs at work in the central kitchen, keeping the food prep transparent as well.

FRENCH TREAT: San Diego’s once-grungy East Village has classed up and Café Chloe’s arrival in December 2004 only helped spur that gentrification. Inspired by the clean, unsauced fare of French bistros, its founders and partners, Tami Ratliffe, John Clute and Alison McGrath, who have 60 years of restaurant experience among them, have created the go-to neighborhood spot for the area’s artists, students, architects and designers, who often visit more than once a day for a quick cappuccino or crème brûlée. The edited menu changes frequently — check it out at cafechloe.com — but there are always staples like mussels with saffron broth, steak and frites, the signature macaroni and gorgonzola gratin with pancetta and the smoked trout and apple salad. Prices ranging from $7 to $12 for breakfast, $10 to $15 for lunch and $12 to $21 for dinner. The owners plan to go green and serve only locally or sustainably grown foods.

ROOM WITH A VIEW: Open kitchens were once the restaurant rage. Now, The Guild restaurant in East Downtown, six blocks south of Petco Park, is taking that experience to a new level. Patrons of the year-old eatery, designed with bamboo wood and stainless steel furnishings, can look through a window into a metal fabrication shop, where workers weld furniture, staircases and domes. The industrial atmosphere honed by owners Linda Karp and Paul Basile belies the refined cooking of chef Craig Jimenez, who churns out American recipes with an international twist, such as Kobe beef sliders and chevre brûlée (artichoke with caramelized goat cheese served on a toastette), priced from $10 to $15 for lunch and $15 to $28 for dinner. Its Web site, theguildrestaurant.com, has details about new features like the sake lounge serving 15 varieties in the restaurant’s former mezzanine office space, info on special events, including a planned sake school and sake tastings with a sommelier. The changes are in step with the developing neighborhood, which has added condos and apartments and nightlife-seeking dwellers.

BATTLE OF BRITAIN: Foodies living more than 20 miles away in Del Mar are known to make the drive to Jaynes Gastropub in North Park to dine on rustic, European-influenced cuisine envisioned by owners Jayne Battle and her fiancé, Jon Erickson. Battle, who moved to the U.S. from England when she was seven years old, has sought to re-create her home continent’s dining experiences with robust entrées, like wiener schnitzel with spaetzle, sea bass fish and chips and braised short ribs. One American staple, however, is a customer favorite: the Jayne burger, a 7-oz. patty and heaped with house-made pickled onions, aged cheddar and garlic aioli. Natural wines, a movement that originated in France and produces wines in a traditional manner with very little technological or chemical intervention, and rare beers — like the hard-to-find Belgian ale Chimay White on tap — are also a focus. More information is available at jaynesgastropub.com. Inside, a quaint decor of hexagonal tile floors, a tin ceiling, pendant lights and lace curtains sets the mood, and outside there’s a soothing patio framed by a weathered brick wall.