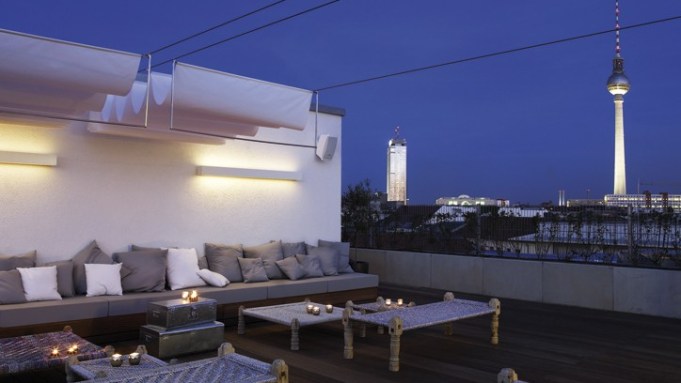 Bedding down in Berlin doesn’t have to mean basic bargain or top-end treasure. Several new design hotels are offering style and edge with a side of comfort. Most are located in the heart of Berlin’s ever-growing shopping district Hackescher Markt, located in Mitte — by its very definition, the middle of things.

The three-star Hotel Amano, a sleek yet cozy spot with 162 rooms, opened this summer, bringing with it a popular bar and a roof-top terrace, a must in temperate weather. The blend of classic and new pairs modern furniture with old patterned carpets. Hotel director Corinna Schuster insisted, “We’re also a cut above competitors,” pointing to special services like Smart Car, bike and iPod rentals. The hotel even has its own nail polish, Amano Orange, produced with Berlin-based cosmetics firm Uslu Airlines.

Nearby Casa Camper is a shoe-in with 51 stylish rooms and complementary 24-hour restaurant Tentempié for guests who need a midnight snack or a morning treat; eatery Dos Palillos serves up Asian-tapas fusion from el Bulli chef de cuisine Albert Raurich. This is only the second hotel location for the Spanish footwear firm. The four-star lodging offers natural soaps, interactive TV and personalized maps for visitors.

In Berlin, the name Circus brings to mind a beloved hostel for the backpacker set. The company’s new hotel keeps the core philosophy of a welcoming, social approach to travel, but catering to a different crowd. The decor of the 60 themed singles, doubles and apartments blends color, handicrafts and flea market finds; accommodations are also eco-friendly.

The tech-savvy staff will burn photo CDs and charge iPods for guests, while a nearby yoga studio provides classes for those needing a different kind of boost. The hotel’s restaurant, Fabisch, serves modern German fare made with local, sustainable and largely organic foods.

Further east, the funky 119-room Michelberger Hotel attracts traveling rock bands, businessmen, and families. This boutique hotel near historic Oberbaum bridge and the river Spree offers rooms with loft beds for extra space, accommodations for groups of four or more, as well as three individually designed luxury rooms. The Michelberger aims to deliver the feeling of staying with a cool and welcoming chum; which makes sense: it was started by a group of entrepreneurial friends.

Berlin is certainly not lacking in architecturally acclaimed museums. There’s Mies van der Rohe’s New National Gallery and Daniel Liebeskind’s Jewish Museum, to name but two. And the excellence of the city’s artistic and cultural collections is also well established. The long awaited re-opening of the Neues Museum last fall, however, has raised the bar on both fronts. David Chipperfield’s masterful renovation of the 19th century museum, the second to be built on Berlin’s Museum Island and severely damaged in WWII, revives what remained of Friedrich August Stüler’s richly ornamented and historically inspired interior while filling in the gaps with Chipperfield’s characteristic clarity and force.

The impressive mix of materials includes fragments of frescoes, marble columns and floors, mosaic, coffered ceilings or painted cupolas set in a graceful counterpoint with polished and unpolished cement, recycled bricks, wood and metal. And what of the art? The space showcases Berlin’s Egyptian, pre-and early-history and classical antiquities collections. And while Nefertiti may still be the reigning queen, she now has hoards of competition. If it wasn’t already a Unesco World Cultural Heritage Site (since 1999), the Neues Museum in its new form would merit a similar distinction. Visitors are advised to buy tickets with a specific time slot online to avoid waiting outside in the cold. And for those in need of other nourishment while within its walls, the cafe is tiny but also worth a visit.

Next: Fashion Blog Stil in Berlin  >>

Style in Berlin is all about the street, and the blog Stil in Berlin is the place to find the most current creative looks in town. The blog was started in 2006, making Stil in Berlin a relative oldster in the online scene. German Mary Scherpe and Canadian Dario Natale are charged with finding the style bright spots in Berlin’s sea of hoodie-and-jeans-clad masses and capturing them on film. In an old media coup, the online site has now spawned a print publication.

“It’s kind of a small statement on the whole ‘Is online killing print?’ discussion, because I don’t think it is,” said Scherpe. “And why not do both?”

Scherpe added she’d been thinking about a move to print for some time. A book was one idea, but the blogger thought simply collecting and printing the digital snaps was not enough. So the English-language book-size magazine was born, featuring articles, street shots and a shopping guide — all on heavy paper accented with richly colored photos. The blog is free, and so is its paper cousin. Funding comes from back-of-book ads and advertorials from brands like Filipa K and Lee specially shot in street style.

The first edition, which launched at the end of November, focuses on vintage fashion in its 34 pages. Berlin-based buyer-collector-vintage seller Roman Vardijian is profiled, followed by a list of some of the city’s top stores for second-hand couture, vintage fur and timeless treasures.

The next issue of Stil in Berlin’s magazine will come out just in time for fashion week, and will feature looks from Stockholm, London, Paris and Milan Fashion Weeks, as well as a collaboration with Urban Outfitters. Scherpe will be featured on a fashion bloggers panel at the Premium trade fair, and will video interview International Herald Tribune fashion editor Suzy Menkes for the event.

The plethora of places to eat, drink and lounge in Berlin is constantly growing. Here are three of the best new places in town.

Despite its diminutive proportions, Bar 3 has been the favored meeting place of Mitte’s media types for the past few years, and with the recent opening of Restaurant 3 next door, they now have somewhere close to go for sustenance before drinking. The bar-restaurant duo are tucked away on a small street behind the sturdy Volksbühne theatre, but come Thursday evenings, Bar 3 is heaving with well-heeled young Berliners, sizing each other up through thick-rimmed spectacles. The restaurant is relaxed and homey, with a daily menu of fresh homemade soups, quiches and salads, priced from around $6.

Kreuzberg is still one of Berlin’s best-loved areas for the young and bohemian, and while summer hot spots along the Spree have gone into hibernation, there are several new establishments offering locals a welcome escape from the winter chill. The proprietors of the coffee shop Early Bird Café on Stralauerstrasse made tracks around the corner and opened Nest, across the road from Görlitzer Park. The fledgling hot spot meets the requirements of the now popular Berlin hybrid of relaxed cafe and exhibition space. The bright, green-tiled cafe at the front is perfect for drinking coffee and whiling away an afternoon, and the wooden dining room in the back is the place to enjoy a delicious but uncomplicated menu of meat dishes, hearty German broths and seasonal salads. Prices start around $5. Just up a spiral staircase are temporary exhibitions.

With its austere interior, new Kreuzberg restaurant TinTin may have no obvious relation to the Belgian cartoon character, but it is a welcome addition to the row of canal-side eateries on Paul-Linke Ufer. The decor is slick and minimalist, with hefty gray stone tables and bare bulbs hanging from the ceiling. But what else would one expect from Thomas Karsten, the man responsible for the interior of Berlin’s most hedonistic industrialist nightclub, Berghain? The food is European; pastas, Mediterranean platters and top-notch steak, at prices starting around $10. TinTin is spacious, artfully designed and painstakingly cool. They also serve fine German wine, which ironically, is often hard to find in the German capital. There is plenty of room for dancing around the bar to techno after dinner while sipping a delectable TinTin house cocktail, made with vodka, ginger and Champagne (around $9).

Party people like Berlin because Berlin likes party people. And according to one club owner, local authorities “are quite open and liberal and you get what you want,” allowing clubs off the beaten path a chance to crop up.

One of the city’s most recent additions is the Jesus Club, a subsidiary of the more established Maria am Ostbahnhof and its second venue, Joseph. Launched in November, Jesus Club is the third and smallest of the family, and the most program-oriented: its club lineup revolves around art, dance and jazz. Behind the doors (with riverside entrance), there are no boundaries between musicians and the audience during performances. The club also remains fully lit on many nights for guests to be able to see the surrounding and constantly evolving program of art installations and dance performances. The bar card is limited, but musicwise, the range is wide: jazz one night, electronic music the next.

However, unlike its two sister venues, the Jesus Club is only temporary, enriching the city’s nightlife until March before a new concept sets up there for the summer.

Also coming in March is Hardcover, a new literary club in Berlin’s Mitte, which will present a bimonthly program of readings and acting performances in conjunction with a more classic open-end nightclub concept. The club will kick off with some Serge Gainsbourg texts, part of a yet-unpublished work by the legendary poet, singer-songwriter, actor and director.