PARIS — When Lady Gaga stepped out to perform the national anthem at the inauguration of U.S. President Joe Biden, the team at Schiaparelli, gathered in front of a TV screen at the haute couture house’s headquarters in Paris, erupted in cheers and sobs.

Nobody was prouder than artistic director Daniel Roseberry, the sole American in the room. His team had worked against the clock to finish the singer’s outfit in just five days. Fortunately, they still had a bust with Gaga’s measurements left over from when she wore custom-made Schiaparelli for her Las Vegas residency in 2019.

The performer navigated the steps of the U.S. Capitol in platform boots and a 13-foot-wide skirt in washed red silk faille, worn with fitted jacket in navy cashmere and topped with an oversize gilded brooch shaped like a dove carrying an olive branch (and not a mockingjay, as the Twitterverse speculated).

It marked a major coup for Roseberry, who after 10 years at Thom Browne in New York City joined Schiarapelli in 2019. He has since dressed celebrities including Beyoncé at the 2020 Golden Globes, and Kim Kardashian, who wore a green leather six-pack bodice with a draped and knotted silk skirt on Christmas Eve.

As he geared up to present his spring collection at Paris Couture Week on Monday, Roseberry talked to WWD about how Lady Gaga’s dress was born, and what it meant to him to play a small part in the historic events in Washington, D.C.

WWD: I hear that Lady Gaga had several dresses under consideration for her inauguration performance. You must have been on tenterhooks waiting for her to come out.

Daniel Roseberry: We heard from the courier when we gave them the destination address, they were like, “Oh, we have a lot of packages going to that location this weekend.” So we knew, and they were really upfront with us, too, that we were part of a group. There were a lot of contenders, I guess, so you never know. And there was a photo that was leaked the day before, because she was doing a rehearsal, and it was taken from really far away and I saw it, so I knew we had a good chance.

We all gathered here and watched it on the TV, and the whole team was shocked, and it was incredible. I’m the only American here, so it was this really special dynamic between them, knowing what it meant to me to be able to be a part of that moment. I just get emotional, because it was so special for me personally.

WWD: What did it mean to you to have a hand in this particular inauguration?

D.R.: I had been a part of the Thom Browne inauguration because I worked on Michelle Obama’s second inauguration coatdress, and so I had experienced more secondhand what it was like to participate in a moment where fashion can kind of transcend itself. But it’s so different this time, just because it was so personal. I felt, like a lot of Americans over here, sort of helpless watching everything go down and my heart just breaking from afar. It was healing in and of itself for me to go through a creative process that would be even in consideration for the moment. And obviously, I’m a huge fan of hers, and so blown away by the gall and the gumption to get up there and meet the moment like that. So to put clothes on the back of somebody who is that brave, and that courageous, is also so inspiring. But I was so nervous. My heart was in my throat. It was just an amazing honor. 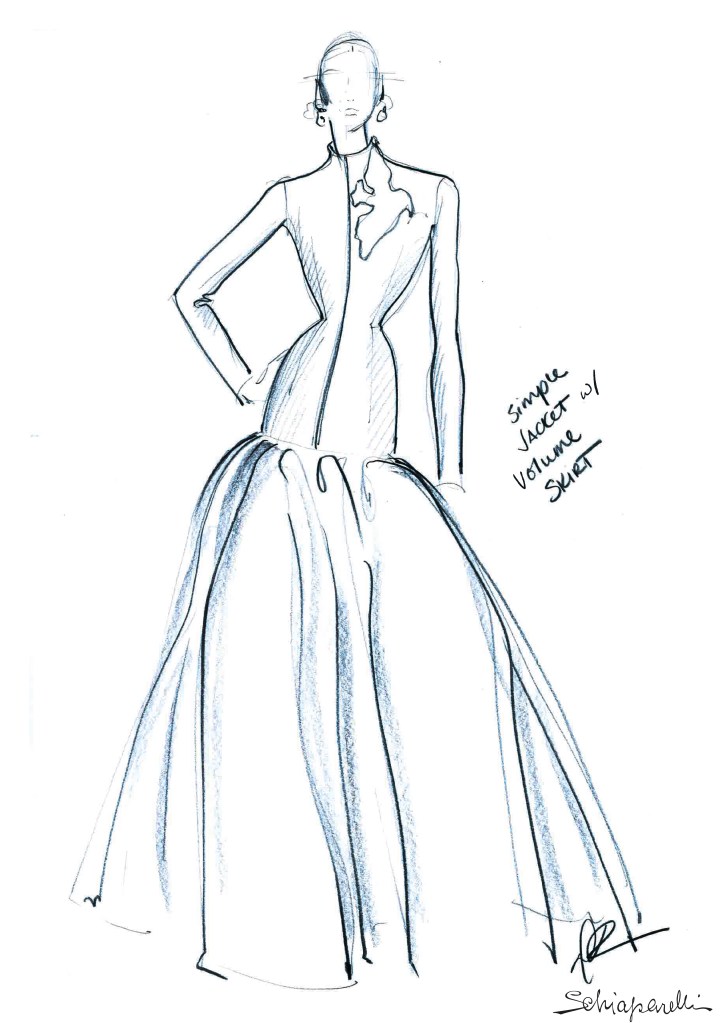 WWD: Everyone’s eyes were on the bird brooch. What symbols did you want to put into the outfit?

D.R.: All that she said was that she wanted to imbue the look with meaning. That was a week and a half ago, when we got the brief, and so I just went and sketched in my studio downstairs. We sent a few different options, but that was the only message that I felt worked, because originally the brief was “all white.” And so I was thinking, OK, all white with a gold dove.

That was an image that I associate with my mom, so it just was a really instantaneous kind of natural idea that she really loved. But as far as the political part, like the colors, I think that that was more a reference to the flag than to the party colors.

For me, the message was one of healing.

WWD: How did you get the dress made in less than a week?

D.R.: We had extra hands come on to finish [the spring haute couture collection] and then we had our best hands on [Lady Gaga’s dress] around the clock.

I don’t think there were any alterations. And that was the second time: when we did the Kim Kardashian thing, it was also done without a fitting. And I’m just so blown away by the skill here, because to be able to do that with no alterations is so insane.

They’re just so gifted here. I’m so proud of the work that has been achieved.