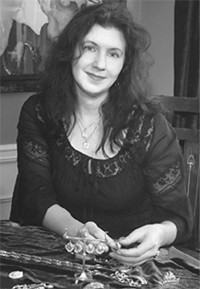 LOS ANGELES — If “The Matrix” has spawned anything, it’s die-hard fans. And Dana Schneider ranks right up there.

In fact, she loved it so much that within a month after the 1999 release of the first in the trilogy, the jewelry designer packed up, bid goodbye to her showroom and retailers and left New York for Hollywood without a clue or connections to meet her mission.

After 15 years of chasing fleeting fashion trends, Schneider, who works out of her home in Studio City, the entertainment industry ’burb just over the hill from Hollywood, “loved the idea of being part of something that will live on.”

In three fast years, she’s racked up 17 film credits with her weighty, labor-intensive pieces, while distinguishing herself in a tightly closed industry. “Agents don’t know what to do with me,” she mused. “No one represents a jeweler in films.”

But her jewelry is well represented in them. Besides the last two “Matrix” films, her recent blockbuster credits include “Terminator 3: Rise of the Machines” and “2 Fast 2 Furious,” along with the upcoming, “The Chronicles of Riddick” (2004), the second in a trilogy with Vin Diesel, and the Winona Ryder-comeback vehicle, “Eulogy.”

“A lot of people think movie jewelry is plastic or pop metal or something crappy. But costume designers, and a lot of directors, like the Wachowskis [brothers Larry and David of ‘The Matrix’] or Tim Burton [for ‘Planet of the Apes’] want something real and special.”

Her repertoire ranges from prosaic brass belt buckles for Ben Stiller in the upcoming “Starsky & Hutch” to the ice-like Plexiglas ring for Halle Berry in “X2.” When 2001’s “From Hell” called for Victorian-era mourning jewelry, she found human hair at a local beauty supply and learned to weave and needlepoint it into silver rings, broaches and tie tacks.

She declined to specify her budgets, but it’s clear compensation doesn’t always match labor time. A love of cinema motivates her through long hours and the maddening deadlines to satisfy a director’s vision. Jennifer Garner’s “Electra” pendant in “Daredevil” underwent countless carvings and 100-plus hours, along with studying early Greek and Egyptian lettering, before having the camera-ready ideal.

“That’s the funny Hollywood thing,” she observed. “You have to blend reality with what looks good on the big screen.” Another lesson: “If they really want something, they’ll find a way to pay for it.”

All her molds are kept intact, should anything go awry during shooting. And surprisingly, despite this merchandise-mania world, Schneider hasn’t made her film works available to the public. With the cult obsession for “The Matrix” and “X-Men” series, even pricey replicas would find a consumer following. But Schneider, who keeps an unlisted number to avoid the public intrusions that often befall costume designers on those films, isn’t fazed. “I don’t really care about selling to fans,” she shrugged.

She is selling her alphabet pendants, each of silver and 18-karat gold, retailing at $190, and slim cuffs, $350, at local boutiques Henry Duarte and Tracey Ross and Dari in Studio City.

Film work has lead to custom orders from her favorite rockers — members of Slipknot, Fear Factory and Marilyn Manson. “Manson first got my ring from an actor who worked on from ‘From Hell.’” The patronage is now mutual: One of Manson’s paintings hangs in her dining room.

It’s another reality for this Rhode Island School of Design grad, who opted out of pushing her sculpture in the Eighties New York art scene (“A woman artist trying to make it then? I didn’t have the personality for the parties and the politics,” she recalled) for a soldering gig at Tiffany & Co., where she saw first-hand how “women use and abuse their jewelry.”

The movie route has different challenges from retail, of course. “I don’t know that there’s a lot of money in this. I’m just a hard-core film buff, so I get satisfaction. I mean, I get to be a part of a different kind of fashion history.”