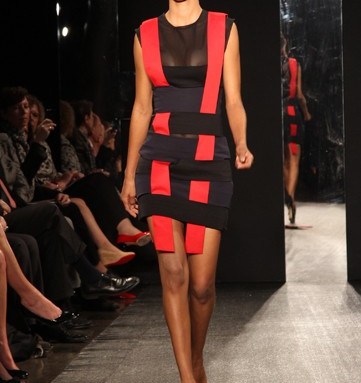 So what can the coeds expect from the real world? “In the beginning, everything is a challenge,” said Herrera, postshow. “I cannot point to only one thing, but I think challenge is very good because then you do better.” Klein offered his own reality check for the students, noting that he wasn’t thrilled with his first job out of school at a coat and suit manufacturer on Seventh Avenue. “I didn’t stay long,” he said, “but it was a start. You have to begin somewhere.” And while Rodriguez was fairly Zen about the process — “I felt there were no real surprises; there were long hours in school and long hours in work” — Kamali added that, in many ways, alums today have it harder. “You don’t just have to be talented,” she remarked. “You have to be a good marketer, good at business, good at visual communications. It’s not just about ‘I like to design.’ ” Which may be why she was so tough on her students. “I was disappointed that more of them did not do that something extra with passion,” she said. “So I went back and told them that. There were some fabulous students that needed a kick.”

Consider her mission accomplished. A few of them, spurred by Kamali’s words, plan to revamp some of their looks and re-present them to the designer at a later date.