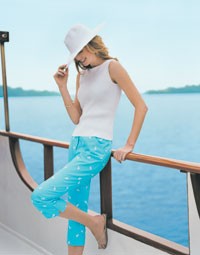 At 11 percent of the $4.85 billion Liz Claiborne portfolio, or about $533.5 million, the moderate market is an important portion of the company’s bottom line.

But Paul Charron, chairman and chief executive officer, said keeping these brands in the portfolio was a bit of a fight at first. He said that when he started at the company in 1994, the people working on the Liz Claiborne brand thought there was no room for the moderate crowd.

“They wanted absolutely nothing to do with these brands,” he said. “They would spit at the thought of them. I had to change that so that they could all work together and successfully share their resources.”

When Charron came in, the firm’s primary income did come from the core Liz Claiborne brand. However, he said that he knew that brand “couldn’t be all things to all people.” He knew that these in-house developed moderate brands had the potential to serve a whole new customer base.

“Just because this shopper has a lower income level, that doesn’t mean she doesn’t want fashion at [lower] prices,” said Karen Murray, group president at Liz Claiborne Inc. “We began launching these brands because we felt that we could bring what the customer wanted to this channel of distribution.”

The result is a collection of six moderate brands, each one exclusively tailored to the needs of the retailer they are sold in. There’s Villager and Axcess at Kohl’s, as well as Stamp 10, a new denim-based brand just launched at Kohl’s last month.

“Villager is classic, Axcess is a bit more modern and Stamp 10 is a bit younger and casual,” Murray said. “We have a strong partnership with Kohl’s and have a full understanding of what they want to do. We are building lifestyle brands with them, complete with licensed product, such as boys’, men’s, shoes and hosiery for Axcess, tabletop and home for Villager. They came to us to next build a denim lifestyle brand, knowing that we already had brands like Lucky and DKNY Jeans in our portfolio. So we came up with Stamp 10, which is still in its infancy stage, but we are really excited about the possibilities.”

Then there’s First Issue, a brand developed for Sears.

“Rather than launch a bunch of brands, Sears wants to focus on one as a power brand. They want to build it to include many categories,” Murray said.

For now, First Issue offers women’s wear, dresses, shoes, sleepwear and suits. Murray said the brand has grown each year and there are plans in the works to launch more categories like men’s wear.

In 1998, Claiborne launched the Crazy Horse brand with J.C. Penney. Today, that brand brings in double-digit growth for the apparel giant. In 1999, it launched a men’s wear component, followed by dress shirts, neckwear, accessories, tabletop and home products.

“Just recently, they came to us with the idea of launching a denim brand,” Murray explained. “It seems to be a growing sector for the midtier market. So we just launched Tint with them, a brand we hope to make a lifestyle with them. There’s great potential there.”