Determined to pump up its $10 billion fashion business, Sears named a new apparel chief and a president and chief executive of Lands’ End Inc. 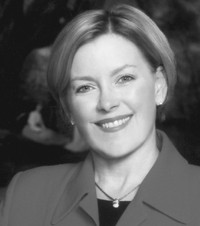 NEW YORK — Determined to pump up its fashion business, Sears, Roebuck & Co. on Wednesday hired Gwen K. Manto as executive vice president and general manager of merchandising and design functions for all of the retailer’s apparel, footwear and accessories, and Mindy Meads president and chief executive officer of its Lands’ End Inc. unit.

Manto succeeds Meads, who had a dual role of unusually large proportions. She was overseeing Lands’ End and the rest of Sears apparel. Now Meads will be able to focus on Lands’ End, where she worked for 11 years before being integrated into the Sears organization after Sears bought Lands’ End in June 2002.

Last fall, Lands’ End was rolled out to all Sears stores. While Lands’ End is considered one of America’s top moderate brands, having mass appeal, value and classic styling, it has yet to be maximized at Sears stores and presented in a way that sufficiently distinguishes it from other Sears labels.

Addressing those issues, Meads in an interview Wednesday said, “This past fall, we started making changes in the store to bring visual enhancement. There is a lot more to be done and not just with Lands’ End, but with our other brands, too. You will see more [heading] into spring. The main thing is that in the last six to nine months, we have been really working to get stronger brand definition. We have been on a continual upgrade. We have been getting a good response to new fashion in the store. This is an evolution.” She added that Sears appeals to different customers and that the goal is to have each of its brands targeted to different customer segments. “Each brand will stand true to that customer,” she said.

“There is an opportunity to grow Lands’ End in Sears stores,” added Meads, who characterized the introduction of Lands’ End to Sears as successful. Asked if freestanding Lands’ End stores are being considered, Meads replied, “We have talked about it, but we do not currently have plans for that.” Currently, Lands’ End is sold through catalogs and the Internet, as well as at Sears stores.

Since selling its credit business last year, the pressure is on Sears to improve its remaining retail operation, particularly apparel and soft home goods. The two categories combined account for 40 percent of Sears’ volume and floor space, but only 30 percent of its customers buy those products.

The Sears appointments are both effective Feb. 1.

Manto was hired by Sears because of her wide experience in various softline categories and store formats. Two months ago, she was vice chairman and chief merchandising officer of Stein Mart, a regional off-price specialty chain, which recently has seen its performance slip. However, Manto is credited with building an assortment there with a consistent taste level across categories, whereas most off-pricers tend to have less even assortments.

“The greatest challenge is to [build on] the work that Mindy and Alan have done and put an emphasis on the apparel business,” said Manto, who is 49. “Sears is at the beginning of a great new strategy.”

Other key proprietary brands integral to the strategy are Covington, a family-oriented brand geared to 25- to 45-year-olds, and Apostrophe, a more updated, career-oriented private brand with a similar age demographic. Both labels are slightly younger in appeal than Lands’ End, which caters to 35- to 55-year-olds with a slightly more classic offering and higher prices.

Sears continues to search for brands to purchase. Late last year, it bought Structure, which was a men’s label owned by Limited Brands. Plans for Structure have yet to be announced, though the company said it’s considering the brand for men’s and women’s merchandise. “We are always looking for great brands to provide,” said Meads, who is 51.

Kirk Palmer, of Kirk Palmer & Associates, who did the search, characterized Manto as “foremost a merchant, a strong leader and a driver of businesses. Sears has tens of millions of women visiting their stores every week. Regardless of what people may say about Sears’ apparel, it’s still a $10 billion business. The challenge is to refine the apparel assortment and get people to spend more.”

“Gwen has a diversified background, relevant to a national chain. It’s rare to find someone with such exposure to a variety of apparel and footwear areas,” said Elaine Hughes, of executive search firm E. A. Hughes & Co.