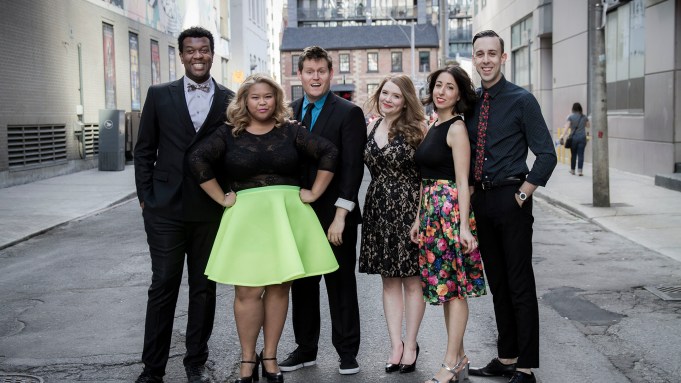 Come July 1, every Canadian with a hoser in his or her heart — and there are millions of them — will take to their cottages, stretch out on those sun-warmed decks, beer in hand, and let those words trip off their lips in celebration of the Great White North’s 150th anniversary.

Indeed, for actress Ann Pornel, one of the new generation of actors performing in The Second City in Toronto, Canada’s milestone birthday offers the perfect opportunity to revisit the very essence of that “bad in plaid” persona made so famous in the Seventies and Eighties by SCTV’s hapless hosers, Bob and Doug McKenzie, portrayed by Rick Moranis and Dave Thomas. (Details about Pornel’s milestone performance for the company will be released in July.)

“I was five years old when I immigrated to Canada from the Philippines, so plaid flannel shirts and bed linen did not fill my home or define me as a human being. I never wore denim on denim. And my go-to stores were never Hudson’s Bay or Roots — although the stuff they sell is top drawer. But when you look past all those ‘eh’s’ and brewskis [slang for beers], there’s definitely more to this hoser mystique than meets the eye,” a wry Pornel told WWD.

“Sometimes people equate the hoser look with everyone wearing cowboy hats in Canada, which is just not true,” Pornel said. “Canada is so much more diverse than that. Hell, look at me,” she laughed. “When I walk down the street, people see me coming in all the big, loud colors and flower patterns I love to wear.”

Whether you love it or hate it, the hoser image has done something quite remarkable in terms of comically differentiating Canadians from their U.S. neighbors, according to this University of Toronto science graduate who first discovered her true calling while doing sketch comedy back in high school.

“Hoser style couldn’t exist without that sense of self-deprecation or that kooky, self-vain humor that is so quintessentially Canadian. But no matter what side of the bacon you tack to it, I’d say Canada’s deep-seated ‘hoserness’ is really a comic cry to find out who we are and shout it to the world” said Pornel, who writes for CBC’s “Baroness von Sketch Show” and performs in Second City’s current comic revue, “Everything Is Great Again.”

Poser does give a thumbs-up to certain hoser staples, like the all-purpose wilderness boot and the comfy, cuddly toque. “I can’t fault them in any way,” she smiled.

But other hoser essentials get under Pornel’s skin, she admits.

Take, for example, the hockey jersey worn by diehard hosers to christenings, court appearances, bar mitzvahs, job interviews, blind dates, jaunts to the curb to fetch the morning paper, and a host of other occasions.

“My response to people who wear hockey jerseys to everything — even their own weddings — is try harder,” Pornel laughed. “Unless you are going to a hockey game, get your life together and put some clothes on — now!”

Then there’s the plaid flannel shirt, the veritable Holy Grail in the hoser’s handbook of style.

“Many hipsters today have adopted this item and turned it into a universal fashion find. But when I see every single man out there wearing plaid flannel, it makes me crazy,” Pornel said. “Again, I say, ‘Try harder people!’ Who wants to look like they put on the first thing they found on the floor when they rolled out of bed?”

Next on Pornel’s hit list is top-to-toe denim — a look that thrills hosers right down to the soles of their Kodiak boots.

“It’s always the dads who wear this jeans on jeans thing. But dads are busy guys. They’re allowed to dress with this kind of shlubbiness. Everyone else — including all my friends who call it chambray, not denim — should just build a campfire outback and plop this stuff on top,” she said.

Finally, Pornel can’t forget the donuts, air fresheners and other homey items scented with the smell of bacon — another major faux pas in her books.

“If I smell bacon waft through the air and no actual bacon can be found nearby for human consumption, that is beyond upsetting. It’s insanity, I tell you. There’ll be mayhem in the streets because of this travesty,” Pornel mused.

Yet before every hoser cries in his or her Tim Hortons’ coffee mug, Pornel leaves us with this final fashion plea as Canada gets ready to celebrate its big birthday.

“Most Canadians spend three-quarters of the year looking at people in their coats because it’s so darned cold here. But I want every hoser out there to hear this,” Pornel said. “Check out Moose Knuckles. Try Canada Goose. I beg you. Toss out that parka you bought 30 years ago at Eddie Bauer and get some cute, functional fashion in your life — now!”