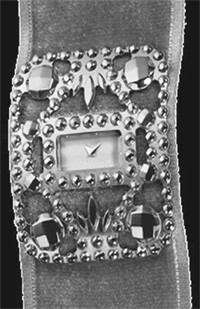 MILAN — Sector Group is quickly becoming the next watch powerhouse.

Over the past two years, the Italian watchmaker has signed licenses with a range of fashion houses such as Roberto Cavalli, Moschino, Valentino, United Colors of Benetton and Mariella Burani. In addition, the company makes its own Sector line, as well as the PZero line for giant tire manufacturer Pirelli, and the more classic, high-end Philip Watch line.

“Our goal is to become the Luxottica of timepieces,” said Enrico Ceccato, chief executive of Sector Group, in a recent interview here.

This week, Sector is debuting its array of new watches in New York, marking the first time most U.S. retailers have seen its products. The company is in the process of developing its U.S. division, which will be based in Los Angeles and called Quadrante — which means “dial” in Italian. The business here will be overseen by Mary Swan Lewis and Walter Sim, both of whom were previously with the Swatch Group. A party celebrating the new direction of the company is planned for Wednesday night at the Bryant Park Hotel in New York, where key executives are expected to attend.

Lewis said the company is targeting fashion-forward retailers in the U.S. such as Bloomingdale’s, Neiman Marcus and Saks Fifth Avenue, as well as Tourneau. This month, Bergdorf Goodman will open a PZero corner and display the line’s clothing, footwear and watch collections in its windows for most of the month.

“Sector Group has innovative design and we interpret the designer brands into watches,” said Lewis last week as she prepared for the U.S. launch.

The Sector watch brand already existed when the investment fund, Opera, backed by Bulgari, took control of the group in July 2001. “The group was financially troubled, but we realized that the Sector brand had a lot of potential and that we could turn the company into a producer for designer watches,” said Ceccato. He expects 2003 sales to reach about $117.3 million, a 30 percent increase compared with last year. (Dollar figures are converted from the euro at current exchange rates.) Sector’s watches now account for about 14 percent of market share in Italy, according to information provided by Lewis.

Ceccato noted that although the watch industry has suffered a 9 percent drop in sales over the past year, the designer watch segment reported 28 to 30 percent growth in that period. “Customers now tend to view watches as accessible accessories, worn to complete an outfit or to suit their mood,” said Ceccato, adding that 85 percent of designer-branded watches are purchased by women, while men are generally more focused on mechanical details and function. “This trend is changing, though, and younger men are increasingly attracted to more of-the-moment timepieces,” he noted.

For most of the brands Sector is working with, this is their first entries into the watch arena, which has seen an influx of new brands in recent years, including big names such as Louis Vuitton. Sector’s design team is headed by Franco Bosisio, the group’s art director, who previously worked at Damiani and Swatch. Bosisio works closely with designers so their respective lines reflect their ready-to-wear collections and feature distinctive brand elements: the Valentino V and more romantic and feminine touches detailing the couturier’s line, and the heart-shaped pendants or the symbol of peace decorating the Moschino line, for example.

Most of the fashion brands sold through the Sector Group retail between about $200 and $700 and are made of materials such as stainless steel, silver and leather. The bulk of offerings have quartz movements, and some are adorned with stones such as turquoise, onyx and Swarovski crystal. Ceccato said it was easier to work with those designers who understand that these are accessories positioned between costume and fine jewelry and whose prices should not be higher than $700. Among the brands Sector Group competes with at this price point are Michele, Burberry, TechnoMarine and Gucci, said Lewis.

“Many designers aim to place their branded watch collection in the high-end range of the market, but customers in that range are very conservative and would rather turn to classic Swiss-branded watchmakers or to jewelry houses,” Ceccato noted.

He said Sector is containing costs by outsourcing components in the Far East and Eastern Europe, and assembling them in Switzerland, although some styles are completely Swiss made.

Sector joins a crowded field that is dominated by big conglomerates such as Compagnie Financière Richemont AG, Swatch Group and more recently, LVMH Moët Hennessy Louis Vuitton. Nonetheless, executives feel there is room for its offerings.